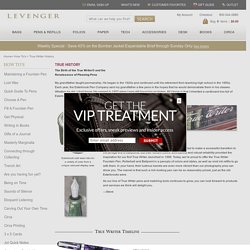 Prior to the Civil War, people still used quills, cut with pen knives. In 1920 the company introduced its first fountain pen, providing the mainstream market with a high-quality writing instrument at a reasonable price. It filled from an inkwell or bottle, as did all fountain pens then. It was a rugged little pen with a steel nib, and came in a variety of colors. True Writer Carries on the Tradition Esterbrook, after being one of the most popular pens around, failed to make a successful transition to the jet-age era of ballpoints.

As our line of True Writer pens and matching tools continues to grow, you can look forward to products and services we think will delight you. —Steve. Parker Pens Guide: Sonnet. N 2003 the complete Sonnet line got a face lift and was reduced to 12 designs. 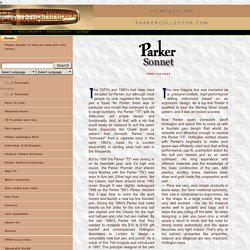 The pens were now fitted with a flatter clip screw and the broad cap band now looked like it was made in two parts, fitted very closely. It also got the engraving "Parker". The Cicelé remained and two new top desings were introduced: Chiselled Tartan GT (gold trim) Chiselled Tartan ST (silver trim) The Laque black, Matte Black and Flighter models now all had a choice of trim: Laque Black GT Laque Black ST Matte Black GT Matte Black CT Flighter GT Flighter CT And three new Laque pens were introduced: Laque Ocean Blue Laque Verdigris Laque Ruby Red This line-up remained until 2007, when a new design was offered: Monochrome, in an angular design This must have been unsuccessful since it was discontinued within a year, making it the most illusive of the Sonnet designs. 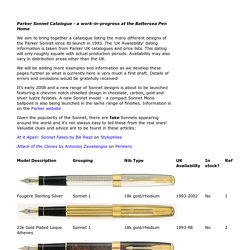 The 'UK Availability' dating information is taken from Parker UK catalogues and price lists. This dating will only roughly equate with actual production periods. Pelikan Pens Guide. Below you will find ‘Quick Links’ to a detailed accounting of all of the known variations of the Pelikan M75, M1xx, M2xx, M3xx, and M6xx families of fountain pens including the M481 and M101N. 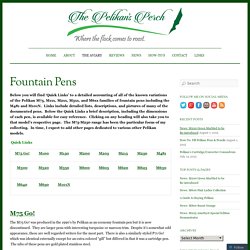 Links include detailed lists, descriptions, and pictures of many of the documented pens. Below the Quick Links a brief description, including the dimensions of each pen, is available for easy reference. Clicking on any heading will also take you to that model’s respective page. The M75-M250 range has been the particular focus of my collecting. In time, I expect to add other pages dedicated to various other Pelikan models. Quick Links. Pilot Vanishing Point Fountain Pens. Pilot Namiki Vanishing Point Capless Fountain Pen History Page. (May 22, 2009) Just got 3 prototype Vanishing Points: two lightish reds and one lightish blue. 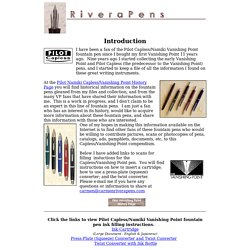 The three pens with the tags on the pocket clip in the picture below are the regular production, released in the U.S., pens. The red pen with no tag and the two with round stickers are the prototypes. I was told that the stickered VPs are trimmed with chrome rather than rhodium. Looking at them I can't tell the difference. All three of the prototypes have 14K gold nibs dated 1998 or 1999. (February 1, 2009) I have added four new beauties to the Pilot Namiki Capless/Vanishing Point fountain pen history page. Sheaffer Pens. Sheaffer was one of the iconic American pen companies, founded and long headquartered in Fort Madison, Iowa. 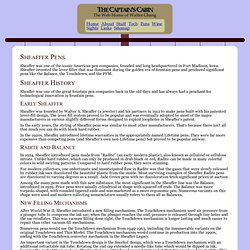 Hello fellow FPNers, I am taking the excuse of perfect natural light conditions to write a short overview of S.T. 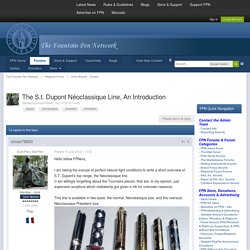 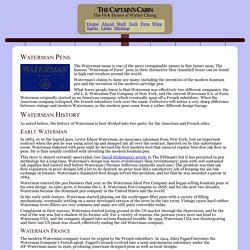 The famous "Waterman of Paris" pens in their distinctive blue clamshell boxes can be found in high end retailers around the world. Waterman's claims to fame are many, including the invention of the modern fountain pen and the invention of the modern cartridge pen. What fewer people know is that Waterman was effectively two different companies: the old L. Modern Waterman Pens - The 2000s. Here are some notes about modern Waterman pens produced through the 2000s and beyond. 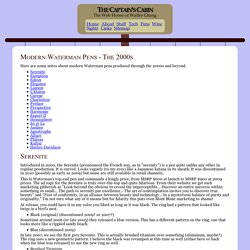 Introduced in 2000, the Serenite (pronounced the French way, as in "serenity") is a pen quite unlike any other in regular production. It is curved. Looks vaguely (to my eyes) like a Japanese katana in its sheath. It was discontinued in 2010 (possibly as early as 2009) but some are still available in retail channels. This is Waterman's top-end pen and commands a kingly price, from MSRP $600 at launch to MSRP $900 at 2009 prices.

At release, you could have it in any color you liked as long as it was black. Black (original) (discontinued 2009? Sometime around 2006 (or late 2005) they released a blue version. Blue (discontinued 2009) Waterman Carene Colors. Much of the problem is under what lighting conditions the pen was photographed. 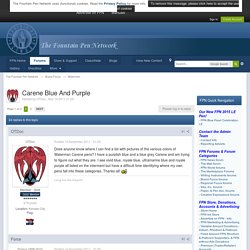