Cinema & Television & Video. Podcasts. Greatest comebacks in sporting history. Food. Cool & Interesting activities. Blogs. 21 life-saving facts that everyone should know. Shutterstock Just about everyone knows that you should never text and drive, and that you should stop, drop, and roll if you catch on fire. 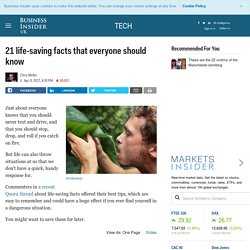 But life can also throw situations at us that we don't have a quick, handy response for. Commenters in a recent Quora thread about life-saving facts offered their best tips, which are easy to remember and could have a huge effect if you ever find yourself in a dangerous situation. You might want to save these for later. Your brain can't handle walking and using your phone at the same time — so look up. Murali Krishnan says walking and using your phone both demand large amounts of cognitive effort. As a result, you can't fully focus on both at the same time in the same way you can with walking and gum-chewing, for instance. Eliminate your car's blind spots by adjusting your mirrors properly.

Reuters/Olivia Harris Blind spots aren't inevitable in all vehicles, says Kristen Rush. Heat transfers faster through liquid than gas, so keep warm by staying dry. 1. 2. How to Fix My Lava Lamp. The wax “lava” in lava lamps flows upward and back down because the wax and the water solution is closely balanced in density and buoyancy. 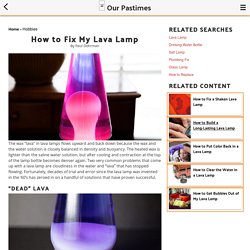 The heated wax is lighter than the saline water solution, but after cooling and contraction at the top of the lamp bottle becomes denser again. Two very common problems that come up with a lava lamp are cloudiness in the water and “lava” that has stopped flowing. Fortunately, decades of trial and error since the lava lamp was invented in the ‘60’s has zeroed in on a handful of solutions that have proven successful. “Dead” Lava Decide whether the lava lies flat or is shaped like a dome. Replace the bulb with the same wattage, if you find the bulb is defective. Assess the lamp’s surrounding, which could be the source of the trouble.

Run the lamp for four hours to heat it up fully. Cloudy Water Unplug the lamp and let it cool for two hours. Fill the lamp with distilled water, but don’t swirl it around or shake it. 'Team Human' and the resistance. FORESIGHT. How The Great British Baking Show helps me cope with Trump. A month ago, I fell into a deep Trump-induced depression. 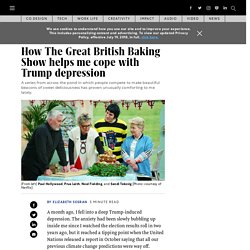 The anxiety had been slowly bubbling up inside me since I watched the election results roll in two years ago, but it reached a tipping point when the United Nations released a report in October saying that all our previous climate change predictions were way off. A team of 91 scientists from 40 countries believe that we’re headed to a full-on crisis by as early as 2040.

For context, my toddler will just be completing college then. Rather than focusing on her career, she will be facing a world full of food shortages, entire countries that are underwater, and the mass death of coral reefs. Trump’s reaction was typical. In the face of so many other crises–mass shootings, hate crimes, kids in cages–I did the most logical thing I could think of: I crawled back to bed and binge-watched The Great British Baking Show. I’m lucky. The Great British Baking Show celebrates an entirely different philosophy. Youtube.