"We are less bored than our ancestors were, but we are more afraid of boredom. We have come to know, or rather to believe, that boredom is not part of the natural lot of man, but can be avoided by a sufficiently vigorous pursuit of excitement.

" Bertrand Russell. How boredom can lead to your most brilliant ideas [ TED Talk : Manoush Zomorodi ] Fighting Boredom? While we may complain about having too much stress, we often fail to consider that the flipside is something universal to us all: boredom. 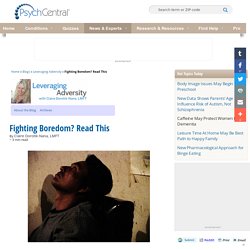 And too much boredom — or too little stress — comes with it’s own negative consequences. Psychological scientist John Eastwood of York University (Ontario, Canada) and colleagues at the University of Guelph and the University of Waterloo define boredom as “an aversive state of wanting, but being unable, to engage in satisfying activity,” which arises from failures in one of the brain’s attention networks. Eastwood expands on the definition of boredom to include three specific factors: While we may consider boredom an unpleasant state, and whether we attribute it to the environment or not, what we often fail to consider is just why it happens. On a fundamental level, “not having anything to do” is the same as “not needing to do anything.” Psychologists recommend children be bored in the summer.

Do you entertain your kids with chess camp, art school, cooking classes, or tennis lessons during the unstructured summer months? 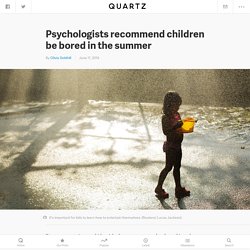 Or perhaps all of them? There are activities and summer camps galore to fill children’s time and supply much needed childcare when kids are out of school. But psychologists and child development experts suggest that over-scheduling children during the summer is unnecessary and could ultimately keep kids from from discovering what truly interests them. “Your role as a parent is to prepare children to take their place in society. Kierkegaard on Boredom, Why Cat Listicles Fail to Answer the Soul’s Cry, and the Only True Cure for Existential Emptiness. By Maria Popova “The more a person limits himself, the more resourceful he becomes.” 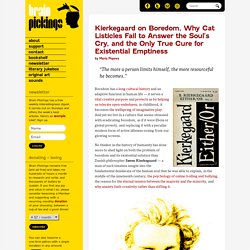 Boredom has a long cultural history and an adaptive function in human life — it serves a vital creative purpose and protects us by helping us tolerate open-endedness; in childhood, it becomes the wellspring of imaginative play. And yet we live in a culture that seems obsessed with eradicating boredom, as if it were Ebola or global poverty, and replacing it with a peculiar modern form of active idleness oozing from our glowing screens. Boredom Can Be Dangerous for Mental Illness.

While I always recommend making time for relaxation, there’s one facet to having time on your hands that I must caution about. 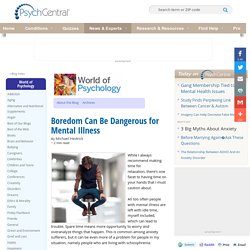 All too often people with mental illness are left with idle time, myself included, which can lead to trouble. Spare time means more opportunity to worry and overanalyze things that happen. Bertrand Russell on the Vital Role of Boredom and “Fruitful Monotony” in the Conquest of Happiness. Between the time Kierkegaard contemplated boredom and psychoanalyst Adam Phillips made his bewitching case for why the capacity for it is essential for a full life, Bertrand Russell (May 18, 1872–February 2, 1970) tussled with the subject more elegantly than any other thinker before or since. 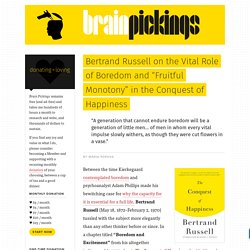 Waiting Time. Lack of Focus. Doing Nothing. Anguish. Loneliness. Negative Feelings. How to trick your brain into not getting bored. “Our brains are not wired for routine and repetition at work,” he says. 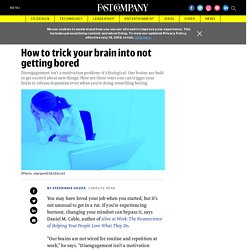 “Disengagement isn’t a motivation problem; it’s a biological one.” Cable was a professor at the University of North Carolina when he says he lost his zest for his own job and slowly descended into boredom. After being diagnosed and treated for Hodgkin lymphoma, his perspective changed, and he found a sense of gratitude for his job. He stumbled on research about the part of the brain called the ventral striatum, also called the “seeking system,” and its role in being your best self.

“This part of our brain urges us from the time we’re babies to explore what we don’t know,” he says. When we succumb to these urges, our brain delivers dopamine to reward us and that makes us feel more alive, and the same thing can happen at work, says Cable, currently a professor of organizational behavior at London Business School. How to Beat Boredom. Imagination.