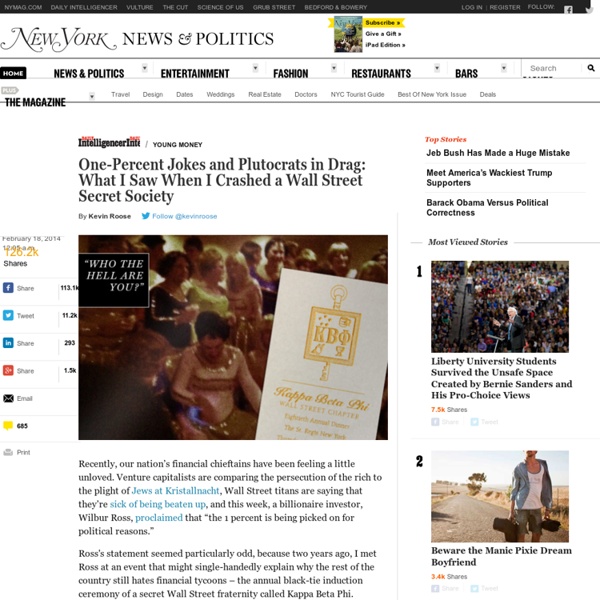 Recently, our nation’s financial chieftains have been feeling a little unloved. Venture capitalists are comparing the persecution of the rich to the plight of Jews at Kristallnacht, Wall Street titans are saying that they’re sick of being beaten up, and this week, a billionaire investor, Wilbur Ross, proclaimed that “the 1 percent is being picked on for political reasons.” Ross's statement seemed particularly odd, because two years ago, I met Ross at an event that might single-handedly explain why the rest of the country still hates financial tycoons – the annual black-tie induction ceremony of a secret Wall Street fraternity called Kappa Beta Phi. “Good evening, Exalted High Council, former Grand Swipes, Grand Swipes-in-waiting, fellow Wall Street Kappas, Kappas from the Spring Street and Montgomery Street chapters, and worthless neophytes!” On cue, the financiers shouted out in a thundering bellow: “DUM VIVAMUS EDIMUS ET BIBERIMUS.” I wanted to break the streak for several reasons.

WND Fed’s Dirty Little Secret: “The Gold Isn’t There… Exists as Paper IOU’s” The Federal Reserve doesn’t have enough gold to pay Germany back Mac Slavo | SHTFPlan.com The assumption by global depositors who have entrusted their national savings with the Federal Reserve and US Government has always been that when they request to repatriate their holdings the Fed would simply open the vault, access said assets and ship them back to where they belong. That’s exactly what Germany expected would happen last year when the country requested that the Federal Reserve return about one-fifth of their gold reserves. The response to Germany’s request turned heads all over the world and raised concerns that the Federal Reserve had squandered its gold holdings. The implications are earth shattering and hit the very core of the problems facing America today. In this must-watch interview with Future Money Trends, Jefferson Financial CEO Brien Lunden weighs in on Germany’s gold, what is happening at the Fed and what other central banks are doing right now.

The GNU Privacy Guard Crime Doesn't Pay? JPMorgan Chase Begs to Differ Source: Common Dreams JP Morgan CEO Jamie Dimon.(image by (Photograph: Karen Bleier / AFP / Getty Images)) What do you give a Wall Street CEO who has presided over a decade of fraud and criminality, who directly supervised a unit which lost $6 billion through incompetent and illegal trading, and whose reign of crime and mismanagement has cost his institution $20 billion in the last year alone -- a figure which undoubtedly would've been much larger in a less morally compromised regulatory environment? If you are the Board of Directors of JPMorgan Chase, you give him a raise. Let's not mince words: Jamie Dimon's bank is, as we said last May, the scandal of our time. The Captain and Tennile are getting divorced. It's true that Dimon is no longer publicly described as "the President's favorite banker," presumably as a result of these scandals. Regulator William K. Stock prices are based on expectation. Fraud isn't the sum total of JPMorgan Chase's business plan. Unfair? Well, of course.

Matrix - Who is Edward Snowden? (NaturalNews) This article is a compilation of a number of pieces I've written about Ed Snowden and the NSA. It doesn't replace them, but it hits the high points... Let's begin here: If you absolutely must have a hero, watch Superman movies. If your need for a hero is so great, so cloying, so heavy, so juicy that it swamps your curiosity, don't read this. If you can't separate Snowden's minor revelations from the question of who he is, if you can't entertain the notion that covert ops and intelligence-agency games are reeking with cover stories, false trails, and limited hangouts, you need more fun in your life. NSA? Okay. Is the Pope Catholic? In 2003, at age 19, without a high school diploma, Snowden enlists in the Army. Snowden breaks both legs in an exercise. If he was accepted in the Special Forces training program because he had special computer skills, then why discharge him simply because he broke both legs? Snowden shifts jobs. In 2007, Snowden is sent to Geneva. "Let's see. No.

Retiring Obama Administration Prosecutor Says the SEC Is Corrupt; Prior Reports Indicate Administration's Corruption (image by US Govt) Bloomberg News reported, on April 8th, that a Securities and Exchange Commission prosecuting attorney, James Kidney, said at his recent retirement party on March 27th, that his prosecutions of Goldman Sachs and other mega-banks had been squelched by top people at the agency, because they "were more focused on getting high-paying jobs after their government service than on bringing difficult cases." He suggested that SEC officials knew that Wall Street would likely hire them after the SEC at much bigger pay than their government remuneration was, so long as the SEC wouldn't prosecute those megabank executives on any criminal charges for helping to cause the mortgage-backed securities scams and resulting 2008 economic crash. His "remarks drew applause from the crowd of about 70 people," according to the Bloomberg report. Kidney's speech said that his superiors did not "believe in afflicting the comfortable and powerful." President Obama personally led in this lying.

Support Call of Duty: Black Ops II PC Updates The following is a list of new features, fixes, and issues that have been addressed in the latest Title Update to Call of Duty: Black Ops II: Multiplayer Issues Addressed Addressed an issue where Players were able to copy other Players’ emblems. Fixed an issue where throwing down and picking up equipment (such as the Bouncing Betty) for a long period of time would cause those items to become invisible when thrown. Players are no longer able to stand on invisible collision near the crane in Uplink. Zombies Issues Addressed TranZit Zombies no longer jitter when they climb on the roof of the bus or when they enter from the windows. Die Rise Leapers no longer become stuck in the main elevator shaft. Buried The Double Points upgrade now applies when purchasing ammunition for wall-buy weapons.

Stark Infographic of Too-Big-to-Fail Banks Represents 1% Consolidation in America The four banks listed in the infographic below – CitiGroup, Bank of America, JPMorgan Chase, and Wells Fargo – have received nearly $93 billion in taxpayer funds ($92,849,517,353 to be exact) since the bailouts began in 2008. While they make up a small percentage of the 940 bailout recipients which have, to date, received $611 billion dollars from American taxpayers, they represent a significant chunk of those funds. More importantly, their acquisition trajectories represent the consolidation of major banking institutions in America which have made them "too-big-to-fail," or so we've been told. Click on the infographic above to enlarge. The graphic above is not a statistical representation, as it does not display the relative sizes of those banks acquired, nor does it indicate which banks disappeared as a result of forced acquisitions. In 2013, Eric Holder admitted that global financial institutions in the U.S. and abroad have become so large as to be above the law.

The Day We Fight Back - February 11th 2014 Obama: 'I Don't Care About the Public's Welfare' | Eric Zuesse No, he didn't say it; no politician does; instead, he proves it, by both what he does and what he says (as will be shown here). Of course, there's pretense in at least some of what all successful politicians say, because success in politics requires at least some degree of pretense. No matter how good a person is, pretense is necessary for success in politics; that's just reality. We live with it; we deal with it, if we are at all realistic. A politician shows his values, and makes clear his priorities, not by what he says, but instead by what he actually does. For example, President Obama's 24 January 2012 State of the Union Address said: "Tonight, I'm asking my Attorney General to create a special unit of federal prosecutors and leading state attorneys general to expand our investigations into the abusive lending and packaging of risky mortgages that led to the housing crisis. But, two years later, the Inspector General of the U.S. He had lied to the public, all along.

I originally found this story here: by s243a Oct 29