On Quotes and Quoting

Remixology - bookforum.com / syllabi. Nov 29 2011 Judy Lillibridge You're a rare writer if you don't occasionally suspect yourself of plagiarism, of unconsciously stealing phrases from your favorite author or appropriating plot points from books you've read as a child. 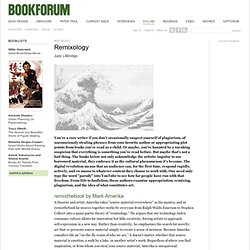 Or maybe, you're haunted by a sneaking suspicion that everything is something you've read before. But maybe that's not a bad thing. The books below not only acknowledge the artistic impulse to use borrowed material, they embrace it as the cultural phenomenon it's become. Remixthebook by Mark Amerika. Mark Twain on Plagiarism and Originality: “All Ideas Are Second-Hand” ALLERGY TO ORIGINALITY. Quentin Rowan, a.k.a. Q. R. Markham, Plagiarism Addict. Spy novels embrace clichés—the double agent, the bomb-rigged briefcase—and “Assassin of Secrets,” published last fall, made a virtue of this tendency, piling one trope onto another to create a story that rang with wry knowingness. 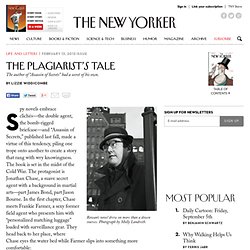 The book is set in the midst of the Cold War. The protagonist is Jonathan Chase, a suave secret agent with a background in martial arts—part James Bond, part Jason Bourne. In the first chapter, Chase meets Frankie Farmer, a sexy former field agent who presents him with “personalized matching luggage” loaded with surveillance gear. They head back to her place, where Chase eyes the water bed while Farmer slips into something more comfortable: Then he saw her . . . a small light dim but growing to illuminate her as she stood naked but for a thin, translucent nightdress; her hair undone and falling to her waist—hair and the thin material moving and blowing as though caught in a silent zephyr.

The inquiry quickly turned to the writer. Q. PURLOINED LETTERS. Are we too quick to denounce plagiarism? 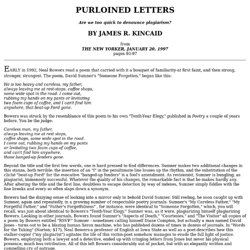 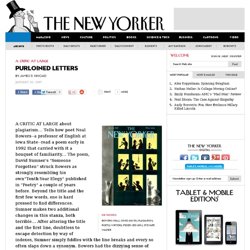 Tells how poet Neal Bowers--a professor of English at Iowa State--read a poem early in 1992 that carried with it a bouquet of familiarity... The poem, David Sumner's "Someone Forgotten" struck Bowers as strongly resembling his own"Tenth-Year Elegy" published in "Poetry" a couple of years before. Beyond the title and the first few words, one is hard pressed to find differences. Sumner makes two additional changes in this stanza, both terrible... After altering the title and the first line, doubtless to escape detection by way of indexes, Sumner simply fiddles with the line breaks and every so often slaps down a synonym.

Postcard from Hollywood: Copy Cats. The Ecstasy of Influence. All mankind is of one author, and is one volume; when one man dies, one chapter is not torn out of the book, but translated into a better language; and every chapter must be so translated. . . . 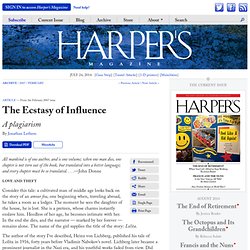 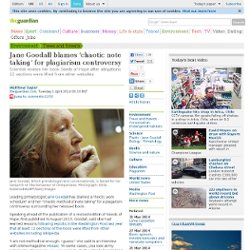 Photograph: Attila Kisbenedek/AFP/Getty Images Leading primatologist Jane Goodall has blamed a "hectic work schedule" and her "chaotic method of note taking" for a plagarism controversy surrounding her reissued book. Speaking ahead of the publication of a revised edition of Seeds of Hope, first published in August 2013, Goodall, said she had learned lessons following reports in the Washington Post last year that at least 12 sections of the book were lifted from other websites including Wikipedia. "I am not methodical enough, I guess," she said in an interview with online magazine Mosaic.

Plagiarism: Maybe It's Not So Bad. Who Really Said That? - The Chronicle Review. By Corey Robin Sometime last semester I was complaining to my wife, Laura, about a squabble in my department. 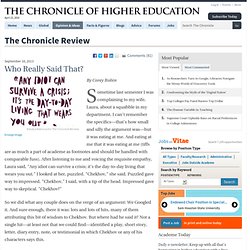 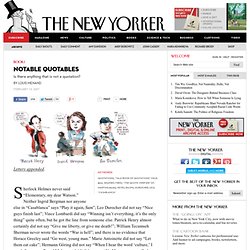 Sherlock Holmes never said “Elementary, my dear Watson.” Neither Ingrid Bergman nor anyone else in “Casablanca” says “Play it again, Sam”; Leo Durocher did not say “Nice guys finish last”; Vince Lombardi did say “Winning isn’t everything, it’s the only thing” quite often, but he got the line from someone else. Patrick Henry almost certainly did not say “Give me liberty, or give me death!”

; William Tecumseh Sherman never wrote the words “War is hell”; and there is no evidence that Horace Greeley said “Go west, young man.” Marie Antoinette did not say “Let them eat cake”; Hermann Göring did not say “When I hear the word ‘culture,’ I reach for my gun”; and Muhammad Ali did not say “No Vietcong ever called me nigger.” So what? Anatomy of a Fake Quotation - Megan McArdle - National.

Yesterday, I saw a quote from Martin Luther King Jr. fly across my Twitter feed: "I mourn the loss of thousands of precious lives, but I will not rejoice in the death of one, not even an enemy. 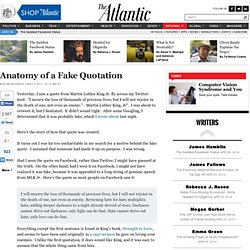 " - Martin Luther King, Jr". The Top Ten Greatest Misquotes in Literature. To be fair, it’s a lot easier misquoting someone speaking than it is someone writing. 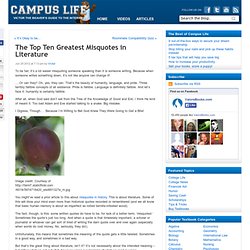 Because when someone writes something down, it’s not like anyone can change it! ….Or can they? Oh, yes, they can. That’s the beauty of humanity, language, and pride. Three terribly fallible concepts of all existence. After all, when God said don’t eat from the Tree of the Knowledge of Good and Evil, I think He kind of meant it. I Digress, Though…. Image credit: Courtesy of. New Yorker's Jonah Lehrer quits over fake Dylan quotes. 31 July 2012Last updated at 01:21 GMT Jonah Lehrer was a rising star at the New Yorker, focusing on science reporting A staff writer for the New Yorker has resigned after he admitted inventing quotes by Bob Dylan in a recent book. Jonah Lehrer, 31, acknowledged in a statement from his book publisher that some quotes he used did "not exist", and others were misquoted. The resignation came after the online magazine Tablet wrote an in-depth piece on the quotations used in Imagine: How Creativity Works.

Shipments of the book, which was published in March, have been halted. More unquotations from the New Yorker. « previous post | next post » Janet Malcolm and Jonah Lehrer are not the only New Yorker writers who have been accused of fabricating quotations. A more recent case involves a piece by Jared Diamond, "Annals of Anthropology: Vengeance is Ours", 4/21/2008 (abstract on the New Yorker's web site here). Diamond's article led to a long series of negative responses at iMediaEthics and Savage Minds, as well as a $10M libel suit (which as far as I can tell is still pending).

For a simple, clear and (I think) fair account of the facts and issues in the Diamond case, see Michael Balter, "'Vengeance' Bites back At Jared Diamond", Science 5/15/2009. Jonah Lehrer Wasn’t the Only Journalist Shaping His Conclusions. We are all bad apples,” wrote Jonah Lehrer, in probably the last back-cover endorsement of his career. “Dishonesty is everywhere … It’s an uncomfortable message, but the implications are huge.” Lehrer’s blurb was for behavioral economist Dan Ariely’s The (Honest) Truth About Dishonesty: How We Lie to Everyone—Especially Ourselves. Jonah Lehrer Resigns From The New Yorker After Making Up Dylan Quotes for His Book.

Nina SubinJonah Lehrer A publishing industry that is notoriously ill-equipped to root out fraud. A magazine whose famed fact-checking department is geared toward print, not the Web. The Many Shades of Plagiarism. You are a member of the sex class and the only way out is feminist revolt, by Jonah Lehrer. Plagiarism pinioned : Nature. Findings - Popular.