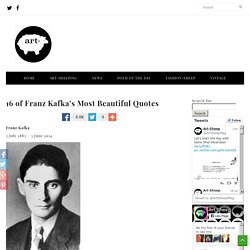 The writer found his father to be domineering and unsupportive of his artistic endeavours.Kafka never married, but was engaged on three different occasions to two different women. 25 Of Jane Austen’s Most Famous Quotes « Art-Sheep. Holly Williams for Art-Sheep Characterized by some as one of the masters of social commentary, English novelist Jane Austen (1775-1817) is known for her biting criticism on her era’s conventions in classic novels, such as Pride & Prejudice, Emma, Persuasion and Sense & Sensibility. The following quotes are some of our favorite by her. 1. “There is no charm equal to tenderness of heart.” 10 Quotes From a Oglala Lakota Chief That Will Make You Question Everything About Our Society. Luther Standing Bear was an Oglala Lakota Sioux Chief who, among a few rare others such as Charles Eastman, Black Elk and Gertrude Bonnin occupied the rift between the way of life of the Indigenous people of the Great Plains before, and during, the arrival and subsequent spread of the European pioneers. Raised in the traditions of his people until the age of eleven, he was then educated at the Carlisle Indian Industrial Boarding School of Pennsylvania, where he learned the english language and way of life. (Though a National Historical Landmark, Carlisle remains a place of controversy in Native circles.) Like his above mentioned contemporaries, however, his native roots were deep, leaving him in the unique position of being a conduit between cultures. Though his movement through the white man’s world was not without “success” — he had numerous movie roles in Hollywood — his enduring legacy was the protection of the way of life of his people. 9) …the old Lakota was wise. 30+ Beautiful and Inspirational Quotes by Frida Kahlo « Art-Sheep. 1. 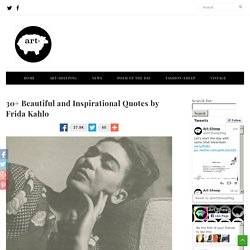 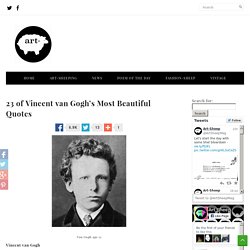 Interesting facts: Van Gogh only sold one painting during his lifetimeIt is known that he cut off his own ear, but two German historians claim that painter Vincent van Gogh lost his ear in a fight with his friend, the French artist Paul Gauguin.There were no confirmed photographs portraying Van Gogh as an adult, until a recently discovered group photo that features the artist along with other famous painters and writers. 1887 melanotype showing Emile Bernard (second from the left), Vincent van Gogh (third from the left), André Antoine (standing at center), and Paul Gauguin (far right) in a group photo Our 23 favorite Van Gogh quotes:

30DrSeuss_quotes.jpg (JPEG Image, 620 × 1900 pixels) - Scaled (52%) 25 lessons from Charles Bukowski. I Heart Intelligence 30 Quotes from Chuck Palahniuk that will Open Your Mind. Before Fight Club was a mainstream movie success, it was an amazing, life-changing, awe-inspiring book. Discovering the true identity of Tyler Durden was one of those moments that I rember exactly where I was, just like I remember exactly where I was on September 11th, 2001. Fight Club was only an dip into the twisted, swirling pool that is a Palahniuk novel for me and if you are a reader, I recommend reading Invisible Monsters, Survivor, and Choke. These are 30 of my favorite quips and quotes from those books, and I hope that they open your mind as much as they have opened mine.

“The unreal is more powerful than the real, because nothing is as perfect as you can imagine it.” “It’s only after we’ve lost everything that we’re free to do anything.” “People don’t want their lives fixed.