Guns in the USA 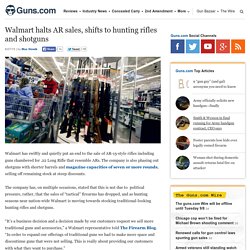 The company is also phasing out shotguns with shorter barrels and magazine capacities of seven or more rounds, selling off remaining stock at steep discounts. The company has, on multiple occasions, stated that this is not due to political pressure, rather, that the sales of “tactical” firearms has dropped, and as hunting seasons near nation-wide Walmart is moving towards stocking traditional-looking hunting rifles and shotguns. “It’s a business decision and a decision made by our customers request we sell more traditional guns and accessories,” a Walmart representative told The Firearm Blog. “In order to expand our offerings of traditional guns we had to make more space and discontinue guns that were not selling.

This is really about providing our customers with what they want to purchase.” Earlier this year U.S. Firearms in the USA. Cartoon: Aurora Shooting "American cartoonists have been quick to respond to the terrible massacre at a screening of the new Batman movie in Aurora, Colorado. 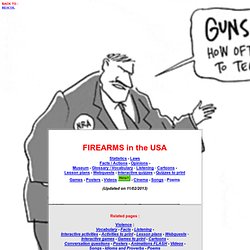 This one by Milt Priggee, a freelance editorial c artoonist from northwest Washington State, lays the blame squarely on the NRA (National Rifle Association), the American gun lobby organization... " The gun ownership and gun homicides murder map of the world. By the numbers: Guns in America. There were 310 million nonmilitary firearms in the United States as of 2009, according to federal figures. 60% -- Americans who supported a handgun ban in 195925% -- Americans who supported a handgun ban in 201320,947,258 - FBI firearm background checks in 2013 (CNN) -- Following the mass shootings in a Colorado movie theater and an elementary school in Connecticut, the debate over gun control has been reignited: How should the country balance its constitutional right to bear arms with access to deadly firepower? 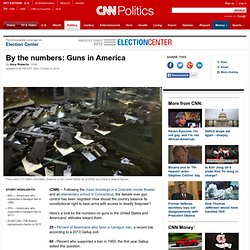 Here's a look by the numbers on guns in the United States and Americans' attitudes toward them. 25 - Percent of Americans who favor a handgun ban, a record low, according to a 2013 Gallup poll. 60 - Percent who supported a ban in 1960, the first year Gallup asked this question. What makes America’s gun culture totally unique in the world, in four charts. By Max Fisher December 15, 2012 The deadly shooting at Sandy Hook Elementary is provoking another heated round of the same conversation that the U.S. has after every mass shooting: is there something particular or unusual to our gun culture? 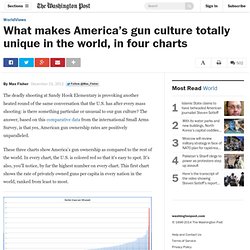 The answer, based on this comparative data from the international Small Arms Survey, is that yes, American gun ownership rates are positively unparalleled. These three charts show America's gun ownership as compared to the rest of the world. In every chart, the U.S. is colored red so that it's easy to spot. It's also, you'll notice, by far the highest number on every chart. Click to enlarge. Americans don't just have more guns that anyone else – 270 million privately held firearms. This next chart just shows the gun ownership per capita rate for the "developed" countries, or the members of the Organization for Economic Cooperation and Development (OECD).

Gun girls of America: Innocent faces. Pink rifles. After that horrific shooting by a 9-year-old, children in grip of a nation's troubling obsession  A US gun company sells 60,000 rifles a year for children between 4 and 10The Crickett firearm is sold in a 'My First Rifle' range of guns Belgian photographer An-Sofie Kesteleyn met some gun owners aged from 6The girls said they were scared of the devil, burglars, zombies and sharks By David Wilkes for the Daily Mail Published: 22:16 GMT, 28 August 2014 | Updated: 14:49 GMT, 29 August 2014 To match their skirts, flipflops and everything else in their doll-filled bedrooms, the girls have theirs in pink. 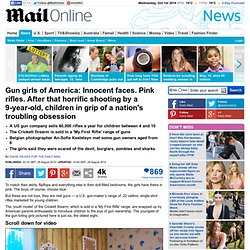 The boys, of course, choose blue. But these are not toys, they are real guns — a U.S. gun-maker’s range of .22 calibre, single-shot rifles marketed for young children. Virginia Statistics » Youth Violence Project » Curry School of Education. The highly publicized school shootings of the 1990s generated nationwide concern about school safety. 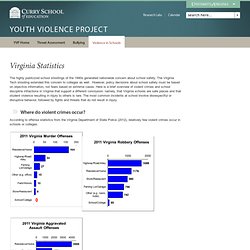 The Virginia Tech shooting extended this concern to colleges as well. However, policy decisions about school safety must be based on objective information, not fears based on extreme cases. Here is a brief overview of violent crimes and school discipline infractions in Virginia that support a different conclusion: namely, that Virginia schools are safe places and that student violence resulting in injury to others is rare. The most common incidents at school involve disrespectful or disruptive behavior, followed by fights and threats that do not result in injury. Where do violent crimes occur? According to offense statistics from the Virginia Department of State Police (2012), relatively few violent crimes occur in schools or colleges. Source: Virginia Department of State Police (2012) What are juveniles arrested for in Virginia?