A New Law to Reduce Deadly Police Shootings. The Supreme Court often gives American police officers broad leeway in determining when they can use lethal force in civil lawsuits, although states can set even higher legal standards in criminal cases. 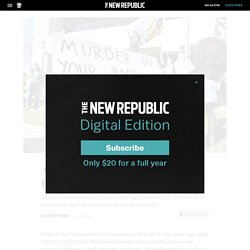 The high court first addressed the issue in Tennessee v. Garner in 1985. The case arose from the 1974 death of Edward Garner, a 15-year-old black teenager who allegedly broke into a Memphis home and stole a wallet containing $10. Shooting of Alton Sterling. On July 5, 2016, Alton Sterling, a 37-year-old black man, was shot dead at close range by two white Baton Rouge Police Department officers in Baton Rouge, Louisiana. 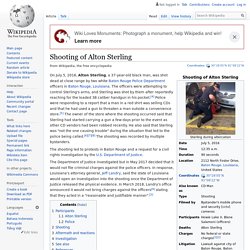 The officers were attempting to control Sterling's arms, and Sterling was shot by them after reportedly reaching for the loaded 38 caliber handgun in his pocket.[4] Police were responding to a report that a man in a red shirt was selling CDs and that he had used a gun to threaten a man outside a convenience store.[5] The owner of the store where the shooting occurred said that Sterling had started carrying a gun a few days prior to the event as other CD vendors had been robbed recently. He also said that Sterling was "not the one causing trouble" during the situation that led to the police being called.[6][7][8] The shooting was recorded by multiple bystanders. The shooting led to protests in Baton Rouge and a request for a civil rights investigation by the U.S. 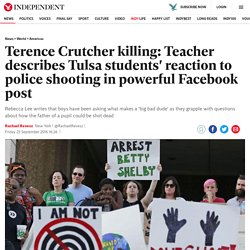 Rebecca Lee describes in a Facebook post how she has tried to help students come to terms with the death of Terence Crutcher by offering a chance to express their grief as well as ask questions. One question, asked by a teenage boy, cut to the centre of the issue: “What made him a ‘big bad dude’?” We’ll tell you what’s true. You can form your own view. From 15p €0.18 $0.18 USD 0.27 a day, more exclusives, analysis and extras. It was a question in the minds of many pupils, according to Ms Lee, who said they all came to the conclusion that Crutcher's skin colour was a decisive factor in his death. Ms Lee wrote on Facebook that she needed to “press pause”, read out an article of the police shooting to students and let them express their grief and ask questions. “'Was it his height? “They have grown inches since their first day in my class. Autumn Steele: ACLU appeals ruling denying access to police records. The ACLU of Iowa on Friday appealed a ruling that could limit the public's access to information about officer-involved shootings and other investigations. 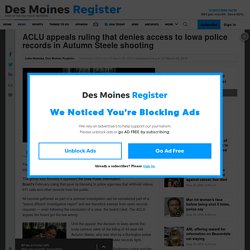 The group said Monday it appealed the Iowa Public Information Board's February ruling that gave its blessing to police agencies that withhold videos, 911 calls and other records from the public. All records gathered as part of a criminal investigation can be considered part of a "peace officers' investigative report" and are therefore exempt from open records requests — even following the conclusion of a case, the board ruled. The ACLU argues the board got the law wrong. Cops are almost never prosecuted and convicted for use of force. Police are very rarely prosecuted for shootings — and not just because the law allows them wide latitude to use force on the job. 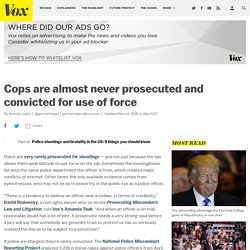 Seven Reasons Police Brutality Is Systemic, Not Anecdotal. Darrin Manning’s unprovoked “stop and frisk” encounter with the Philadelphia police left him hospitalized with a ruptured testicle. 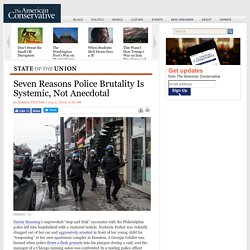 Neykeyia Parker was violently dragged out of her car and aggressively arrested in front of her young child for “trespassing” at her own apartment complex in Houston. Will Seeing Both Sides Of The Issue Help End Police Brutality? Federal officials say they won't pursue charges against former Oklahoma officer who fatally shot unarmed black man. Former Officer Betty Shelby shot and killed Terence Crutcher, 40. 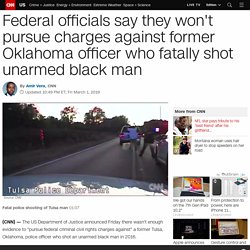 Shelby, who is white, said she fired out of fear when she killed Crutcher, who had his hands above his head. She was acquitted of manslaughter in May 2017 and resigned from the department in August 2017. The Justice Department said in a news release Friday "the federal review sought to determine whether Shelby violated federal law by willfully using unreasonable force against Crutcher. " Federal investigators ultimately determined there wasn't enough evidence to "prove beyond a reasonable doubt" that Shelby's use of force was "objectively unreasonable" under the Supreme Court definition. This means there's no evidence to show that Shelby violated Crutcher's constitutional rights with "deliberate and specific intent" to do something illegal. Cop Shoots Innocent Mother to Death in Front of Her Child, Opens Fire on Pet Dog — Receives Paid Leave With No Charges.

UPDATE — Body Cam Footage is Released The officer’s body cam captured the final moments before he tried to kill the family’s dog, but instead shot the mother to death. 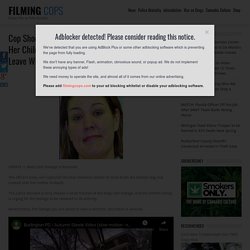 The police decided to only release a small fraction of the body cam footage, and the victim’s family is urging for the footage to be released in its entirety. Nevertheless, the footage you are about to view is extreme. Discretion is advised. Mapping Police Violence.