Curiosity Is as Important as Intelligence - Tomas Chamorro-Premuzic 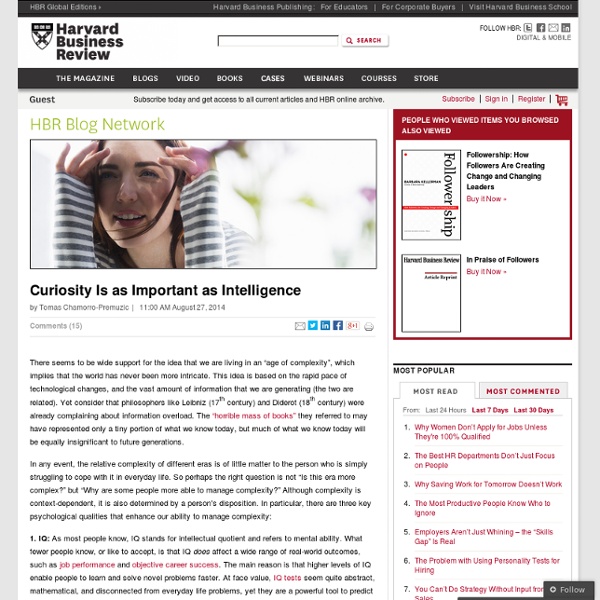 by Tomas Chamorro-Premuzic | 11:00 AM August 27, 2014 There seems to be wide support for the idea that we are living in an “age of complexity”, which implies that the world has never been more intricate. This idea is based on the rapid pace of technological changes, and the vast amount of information that we are generating (the two are related). Yet consider that philosophers like Leibniz (17th century) and Diderot (18th century) were already complaining about information overload. The “horrible mass of books” they referred to may have represented only a tiny portion of what we know today, but much of what we know today will be equally insignificant to future generations. In any event, the relative complexity of different eras is of little matter to the person who is simply struggling to cope with it in everyday life. 1. 2) EQ: EQ stands for emotional quotient and concerns our ability to perceive, control, and express emotions. Although IQ is hard to coach, EQ and CQ can be developed.

30 Questions to Ask Yourself Before You Die. {Via studioflowerpower on etsy} “Rather than money, than fame, than love…give me truth.” ~ Thoreau I woke up this morning and my life clock marked 30. I thought I was damaged. Then I learned I’m introverted. Not long ago, I discovered Michael Schiller’s terrific Social Introverts Facebook Fan Page. We started corresponding, and I’d love to share the note he sent me about his passion for helping introverts appreciate their own quiet perfection. ~ Susan Click image to "Like" Michael Schiller's "Social Introverts" FB Fan Page Hello, Susan.

The 8 Most Unexpected Advantages of Anxiety Anxiety can be crippling, but psychology studies find it does have some unexpected upsides. Anxiety can be crippling, but sometimes it is a crucial part of getting the best out of yourself. Artists, comedians, athletes and other performers often talk about the right amount of anxiety and how it can improve creativity and performance. But anxiety also has a number of lesser known upsides… 11 Amazing Thank You Notes From Famous People After a short stint in the New York theater world, comedienne Carol Burnett landed a job as a regular on The Garry Moore Show in 1959. She caught the attention of CBS executives, who offered her her own series in 1967. With her husband Joe Hamilton at the helm, Burnett broke new ground as the first female host of a TV variety show. The Carol Burnett Show ran for 11 seasons and earned a handful of Emmy Awards in the process.

Connecting the Dots Dec 6 2014 Connecting the Dots visual note by Nicki Hambleton using Adobe Ideas on iPad As a young child I loved Dot to Dots, joining the seemingly random patterns to reveal a recognisable image. I loved to try to work out what the dots were going to magically transform into by connecting them via advancing numbers. “Consciousness Creates Reality” – Physicists Admit The Universe Is Immaterial, Mental & Spiritual “Consciousness creates reality,” a statement that has gained a lot of attention across various alternative media outlets around the world. Make no mistake, consciousness has been (for quite some time) studied by numerous scientists, especially in its relation to quantum physics and how it might be correlated with the nature of our reality. What is consciousness? Consciousness includes a number of things.

4 Surprising Advantages of Being Depressed Why being depressed can sometimes be necessary, even beneficial. Depression can be an adaptive way of dealing with certain problems in life, such as relationship breakdown and illness, say the authors of a new study. While clinical depression is a serious mental health issue, the researchers argue that by examining how depression might have originally arisen, we can better understand how to treat it. Dr. Paul Andrews, who led the study, published in the journal PLOS ONE, said: “Depression has long been seen as nothing but a problem.We are asking whether it may actually be a natural adaptation that the brain uses to tackle certain problems.We are seeing more evidence that depression can be a necessary and beneficial adaptation to dealing with major, complex issues that defy easy understanding.”

The Anatomy Of A Thank You Note – Krrb’s Guide To Expressing Gratitude With Style ~ Krrb Blog First off, if you can get your hands on a kid who is just learning to write and then convince said kid to write (or make a good go at writing) "Thanks" on a piece of paper that you can put into an envelope and send, you are golden. Your job is done. Who is not going to be touched by a child's early attempts at writing? Nothing says thank you like a note written by a 4 year old.

Related:
Related:  Personal Development   -  mind fuck   -  Understanding Human Behavior   -  Oh the Humanity   -  'Oh, Rats!'   -  Oh! Henry!   -  Chomsky on the future of humanity   -  Value of the natural world on humanity   -  Texas, Oh Texas   -  Oh Dear, Things are not right   -  Oh Oh Blog - F/T   -  Homey Oh My - F   -  Cultural Studies & Analysis   -  Gut Bacteria Divide People Into 3 Types, Scientists Report   -  HUMAN RESOURCES Social Engineering In The 20th Century HQ FULL - YouTube   -  5 Creepy Forms of Mind Control You're Exposed to Daily | Cracked.com   -  Cognitive Behavioural Therapy (CBT) Worksheets, Handouts, Resources and Techniques | Psychology Tools   -  Staples eReader interactive infographic.   -  What is the Bystander Effect? Why Bystanders Fail to Intervene   -  12 Rules for Being a Human Being   -  The Cheapest Generation   -  GF2045 - Future Human Evolution Uses Advanced Technology to Achieve Immortality   -  How to confuse a moral compass : Nature News & Comment   -  The Science of Procrastination and How to Manage It, Animated | Brain Pickings   -  BQO | Big Questions Online   -  The Science of “Intuition” | Brain Pickings   -  Transhumanist Values   -  How To Design a Lucky Life   -  Do we live in a computer simulation? UW researchers say idea can be tested   -  What Are Your Values? - Decision-Making Skills from MindTools.com   -  PsyBlog’s 10 Most Popular Psychological Insights From 2012 — PsyBlog   -  How to Identify Your Passions   -  Why Focus Makes Us Smarter--and 8 Ways to Sharpen Yours | Big Think   -  A Scientific Guide to Saying "No": How to Avoid Temptation and Distraction - The Buffer Blog   -  Lawrence Lessig: We the People, and the Republic we must reclaim | Video on TED.com   -  Michel Bauwens: Four Scenarios for the Collaborative Economy - YouTube   -  Esoteric Agenda - Full Documentary - YouTube   -  Money on the Mind - YouTube   -  Take Two 'Normal' People, Add Money To Just One Of Them, And Watch What Happens Next   -  Ohoh Blog - DIY and crafts