Henry Kissinger on the Assembly of a New World Order - WSJ 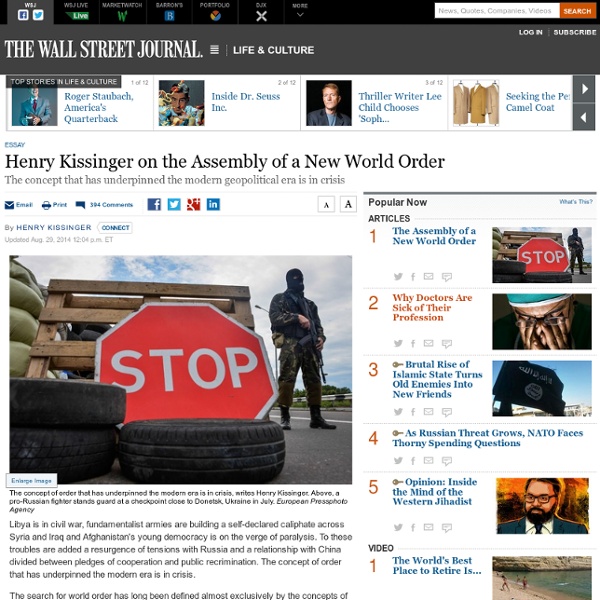 Henry Kissinger’s dark secret: Why the warmonger’s even worse than we thought Heinz Alfred Kissinger, the man better known as Henry who served as perhaps the chief architect of U.S. foreign policy from 1969 to 1977, is 91 years old. And although he is still fêted by some of the more obnoxious members of D.C.’s ruling elite, he is also widely acknowledged to be a man with enough skeletons in his closet to rival the Catacombs of Paris. Because he’s in his tenth decade of life and well removed of any real governmental power, one could argue that the best move at this point would be to leave Kissinger alone, let time and mortality to do their work and have history be the ultimate judge. That’s what the very serious people, Kissinger included, would want us to do. But I won’t. “Kissinger … had previously planned an underground effort to improve relations with Havana,” according to the Times, “[b]ut in late 1975, [Cuban dictator Fidel] Castro sent troops to Angola to help the newly independent nation fend off attacks from South Africa and right-wing guerrillas.”

Declassified Documents Show Henry Kissinger's Major Role in the 1974 Initiative That Created the Nuclear Suppliers Group Kissinger Favored Efforts to Curb Nuclear Proliferation in Concert with Other Powers, But Did Not Want U.S. to "Go Charging Around the World, Like Don Quixote" State Department Advisers Warned That New Nuclear-armed Nations or "Even Subnational Groups" Could "Threaten the United States with Nuclear Violence," Which Would Require "Extensive and Costly Restructuring" of the U.S. Defense Posture New Documents Disclose the Key Role of Non-NPT Signatory France in Making the NSG Possible But Also in Shaping Guidelines on Lowest Common Denominator Basis National Security Archive Electronic Briefing Book No. 467 Posted - April 21, 2014 For more information contact: William Burr - 202/994-7000 or nsarchiv@gwu.edu The Nuclear Suppliers Group has played a significant role in the history of the nonproliferation system since the 1970s, although the concerns raised by the French indicate why it was a controversial project very early on. Among the documents in today's publication: Sources: A: Richard M.

Exclusive: Yale tells students to keep Kissinger talk secret Yale graduate students were urged to respect the “confidentiality” of an upcoming lecture by controversial Ford/ Nixon Secretary of State Henry Kissinger, according to an email sent by an administrator and forwarded to Salon. “Dr. Kissinger’s visit to campus will not be publicized, so we appreciate your confidentiality with respect to this exciting opportunity,” states an all-bold paragraph sent by Larisa Satara, the associate director of Yale’s Jackson Institute for Global Affairs, to a private listserv for Yale history graduate students. Satara and Yale spokespeople did not immediately respond to a request for comment on the email. Kissinger, who served as national security advisor and secretary of state under Presidents Nixon and Ford, could present an appealing target for campus protest. Kissinger received the Nobel Peace Prize in 1973.

The Ivy League’s favorite war criminal: Why the atrocities of Henry Kissinger should be mandatory reading Ex-government officials have always occupied a particular sweet spot for members the Ivy League. Regardless of what one did while in power, regardless of how disreputable or immoral or even criminal one’s actions, the elite academy has been all too willing to embrace even the most dubious of former officials. So it was that last Friday night, Henry Kissinger spoke at Yale — to which he has donated an archive of personal documents, where he occasionally participates in a course with Cold War historian John Lewis Gaddis, and where he give an invite-only talk just a year ago. Last week’s “conversation” was moderated by Harvard Professor Niall Ferguson, who is also Henry Kissinger’s official biographer. At least members of the Yale community would be allowed to ask questions of Mr. So, in the interest of Lux et Veritas—“Light and Truth,” Yale’s official motto—a brief recapitulation of Kissinger’s record is in order: 1. Five days before the 1968 election, President Lyndon B. 2. 3. 4.

Henry Kissinger Telcons Released by Court Order on 1 August 2015 Washington, D.C., August 19, 2015 – President Gerald Ford was "offended" and Secretary of State Henry Kissinger "almost blind with rage" over Israeli negotiating behavior in 1975, according to newly released Kissinger telephone transcripts obtained through a Freedom of Information Act lawsuit and posted today by the National Security Archive. The 905 telcons released in full contain highest-level verbatim conversations between Kissinger and a wide range of officials and journalists about the evacuation of Saigon at the end of the Vietnam War, the crisis in Cyprus, Middle East negotiations, revelations of CIA misdeeds, Ronald Reagan's challenge to Ford in the 1976 primaries, and other topics, along with candid remarks never meant for public view about personalities ranging from Donald Rumsfeld to then CIA Director William Colby. About Colby's cooperation with Congressional investigations into the CIA, Kissinger commented, "You accuse him of a traffic violation, and he confesses murder."

Kissinger poisoned the Middle East: America is living in a quagmire of his making The only person Henry Kissinger flattered more than President Richard Nixon was Mohammad Reza Pahlavi, the Shah of Iran. In the early 1970s, the Shah, sitting atop an enormous reserve of increasingly expensive oil and a key figure in Nixon and Kissinger’s move into the Middle East, wanted to be dealt with as a serious person. He expected his country to be treated with the same respect Washington showed other key Cold War allies like West Germany and Great Britain. As Nixon’s national security adviser and, after 1973, secretary of state, Kissinger’s job was to pump up the Shah, to make him feel like he truly was the “king of kings.” Reading the diplomatic record, it’s hard not to imagine his weariness as he prepared for his sessions with the Shah, considering just what gestures and words would be needed to make it clear that his majesty truly mattered to Washington, that he was valued beyond compare. During another prep, Kissinger was told that “the Shah wants to ride in an F-14.”

They died for Henry Kissinger’s “credibility”: The real history of our Vietnam immorality Détente with the Soviet Union and the opening to China were significant breakthroughs in their own right. Indeed, a positive appraisal of the Nixon administration’s foreign policies is predicated on our viewing them this way. But Richard Nixon and Henry Kissinger did not view them in isolation at the time. Instead, both men believed that Moscow and Beijing, keen to extract economic and strategic benefits from an improved relationship with Washington, would apply pressure on Hanoi to agree to peace terms permitting a full American withdrawal. So when the United States withdrew from Vietnam in January 1973, when “peace” was finally achieved, it came at a horrendous cost. Kissinger’s best answer to Kerry’s question was “for the sake of credibility.” The commitment of 500,000 Americans has settled the issue of the importance of Viet Nam. Henry Kissinger’s plan for a staged withdrawal from Vietnam was thus sustained by the logic of keeping up appearances.

Henry Kissinger Jokes About Making a Pawn of Bobby Fischer Fischer and Spassky at the 1972 World Chess Championship. Kissinger’s call to Fischer motivated him to show up to the match. Chess was always an apt metaphor for the Cold War, and the significance of Bobby Fischer beating Soviet Boris Spassky in the 1972 World Chess Championship –ending 24 years of Soviet domination of the event, has been well documented. It has also been noted that Henry Kissinger got involved, urging the increasingly recalcitrant Fischer to play in the event. In the early 1970s Bobby Fischer was still the Golden Boy with the ability to beat the best minds the Soviets had to offer, though he was beginning to demonstrate more of what would become known as his trademark paranoia. The tournament was dramatic enough thanks to Fischer’s antics, but a July 3, 1972, telephone conversation capturing British journalist David Frost asking Kissinger to persuade the grandmaster to attend the championship adds more to the story. Like this: Like Loading...

Kissinger Instructs Palin On Finer Points Of Clandestine Carpet Bombing WASHINGTON—In preparation for her debate with Sen. Joe Biden next week, Republican vice presidential nominee Sarah Palin met with seasoned statesman and Nobel Peace Prize–winner Henry Kissinger yesterday to take advantage of his extensive foreign policy knowledge and expertise in carpet-bombing innocent civilians in nations with which the U.S. is not officially at war. "Dr. Kissinger has given Gov. Sources close to the campaign said that Palin's meeting with Vice President Cheney about how to claim executive supremacy for the purpose of bypassing constitutional limits on torture has been canceled since advisers feel she already has enough personal experience with the subject.

The Top 10 Most Inhuman Henry Kissinger Quotes Henry Kissinger's quote released by Wikileaks, "The illegal we do immediately; the unconstitutional takes a little longer," likely brought a smile to his legions of elite media, government, corporate and high society admirers. Oh that Henry! That rapier wit! That trademark insouciance! It is unlikely, however, that the descendants of his more than 6 million victims in Indochina, and Americans of conscience appalled by his murder of non-Americans, will share in the amusement. His illegal and unconstitutional actions had real-world consequences: the ruined lives of millions of Indochinese innocents in a new form of secret, automated U.S. executive warfare. Kissinger has a history of saying outrageous things that reveal a dark callousness and hostility to the lives of innocent civilians. Top 10 Kissinger Quotes 1. 2. 3. 4. 5. 6. 7. 8. 9. 10. Fred Branfman, who died in 2014, was published in the New York Times, the Washington Post, Harper’s, and many other publications.

The Myth of Henry Kissinger In 1952, at the age of twenty-eight, Henry Kissinger did what enterprising graduate students do when they want to hedge their academic future: he started a magazine. He picked an imposing name—Confluence—and enlisted illustrious contributors: Hannah Arendt, Raymond Aron, Lillian Smith, Arthur Schlesinger, Jr., Reinhold Niebuhr. The publisher James Laughlin, who was a backer of the magazine, described the young Kissinger as “a thoroughly sincere person (terribly earnest Germanic type) who is trying his hardest to do an idealistic job.” For Cold War liberals, who saw the stirrings of fascism in everything from McCarthyism to the rise of mass culture, Weimar was a cautionary tale, conferring a certain authority on those who had survived. For more than sixty years, Henry Kissinger’s name has been synonymous with the foreign-policy doctrine called “realism.” But Kissinger, now approaching his ninety-seventh birthday, no longer inspires such widespread loathing.

Welcome Back to Kissinger’s World You can hate Henry Kissinger and think him evil. What you can’t do is ignore him—especially now. So argues Barry Gewen in his incisive new intellectual history of Kissinger and his times, The Inevitability of Tragedy. Indeed, not only can we not ignore the old statesman, who turned 97 in May, but we need him more than ever. The world, from Washington’s perspective especially, has gotten Kissingerian again. The Inevitability of Tragedy: Henry Kissinger and His World, Barry Gewen, W.W. The coronavirus crisis has accelerated Trump’s agenda, inspiring a new wave of “America First” isolationism, as his trade representative, Robert Lighthizer, argued in a recent essay calling for a reversal of U.S. economic offshoring in response to China’s “predatory trade and economic policies” and deceptions over the origins of the pandemic. The United States is not ready for any of this. U.S. The answer to the future of U.S. Indeed, it has become far worse than that. The key is not to overreact. U.S.