The 9 Best Books for Meaningful Change 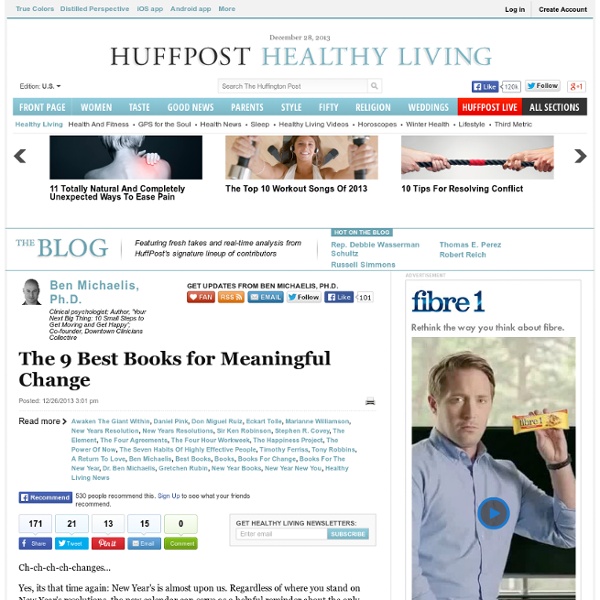 Ch-ch-ch-ch-changes... Yes, its that time again: New Year's is almost upon us. Regardless of where you stand on New Year's resolutions, the new calendar can serve as a helpful reminder about the only true constant in all of our lives: change. Like it or not, we are all always changing and adapting to circumstances as time rolls on. The positive thing about change is that with some effort we can help direct some (though not all) of the change in our lives as opposed to being victimized by it. This is not just a sound bite. Although change comes from inside, it doesn't mean you can't use a little help from the outside. With that, I give you my list of The 9 Best Books For Meaningful Change: 9. This book was mentioned in a session by one of my financially successful patients who told me that reading it helped him to become an entrepreneur. 8. Rubin's breakthrough book from 2011 is enlightening, personal, poignant, funny, and wise. 7. 6. One of the first and still one of the best. 5. 4. 3. 2.

FP’s Favorite Reads of 2013 Before we dive into next year's list of conflicts to watch, some thoughts on the year we are about to conclude are in order. In short, 2013 was not a good year for our collective ability to prevent or end conflict. For sure, there were bright moments. Colombia appears closer than ever to ending a civil war which next year will mark its 60th birthday. Myanmar, too, could bring down the curtain on its decades-long internal ethnic conflicts, though many hurdles remain. The deal struck over Iran's nuclear program was a welcome fillip for diplomacy, even dynamism.

These 20 Photographs Will Leave You Speechless. Especially The 11th One. There Are No Words. Take a look at these 20 powerful photos that will leave you speechless. Some of these photos are of truly historic moments, while others, are quite heartbreaking. World War II veteran from Belarus Konstantin Pronin, 86, sits on a bench as he waits for his comrades at Gorky park during Victory Day in Moscow, Russia, on Monday, May 9, 2011. Konstantin comes to this place every year. This year he was the only person from the unit to show. Reddit100s of galaxies seen through the Hubble Deep Field (HDF), as they were 10 billion years ago.

America's Best Hate-Reads, 2013 The year is almost over. Thank God. If you're anything like us, you spent a good portion of the last year tearing your hair out over something you read on the internet. (Did you know millennials have a sense of entitlement? It's true!) Here are 46 stories we couldn't stop complaining about in 2013: Young Readers & Young Adults - Suggested Readings - Resources - Native Voices Alexie, Sherman (Spokane/Coeur d’Alene). The Absolutely True Diary of a Part-Time Indian. New York: Little, Brown Books for Young Readers, 2007. Reprinted 2009. This novel recounts the trials of a Native American teenager who decides to transfer to an off-reservation high school in an attempt to gain a better education.

Who is the Man with the Name that Rhymes? It's been a while since another post. There are many topics that I have cached that I'd like to write on. If it weren't for the troubling aspect of so many things eating at my free time, you'd see more posts on here. I'm not sure there are many readers on here anyway, I've notice the traffic has slowed down to very little these days. Partly because Google hasn't been indexing the site correctly which I fixed not too long ago. I'm sure the sporadic updates are another reason. Eleven Untranslatable Words From Other Cultures, by Ella Frances Sanders The relationship between words and their meaning is a fascinating one, and linguists have spent countless years deconstructing it, taking it apart letter by letter, and trying to figure out why there are so many feelings and ideas that we cannot even put words to, and that our languages cannot identify. The idea that words cannot always say everything has been written about extensively -- as Friedrich Nietzsche said, "Words are but symbols for the relations of things to one another and to us; nowhere do they touch upon the absolute truth." No doubt the best book we’ve read that covers the subject is ‘Through The Language Glass’ by Guy Deutscher, which goes a long way to explaining and understanding these loopholes -- the gaps which mean there are leftover words without translations, and concepts that cannot be properly explained across cultures. Somehow narrowing it down to just a handful, we’ve illustrated 11 of these wonderful, untranslatable, if slightly elusive, words. 10 | Urdu: Goya

20 Best Finance Books That The Richest People Read If you want to become one of the richest people, is the answer to just read what they read? Maybe. But there’s more. There’s getting the information the wealthy are getting, and then thinking like they do about money and prosperity. You Need These 2 Types of Finance Books:

INFJ personality The INFJ personality type is very rare, making up less than one percent of the population, but they nonetheless leave their mark on the world. As Diplomats (NF), they have an inborn sense of idealism and morality, but what sets them apart is the accompanying Judging (J) trait – INFJs are not idle dreamers, but people capable of taking concrete steps to realize their goals and make a lasting positive impact. INFJs tend to see helping others as their purpose in life, but while people with this personality type can be found engaging rescue efforts and doing charity work, their real passion is to get to the heart of the issue so that people need not be rescued at all. Help Me Help You

Underrated books: Overlooked fiction and nonfiction of 2013. Illustration by Frederik Peeters Monday: Slate staffers pick their favorite books of 2013. Tuesday: The overlooked books of 2013. Wednesday: The best lines of 2013, and the best poetry of 2013. Thursday: Dan Kois’ 15 favorite books. The Crying of Lot 49 The Crying of Lot 49 is a novella by Thomas Pynchon, first published in 1966. The shortest of Pynchon's novels, it is about a woman, Oedipa Maas, possibly unearthing the centuries-old conflict between two mail distribution companies, Thurn und Taxis and the Trystero (or Tristero). The former actually existed and was the first firm to distribute postal mail; the latter is Pynchon's invention. The novel is often classified as a notable example of postmodern fiction.

Emily Esfahani Smith One Head, Two Brains How a radical epilepsy treatment in the early 20th century paved the way for modern-day understandings of perception, consciousness, and the self Mixed Signals: Why People Misunderstand Each Other The psychological quirks that make it tricky to get an accurate read on someone's emotions Pursuing 'Purpose' at the Expense of Family How the story of Chris Kyle resurfaced an the age-old moral dilemma In Relationships, Be Deliberate For milestones like moving in together, intent (rather than chronology) determines success. Masters of Love Science says lasting relationships come down to—you guessed it—kindness and generosity. In Grief, Try Personal Rituals The psychology of rituals in overcoming loss, restoring broken order As Babies, We Knew Morality New research supports the understanding that all people are born with a sense of good and bad. What does that say about altruism, community, and the capacity to kill one another?

Books Free: The Complete Guide To Home Canning I love finding and sharing free stuff with you guys! It’s amazing what you can find and how much money you can save with a little digging online. The print version of this huge, comprehensive canning book costs $20 plus P&P, but you can hit the links below and get a PDF version for free! […] Prepper’s Pantry: A Survival Food Guide (Currently FREE On Amazon)