7 Outdated Men's Style Rules to IGNORE. The 20 Greatest Fall Jackets in the History of Crime Fiction ‹ CrimeReads. It's not a true mystery until somebody shows up in tweed...or just a nice mid-length coat...anything sensible and earthy really. 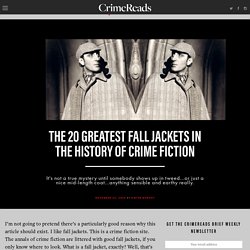 I’m not going to pretend there’s a particularly good reason why this article should exist. I like fall jackets. This is a crime fiction site. The annals of crime fiction are littered with good fall jackets, if you only know where to look. What is a fall jacket, exactly? Without further ado, these are, in my humble opinion, the 20 greatest fall jackets in crime fiction. Basil Rathbone as Sherlock Holmes. Margaret Rutherford as Miss Marple Humphrey Bogart as Philip Marlowe Gene Tierney as Laura Humphrey Bogart as Sam Spade. The Formality Scale: How Clothes Rank From Formal To Informal. One of the key tenets of classic style is to always dress appropriately for the occasion, which is most often stipulated by the required level of formality. But which articles of clothing are appropriate to different levels of formality, and how do they rank in comparison to one another? For an event hosted by Queen Elizabeth II, you’d select different items than you would for office work or for a weekend brunch with friends.

In this article, we present some general principles to determine the formality of nearly any menswear item and provide you with a list of clues to recognize where they fall on the scale of casual to formal. Casual vs. Formal Wear – Oversight Today. The debate between casual wear and formal wear is a sensitive topic in some regions and a non-issue in others. 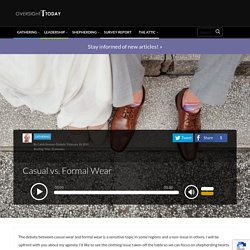 I will be upfront with you about my agenda: I’d like to see the clothing issue taken off the table so we can focus on shepherding hearts. I believe there’s more heat than light being created around this issue. My goal today is to come alongside other overseers who see both perspectives and just sift through some arguments being put forward to help reduce the heat and increase the amount of light being shed on this matter. Ivy Style. A couple of years ago I posed the question “Is trad clothing politically incorrect?” 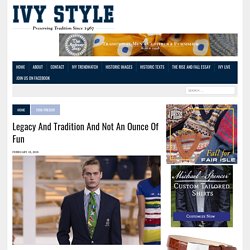 The general consensus was that the answer is “no,” and the reason is because Democrats and Republicans have historically and currently worn traditional American natural shoulder clothing in equal measures, so the look doesn’t belong to the Kennedy dynasty anymore than it does the Bush clan. But that’s not quite what I was getting at. What I was coyly suggesting was whether traditional clothing is something that hovers above party lines — like a poisonous fog. In other words, bad all around. Ripe for social ostracizing in educated coastal environments, or “spaces,” as the kids say these days.

Who, I mean, besides us. Yes the leading American designer, the great Gatsbyesque American success story, the genius fashion recycler of all the uppity looks from history — Ivy League, English country gentleman, Savile Row, Old Hollywood — has finally become obsolete. The Men’s Suit Purchase Priority List. Ivy or Preppy? The mentor who brought me out of retirement, Christian Chensvold, Founder and Editor-in-Chief @ivy-style, recently reprised a 2012 dialogue we enjoyed preparing for the Museum of Fashion Institute of Technology smash exhibit utilizing his blog’s monicker, Ivy Style. 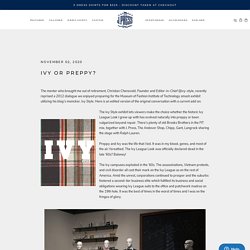 Here is an edited version of the original conversation with a current add on: The Ivy Style exhibit lets viewers make the choice whether the historic Ivy League Look I grew up with has evolved naturally into preppy or been vulgarized beyond repair. There’s plenty of old Brooks Brothers in the FIT mix, together with J. Press, The Andover Shop, Chipp, Gant, Langrock sharing the stage with Ralph Lauren. Ivy Style. Did you know that nine out of 10 men prefer chemically treated non-iron shirts that feel funny and look artificially perfect to pure unadulterated cotton? 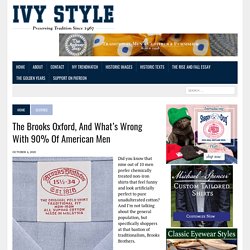 And I’m not talking about the general population, but specifically shoppers at that bastion of traditionalism, Brooks Brothers. Some years ago Ralph Gardner had an interesting write-up in the Wall Street Journal on the classic Brooks Brothers oxford, which he calls “the bedrock of our republic.” After having been raised on polyester in what one assumes were the 1970s, Mr.

Gardner discovered Brooks Brothers’ classic oxfords and has been a devoted fan ever since. Suiting Up Eli Frosh. Suiting up Eli frosh in the Heyday of Ivy was do-or-die for New Haven clothiers. 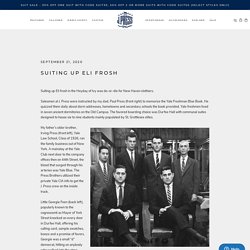 The high watermark of the Ivy League Suit in America coincided with the Kennedy years. 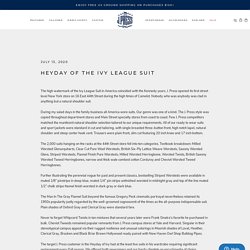 J. Press opened its first street level New York store on 16 East 44th Street during the high times of Camelot. Nobody who was anybody was clad in anything but a natural shoulder suit. During my salad days in the family business all America wore suits. Sizing for Clothes Can Be Confusing. This Will Help You Get it Right. When you’re trying to nail down the right size for clothing, it’s easy to morph into the math lady meme real quick. 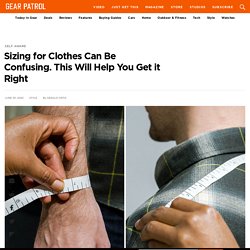 Except, instead of floating formulas for calculating the volume of a cone, it’s sizing charts for jackets and jeans. Letter sizing (S, M, L, XL, etc.) simplifies the process, but basically every brand has its own definition of those letters. In What Direction Do Men Wear Belts? The psychological reason why clothes can make or break you. Why Do Suits Have a Random Buttonhole on the Lapel? We Found Out. Welcome to Further Details, a series dedicated to ubiquitous but overlooked elements hidden on your favorite products.

This week: the buttonhole near the notch of your blazer’s lapel. As you suit up, for work or perhaps a summer wedding, you might notice a small detail as you button up your jacket — a rogue buttonhole near the notch of the lapel. It’s definitely there, even if it is sewn shut with no discernible way to open it without ruining your only good suit. You look to the other lapel, but it’s completely smooth, void of any clues. The Accidentally Couture Life of a Samurai. 10 Black Tie Rules To ALWAYS Follow. A Celebration of JFK's Eternal Style. It's Time to Kill the Slim Suit. Every night I sit down to watch The Late Show with Stephen Colbert, and every night I become immediately annoyed by how his suit fits. 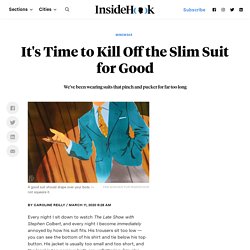 His trousers sit too low — you can see the bottom of his shirt and tie below his top button. Business Casual Men's Attire & Dress Code Explained. Business casual is a dress code men are confronted with everywhere, but what does it really mean? In this Business Casual Guide for men, we answer this question in detail, share DO’s and DON’Ts and provide specific advice on what you can wear so you are dressed to the T. Business Casual Video Please watch the video & read the guide for the best explanation of Business Casual.

If you enjoy this guide, please subscribe for free on youtube and sign up to our complimentary email newsletter here. Also, if you are more interested in the smart casual dress code, click here. Is the Suit Dying? - The Role of Classic Menswear in Today's World. As we enter the third decade of the 21st century, there’s been an increasing amount of scrutiny placed on that most quintessential of menswear ensembles, the suit. The List – Red Clay Soul. Ivy Style. I am Dandy - The Return of the Elegant Gentleman Book Review. Earlier today, I received a unexpected Fedex delivery, and when I opened the package I was positively surprised to see a copy of Rose Callahan’s & Nathaniel Adams’ book I am Dandy: The Return of the Elegant Gentleman. I have followed this project very closely; I have always admired Rose’s fabulous photos at The Dandy Portraits since the inception of the blog.

I am Dandy Coffee Table Book. The Preppy Style & Clothes Primer. This guide is about prep clothing & preppy style. It’s not exclusive to those who attend or are alumnus of Ivy League schools and preparatory academies in the Northeast United States — it’s for everybody interested in this (life)style. Prep Style Video What Does Prep Mean Traditionally? Old Ivy League Money! British Men's Style - Menswear Traditions of England & the UK. (1) 15 Most Essential Accessories For Men. Watch Sizes Guide - How To Buy The Right Watch For Your Wrist Size. Shirt Collar Styles for Men: A Complete Guide - Point, Cutaway & More. Within the framework of a standard men’s dress shirt, many variations can exist; there are differences in fit, cuff style, buttons, and so on. Why Button-Down Shirts Have Loops On the Back.

All around the country, traffic lights help maintain order on roadways by signaling when it’s time to stop (red), slow down (yellow), or continue (green). While the color scheme appears obvious now, it had to have been created and invented somewhere. How Long Should Your Suit Jacket Be? 3 Methods Compared - My Dapper Self. Cup your fingers? Fashion Week Continues! Now Fashion!

The Sweater Guide. Sleeve Length Guide for Suits, Jackets and Shirts. Someone Made This Simple Guide On Men’s Fashion That Illustrates The Dos, Don’ts, And ‘Oh God, Please Don’ts’ Some wardrobe classics never age. Like the leather biker and white t-shirt combo. The Literary James Bond: How to Dress Like the Original 007. When most people think about secret agent 007, Sean Connery’s timeless elegance from the early films comes to mind. How a Men's Dress Shirt Should Fit. Japanese, Korean & Chinese Menswear - Classic Styles. Back to School Fashion circa 1939. G.H. Bass "Weejuns" Loafers: Is It Worth It? - Trad Penny Loafer Review. Brogues Shoe & Wingtip Guide for Men. Fashion Week Continued! Best Sunglasses for Your Face Shape & Skin Tone. Pitti Uomo Sunglasses. Persol Sunglasses Review Model 649 and 714 - Is It Worth It? Kim Kardashian will rename her “Kimono” shapewear line backlash. Virginie Viard replaces Chanel’s Karl Lagerfeld. Tumblr User Explains The Differences Between Traditional Women’s Clothing In East Asia.

What Rings Mean on Each Finger - Men's Ring Meanings & Definitions. How To Wash a Suit at Home. How To Fold A Pocket Square - 5 Easy & Quick Ways to Fold Handkerchiefs. Suit Alterations: What a Tailor Can (& Can't) Do. 14 Problems Only Well-Dressed Men Have. Sleeve Length Guide for Suits, Jackets and Shirts. 10 Things Your Father Should Have Taught You About Style. Trilby, Homburg, & Pork Pie Hat Guide. James Dean - Gentleman of Style. How to Survive a Sartorial Emergency. Ian's Shoelace Site – Ian Knot – Ian's Fast Shoelace Knot. How to tie a Pratt Knot (Shelby Knot) animated, illustrated and described. How To Sew On A Button. Men's Hat Etiquette Guide. Bomber and Flight Jacket Guide. Cary Grant Style Secrets & How To Dress Like Him.

Anatomy of a Dress Shoe. Fedora Felt Hat Guide. Men's Hats: Anatomy & Vocabulary. Cocktail Attire For Men - Dress Code Guide For Weddings & Events. Shell Cordovan Leather Explained. Houndstooth Guide. Justin Bieber's Hair Is the Epitome of Dirtcore Style. My Bow Tie Collection. How Pants Should Fit. Should Men Wear Pleated Pants? Features of a Pair of Pants. How To Find The Right Colors For Your Skintone. What are the Differences among British, Italian and American Suit Styles? How to Wear a Denim Shirt. 9 Reasons Dressing Down Is Overrated. Should You Wear a Jacket Without a Tie? Business Attire Dress Code Explained. Beginner Fountain Pen Mistakes. Dressing the Professor: What to Wear for Working in Academia.

13 Most Over and Underrated Dress Shirts for Men. Wedding Dress Codes for Men - What to Wear to a Wedding. How to Wear Polka Dots in Menswear. 12 Ways to Stay Cool While Wearing Classic Menswear. The Anatomy of a Suit Jacket: A Comprehensive Vocabulary. My Pocket Square Collection. How to Wear a Boutonniere. Points To Remember When Sporting A Flower In Your Lapel Buttonhole.