Is Fast Fashion Heading for a Slowdown? There is speculation brewing in the apparel industry that consumers are getting tired of fast fashion, especially in the US, preferring instead to pay a premium for garments made from better quality fabrics that last longer. 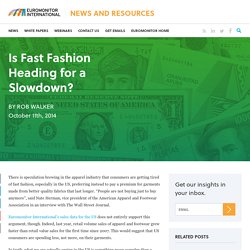 “People are not buying just to buy anymore”, said Nate Herman, vice president of the American Apparel and Footwear Association in an interview with The Wall Street Journal. Euromonitor International’s sales data for the US does not entirely support this argument, though. Indeed, last year, retail volume sales of apparel and footwear grew faster than retail value sales for the first time since 2007. Fast vs Slow Fashion « Vivienne Westwood: Everyone buys too many clothes. Dame Vivienne Westwood has made a plea to the public, especially "poor people", to buy fewer and better quality clothes as she showcased her latest designs at London Fashion Week. 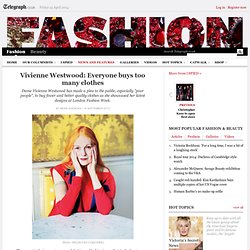 BY News agencies | 16 September 2013 Photo: FRANCOIS COQUEREL The eccentric designer sat among celebrities and fashion journalists in the front row for the show at the German Gymnasium in north London, instead of waiting backstage as usual. It meant she had pride of place for the dramatic opening, which saw supermodel Lily Cole performing an interpretative dance while wearing a flowing, Grecian-style gown. Speaking after the show, Dame Vivienne said: "Buy less. "I mean, I know I'm lucky, I can just take things and borrow them and I'm just okay, but I hate having too many clothes. "It doesn't mean therefore you have to just buy anything cheap. Gill Linton: Why Fast Fashion Is On Its Way Out [PSFK 2013] As part of the run-up to PSFK CONFERENCE 2013 in New York this April, PSFK will be publishing a series of short interviews with speakers to give a taste of what will be discussed in this meeting of creative minds. 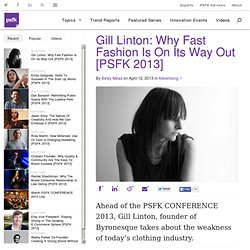 Gill Linton has worked for several start-ups in London and New York and is the founder of Byronesque, a website focused on vintage fashion in both an editorial and e-commerce perspective. She caught up with PSFK about her venture and her thoughts about the vintage clothing space. Since you last spoke as an advertising strategist, you have gone on to launch your own start-up Byronesque. 'Slow fashion' is a must-have ... and not just for this season. The credit crunch has put paid to high times on the high street, but retailers are reporting the rise of 'slow fashion' as consumers think harder about what they buy. 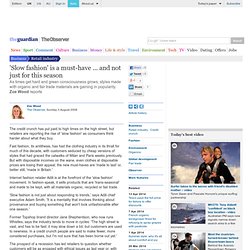 Are consumers done with fast fashion? Editor's note: This article originally appeared at BSR Insight as part of a series on the tragedy in Bangladesh. 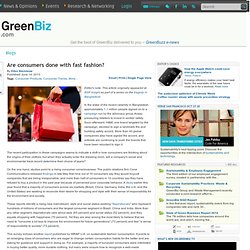 In the wake of the recent calamity in Bangladesh, approximately 1.1 million people signed on to a campaign run by the advocacy group Avaaz pressuring retailers to invest in worker safety. Soon afterward, H&M, one brand targeted by the campaign, decided to sign a landmark fire and building safety accord. More than 40 global companies also have signed the accord, and activists are continuing to push the brands that have been reluctant to sign it. The recent participation in these campaigns seems to indicate a shift in how consumers are thinking about the origins of their clothes, but when they actually enter the dressing room, will a company's social and environmental track record determine their choice of jeans? On the one hand, studies point to a rising consumer consciousness. This survey echoes another report published by WRAP U.K. on sustainable fashion consumption.

Fast Fashion: Too Much of a Good Thing. Consumers unconsciously squander money with big-name fashion retailers who introduce new designs every few weeks. 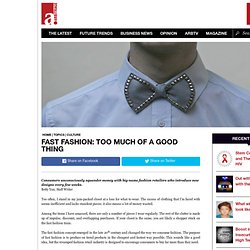 Betty Yan, Staff Writer Too often, I stand in my jam-packed closet at a loss for what to wear. The excess of clothing that I’m faced with seems inefficient and lacks standout pieces; it also means a lot of money wasted. Among the items I have amassed, there are only a number of pieces I wear regularly. The Future Of Fashion Retailing: The Zara Approach (Part 2 of 3) Seasonless Fashion - the Fashion Spot. A Seasonless Era Approaches July 1st, 2008 - Global With its autumn/winter and spring/summer collection cycles, fashion has always been fast-paced.

And in recent years, retailers have been upping the ante by rearranging their store's offerings with increased frequency in order to keep customers engaged. The result has been an even speedier industry, in which only the most agile labels—typically the blue-chip brands—can compete. Unveiling Fashion: Business, Culture, and Identity in the Most Glamorous ... - Frédéric Godart. For most people, fashion can daze and confuse. 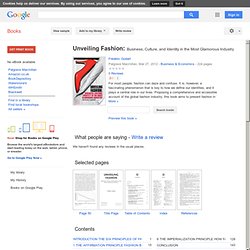 It is, however, a fascinating phenomenon that is key to how we define our identities, and it plays a central role in our lives. Proposing a comprehensive and accessible account of the global fashion industry, this book aims to present fashion in all its diversity and richness, to 'unveil' its mysterious mechanisms. Drawing on six core principles from the industry, Frédéric Godart guides the reader through the economic, cultural and social arena of the world's most glamorous industry.