Miuccia Prada Patrizio Bertelli Italian Tax Authority Investigation. 29 September 2014 Scarlett Kilcooley-O'Halloran MIUCCIA PRADA and her husband Patrizio Bertelli are being investigated by the Italian tax authorities, relating to "the accuracy of certain past tax filings", the company has revealed. 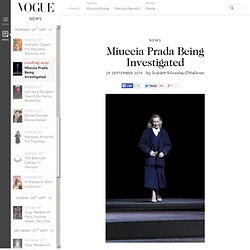 The brand, however, reiterated that both Prada and Bertelli made an agreement with the authorities last year when they made a voluntary disclosure on their earnings. "This agreement completely satisfied the claims of the Italian tax authority, as declared and confirmed by the authority itself," the brand said this morning, confirming that neither the company, or any of the companies that it owns, are involved. Prada and Bertelli reportedly paid€470 million in January to the tax authorities, bringing the brand's legal headquarters back to Italy and resolving any back-dated tax payments, according to a source, reports WWD. Related Show. LONDON AUTUMN 2014: WHERE TO SHOP. Words by Unsah Malik @unsahmalik We’ve created the ultimate shopping guide for both locals and visitors. 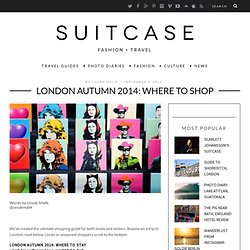 Anyone on a trip to London, read below. Locals or seasoned shoppers scroll to the bottom. PORTOBELLO ROAD Currently standing as the world’s largest antique market, a trip to Portobello Road proves just as fun for avid collectors as passersby. It first took form in 1945 when ‘Rag and Bone’ men created stalls to sell their second-hand household items, and has been expanding ever since. 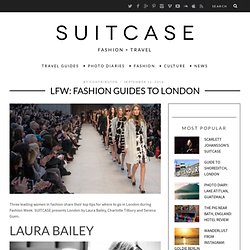 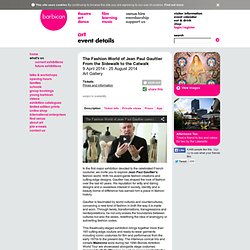 With his avant-garde fashion creations and cutting-edge designs, Gaultier has shaped the look of fashion over the last 40 years. His reputation for witty and daring designs and a ceaseless interest in society, identity and a beauty borne of difference has earned him a place in fashion history. Gaultier is fascinated by world cultures and countercultures, conceiving a new kind of fashion in both the way it is made and worn. Through twists, transformations, transgressions and reinterpretations, he not only erases the boundaries between cultures but also the sexes, redefining the idea of androgyny or subverting fashion codes. This theatrically-staged exhibition brings together more than 165 cutting-edge couture and ready-to-wear garments including iconic costumes for film and performance from the early 1970s to the present day. The Summer Fashion Show, Rise Super Club - General London Event.

The Sound of COS.