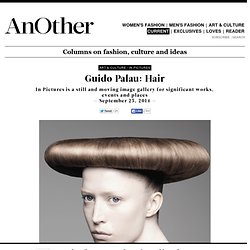 Elaborate Frida-Kahlo style pleating. 2013’s big curl revival. Each one of these hair trends can be largely credited to Guido Palau, a name now synonymous with reinventing youth culture, from punk rock Mohawks and Bowie hair wedges to the incredible architectural basket weave created for Alexander McQueen in 2011. Once told by Vidal Sassoon that he’d never make it as a hairdresser, Palau’s handiwork now stands as a well-oiled pillar within fashion, his creations inspired by a blend of raw talent and youthful rebellion. A new book is released this month celebrating Palau’s legacy, and his iconic alliance with photographer David Sims. Titled Hair, (the follow-up to Heads, published in 2000), the book is dedicated to the late Alexander “Lee” McQueen, whom they both worked closely with. On youth culture... On 80s street style... " Tibi - One Word, One Shot.

She's not a model, actress or musician, but rebekah williams is a real 21st century girl. Those who criticise our generation forget who raised it! 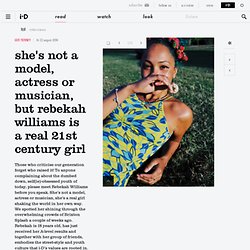 To anyone complaining about the dumbed down, self(ie)-obsessed youth of today, please meet Rebekah Williams before you speak. She’s not a model, actress or musician, she’s a real girl shaking the world in her own way. We spotted her shining through the overwhelming crowds of Brixton Splash a couple of weeks ago.

Rebekah is 18 years old, has just received her A-level results and together with her group of friends, embodies the street-style and youth culture that i-D’s values are rooted in. The Silver Firefly - RusshMagazine. Miss Penny Dreadful: Mods Vs Rockers. I ended up watching Quadrophena yesterday after I got home from town. 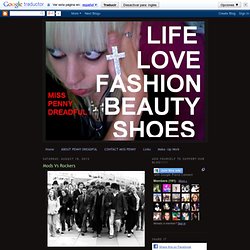 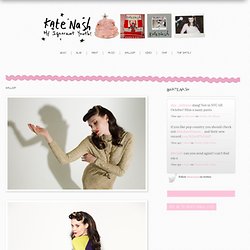 Beautiful Fül. The Future Of The Rudeboy. With the exhibition, The Return Of The Rudeboy, closing at Somerset House last weekend, i-D caught up with Dean Chalkley and Harris Elliott, the men behind it, to talk about the relevance of the Rudeboy in the 21st Century. 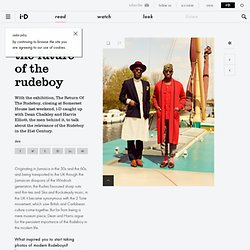 Originating in Jamaica in the 50s and the 60s, and being transported to the UK through the Jamaican diaspora of the Windrush generation, the Rudies favoured sharp suits and thin ties and Ska and Rocksteady music, in the UK it became synonymous with the 2 Tone movement, which saw British and Caribbean culture come together. But far from being a mere museum piece, Dean and Harris argue for the persistent importance of the Rudeboy in the modern life. What inspired you to start taking photos of modern Rudeboys? Dean: The inspiration came from the people we observed day to day, knew or came to meet through this journey.

Harris and I have very keen eyes for what is going on in a cultural sense, what is bubbling up, it has to some degree become a natural instinct. SUPERSELECTED - Black Fashion Magazine Black Models Black Contemporary Artists Art Black Musicians. Fashion's new rebels: CSM's class of 2014. With an infamous reputation for nurturing creativity, the leading lights of Central Saint Martins BA Fashion course are radical thinkers. 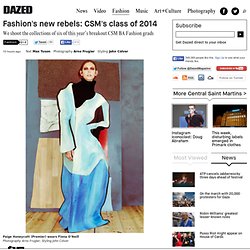 Diverse in their inspirations, this year’s graduates went from small Irish towns to seventies Nigeria and back again in their quest to thrust the future of fashion in our faces. Six of the most head-turning collections from the 2014 cohort have been given the Dazed treatment in a shoot by Arno Frugier, former assistant to Paolo Roversi, with styling by John Colver. Here we speak to fashion’s future stars about their eclectic inspirations, life at CSM and what’s yet to come. “I found a sign on a mattress saying ‘nothing really mattress’, and that's where it began,” reveals Canadian/Korean designer Jo Park of her “serious but humorous” collection. 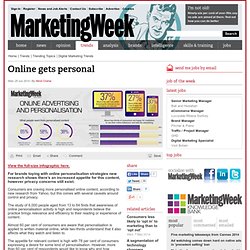 For brands toying with online personalisation strategies new research shows there’s an increased appetite for this content, however privacy concerns still exist. Consumers are craving more personalised online content, according to new research from Yahoo, but this comes with several caveats around control and privacy. The study of 6,000 people aged from 13 to 64 finds that awareness of online personalisation activity is high and respondents believe the practice brings relevance and efficiency to their reading or experience of content. Almost 60 per cent of consumers are aware that personalisation is applied to written material online, while two-thirds understand that it also affects what they watch and listen to. The appetite for relevant content is high with 78 per cent of consumers expressing a desire for some kind of personalisation.

Basis of activity However, Owen says there must be limits to personalisation, particularly in retail. Consumer mood. Asai andrews ta csm.