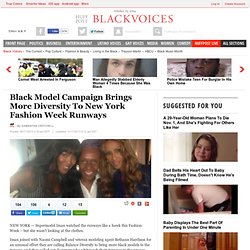 Iman joined with Naomi Campbell and veteran modeling agent Bethann Hardison for an unusual effort they are calling Balance Diversity to bring more black models to the runway, and they called out designers who whitewash their runways in the process. By all indications, their open letter made a difference, with an uptick in diversity at the previews that ended last week. All the top designers presenting in New York used at least one black model, and some who previously had no black models used as many as seven this season. "I've always said runways and photos are important to shape our young girls," Iman said in an interview last week. "To see models of color on the runway is important to the self-esteem of our young girls. What remains to be seen: Is the greater black presence on runways a lasting trend – or just more fast fashion?

Diversity On The Runway Is Slightly Better, But It's Still Super White (INFOGRAPHIC) Although we're pleased with many of the trends sent down the New York Fashion Week runways, we wish model diversity was one of them. 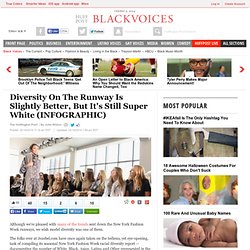 The folks over at Jezebel.com have once again taken on the tedious, yet eye-opening, task of compiling its seasonal New York Fashion Week racial diversity report -- documenting the number of White, Black, Asian, Latina and Other represented in the shows-- and sadly little has changed. According to Jezebel, based on the 148 Fall/Winter 2014 runway shows (excluding menswear) a total of 4,621 looks were presented and, of those looks, 985 were worn by models of color. That resulted in 78.68 percent of the outfits being shown by white models. In comparison, last season (Spring/Summer 2014) that number was 79.98 percent making for a small improvement. However, it doesn't feel like a win since the percentage has remained at approximately 80 percent for the past six seasons.

The Black Man in the White House: Racism Is Alive and Well in America  The Civil Rights Act of 1964 ended segregation in public places and banned employment discrimination on the basis of race, color, religion, sex or national origin. 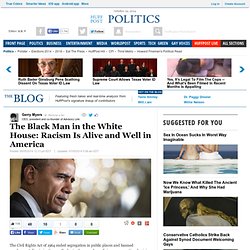 While this law was created to protect voter's rights and eliminate segregation in schools, restaurants and workplaces, the reality is that 50 years later Americans are still battling with these issues. While many say racism is over and point to the fact that America has its first black president, Barack Obama's election actually ignited racial tension in the country, rather than ending it. As a result white supremacists, hate crimes and Internet sites like Stormfront have grown exponentially. These extremist organizations are fueled by an increased fear of nonwhites' power in government and the rising number of immigrants that are taking over "their" America. Racists choose to disregard the laws of this country in favor of their own warped ideology.

Also in question is the fairness of our judicial process. If The Supreme Court Says Racism Is Pretty Much Over, Why Are So Many People Still Being So Racist? The U.S. 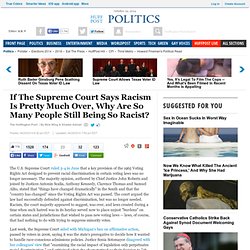 Supreme Court ruled 5-4 in June that a key provision of the 1965 Voting Rights Act designed to prevent racial discrimination in certain voting laws was no longer necessary. The majority opinion, authored by Chief Justice John Roberts and joined by Justices Antonin Scalia, Anthony Kennedy, Clarence Thomas and Samuel Alito, stated that “things have changed dramatically” in the South and that the "country has changed" since the Voting Rights Act was passed.

The court argued the law had successfully defended against discrimination, but was no longer needed. Racism, the court majority appeared to suggest, was over, and laws created during a time when such hatred was in its heyday served now to place unjust "burdens" on certain states and jurisdictions that wished to pass new voting laws -- laws, of course, that had nothing to do with trying to suppress minority votes. Victoria's Secret 2013 Fashion Show Facts And Photos. The Runway's Race Problem Reheats Before Fashion Week. In fashion, anything can be the new black, except on the runway, where white still rules. 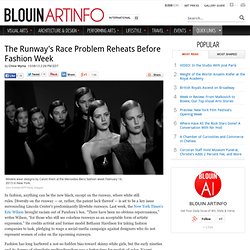 Diversity on the runway — or, rather, the patent lack thereof — is set to be a key issue surrounding Lincoln Center’s predominantly lilywhite runways. Last week, the New York Times’s Eric Wilson brought racism out of Pandora’s box. “There have been no obvious repercussions,” writes Wilson, “for those who still see colorless runways as an acceptable form of artistic expression.” He credits activist and former model Bethann Hardison for taking fashion companies to task, pledging to wage a social-media campaign against designers who do not represent women of color on the upcoming runways. Fashion has long harbored a not-so-hidden bias toward skinny white girls, but the early nineties and its dogma of pluralistic multiculturalism was a better time for models of color. Modeling, unlike futures trading or lobster fishing, is an inherently lookist profession.

Racial Diversity on the Runway. It's Time to Address Fashion's Race Problem. NEW YORK, United States — Back in 2008, when cries were raised about the lack of racial diversity on the runways and in the fashion business at large, Italian Vogue published its timely “all black” issue. 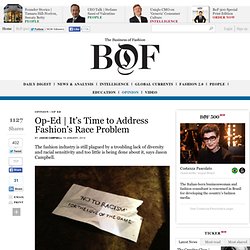 Fashion professionals like myself (I was included in the issue) hailed this act of recognition and considered it a watershed moment, a turning of the tide. But fast forward to 2014 and Italian Vogue continues to show its so-called commitment to covering all things fashionable and black with an offensive, misguided and racially insensitive section of its website called “Vogue Black.” “Vogue Black” was launched back in 2010, but what recently attracted my attention was its coverage from Pitti Uomo in Florence for which the site’s editors thought it appropriate to segregate black street style images in a section of the site’s “Black Blog” called “Vogueista Black.” I had a visceral reaction to this discovery. Do viewers require a different lens to appreciate our sense of style? The real reason there's no diversity on the runway? New data reveals how many models of color are REALLY sent to fashion week by their New York agencies. 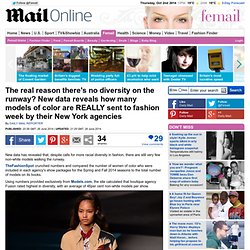 TheFashionSpot crunched numbers and compared the number of women of color who were included in each agency's show packages for the Spring and Fall 2014 seasons to the total number of models on its books. Using numbers provided exclusively from Models.com, the site calculated that boutique agency Fusion rated highest in diversity, with an average of 46per cent non-white models per show. Cultural trends: Women of color such as bi-racial Malaika Firth are booking prominent campaigns, but the industry is slow to change. 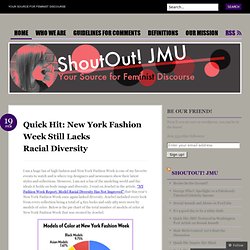