You are walking along a very busy shopping street.

Out of the corner of your eye, you spot a person lying on the sideways; motionless.

Lots of people walk pass the unconscious person but no one seems bothered enough to go up and see what they can do to help.

In this situation, what would you do?

Let's explore about the bystander effect and its counteractive measures in this collection! The Bystander Effect: Myth or Fact? Quotation Elie Wiesel What hurts the victim most is not the cruelty of 79 84 70. We Are All Bystanders. For more than 40 years, Peggy Kirihara has felt guilty about Stewart. 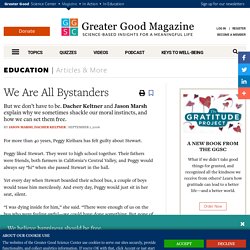 “I think I would say something now, but I don’t know for sure,” she said. Many of us share Peggy’s concern. Why don’t we help in these situations? “Why,” asked Garfield, “do some people respond to these crises while others don’t?” Altruistic inertia. The Science of Empathy. Bystander Effect: What Is It and What You Can Do About It.

What the bystander effect looks like A little after 3 a.m. on March 13, 1964, Catherine “Kitty” Genovese parked her car and walked to her apartment in Queens, New York, after finishing her shift as a bar manager. Serial killer Winston Moseley was out to victimize someone that night. Genovese became his target. When he followed her, she ran. As Moseley reached her and began stabbing her with a hunting knife, Genovese screamed, “Oh, my God, he stabbed me! When lights in surrounding apartments flipped on and one man called out his window, the attacker ran and hid in the shadows. There was widespread public condemnation of the witnesses who did not come to Kitty Genovese’s aid. The related terms “bystander effect” and “diffusion of responsibility” were coined by social psychologists as a result of this research.

The bystander effect describes situations in which a group of bystanders witness harm being done, yet do nothing to help or stop the harmful activity. According to the U.S. THE BYSTANDER EFFECT. Reducing the Bystander Effect. As discussed, there are a number of factors that magnify the Bystander Effect.

Fortunately, there are also a number of factors that weaken it. Once again, factors can be divided into characteristics of the situation, and of the people. Situational characteristics Dangers of the incident The perceived danger of intervening in a critical situation has the greatest influence in reducing the Bystander Effect. Several explanations could account for the role of perceived danger. Most fundamentally, the arousal: cost–reward model suggests that taking action is a response to the physiological arousal engendered by a critical situation, and that. The Bystander Effect vs. The Good Samaritan Effect. 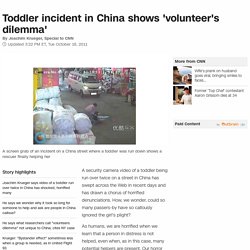 How, we wonder, could so many passers-by have so callously ignored the girl's plight? As humans, we are horrified when we learn that a person in distress is not helped, even when, as in this case, many potential helpers are present. Our horror increases if the person is victimized in a particularly vicious or careless way by fellow human beings. Our horror is further heightened when we learn that the victim is helpless and the kind of person who normally stimulates our instinct to aid and protect. An avoidable murder of a student caught on tape: the sickening power of the bystander effect. On Sept. 17, the life of a 16-year-old high schooler in Long Island ended tragically in a violent brawl outside a strip mall.

Khaseen Morris was told to show up outside the mall at a certain time by several others his age, after he was seen walking home the girlfriend of another boy. Morris showed up and was immediately attacked by a group of five teenagers. A senseless brawl erupted and Morris was stabbed repeatedly in the chest, dying later that night in the hospital. George Floyd: How race may affect what bystanders can do for detainees. Surveillance video in Minneapolis shows the first moments of George Floyd's police interaction. 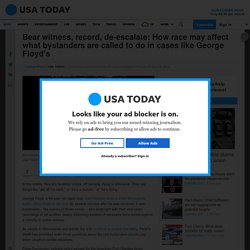 MY Consent Day Bystander Quiz: What would YOU do? Survey.