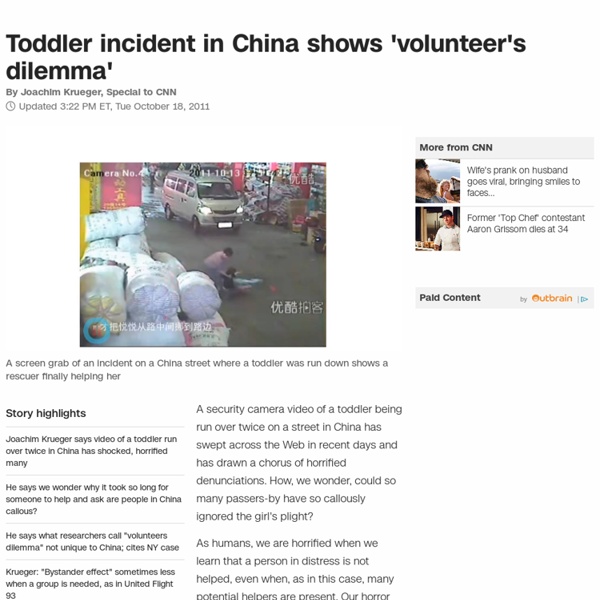 A security camera video of a toddler being run over twice on a street in China has swept across the Web in recent days and has drawn a chorus of horrified denunciations. How, we wonder, could so many passers-by have so callously ignored the girl's plight? As humans, we are horrified when we learn that a person in distress is not helped, even when, as in this case, many potential helpers are present. Our horror increases if the person is victimized in a particularly vicious or careless way by fellow human beings. Our horror is further heightened when we learn that the victim is helpless and the kind of person who normally stimulates our instinct to aid and protect. Our spontaneous reaction is to say: "Had I been there, I would have helped; what is wrong with these people?" It is true that cultural differences exist in many aspects of human behavior, and many of these differences are not trivial. Since the original experiments, many studies have explored the bystander effect.

What a Tragic Traffic Incident Says About Chinese Social Ethics A video recording of another horrific traffic incident has gripped Chinese social media. After being knocked to the ground by a taxi, a woman lies prone in the middle of a busy road. The taxi drives on, though its two occupants are later detained; neither nearby pedestrians nor other drivers stop to help the woman at the scene, though more than a dozen people reported the incident to the police. The woman is run over by another vehicle, and later dies from her injuries. The incident actually happened in April 2017 in Zhumadian, a city in central China’s Henan province, but the surveillance video surfaced only last week.

Written Answer by Minister for Law, K Shanmugam, to Parliamentary Question on the introduction of a Good Samaritan law in Singapore 14 Feb 2012 Posted in Parliamentary speeches and responses Associate Professor Fatimah Lateef, Marine Parade GRC Question To ask the Minister for Law whether it is time to reconsider the appropriateness of introducing a Good Samaritan law in Singapore. Answer The honourable Member last raised this issue in 2008 with Professor S Jayakumar, then the Deputy Prime Minister and Minister for Law.

Bystander Effect: What Is It and What You Can Do About It What the bystander effect looks like A little after 3 a.m. on March 13, 1964, Catherine “Kitty” Genovese parked her car and walked to her apartment in Queens, New York, after finishing her shift as a bar manager. Serial killer Winston Moseley was out to victimize someone that night. Overcoming the Bystander Effect Have you ever been a hero? Going about our daily routines, few of us have the opportunity to save a life or disrupt a crime in progress—fewer still take that opportunity when it presents itself. I once witnessed a car accident in which the guilty party leapt from his disabled vehicle and fled the scene. I quickly pulled over and dialed 911. Fortunately, another passerby stopped and apprehended the suspect.

TODAYonline SINGAPORE — There is no need for a Good Samaritan Law, because Singaporeans continue to render assistance when needed, said Senior Minister of State for Law and Education Indranee Rajah. Speaking in Parliament today (May 29), Ms Indranee said the issue had been brought before the House twice before. The reasons deeming the law unnecessary then, still hold today. A Good Samaritan Law protects people who render help during emergencies from criminal or civil liability. Ms Indranee explained that current laws do not give rise to any major liability concerns for Good Samaritans. Reducing the Bystander Effect As discussed, there are a number of factors that magnify the Bystander Effect. Fortunately, there are also a number of factors that weaken it. Once again, factors can be divided into characteristics of the situation, and of the people. Situational characteristics Dangers of the incident The perceived danger of intervening in a critical situation has the greatest influence in reducing the Bystander Effect.

New Yorkers grapple with stabbing death New Yorkers are grappling with the inaction of more than two dozen pedestrians who didn't help a Good Samaritan bleeding to death on a sidewalk after he tried to save a woman from a knife-wielding man in Queens, N.Y. Hugo Alfredo Tale-Yax, 31, was stabbed at about 7:20 a.m. on April 18 as he tried to help a woman being threatened by a knife-wielding man. Surveillance video from an apartment building captured Tale-Yax chasing the attacker before collapsing on the sidewalk. Why we still look away: Kitty Genovese, James Bulger and the bystander effect More than half a century later, the death of Kitty Genovese continues to remind us of the disconnect between what we believe about ourselves and how we really act under pressure. The murder of the 28-year-old outside her apartment in the Queens neighborhood of Kew Gardens in the early morning of 13 March 1964 rippled through New York City and around the world. How could a young, independent woman who lived on her own terms be so easily struck down? How could so many neighbors look on and turn away as she was stabbed repeatedly on the street and in her apartment building?

We Are All Bystanders For more than 40 years, Peggy Kirihara has felt guilty about Stewart. Peggy liked Stewart. They went to high school together. Their fathers were friends, both farmers in California’s Central Valley, and Peggy would always say “hi” when she passed Stewart in the hall.