We Are All Bystanders 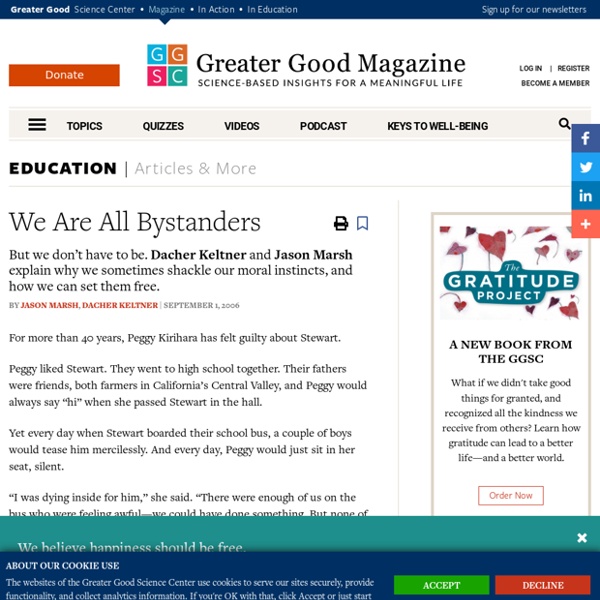 For more than 40 years, Peggy Kirihara has felt guilty about Stewart. Peggy liked Stewart. They went to high school together. Their fathers were friends, both farmers in California’s Central Valley, and Peggy would always say “hi” when she passed Stewart in the hall. Yet every day when Stewart boarded their school bus, a couple of boys would tease him mercilessly. And every day, Peggy would just sit in her seat, silent. “I was dying inside for him,” she said. Peggy still can’t explain why she didn’t stick up for Stewart. © Damian King But perhaps most surprising—and distressing—to Peggy is that she considers herself an assertive and moral person, yet those convictions aren’t backed up by her conduct on the bus. “I think I would say something now, but I don’t know for sure,” she said. Many of us share Peggy’s concern. Why don’t we help in these situations? “Why,” asked Garfield, “do some people respond to these crises while others don’t?” Altruistic inertia Who are these people? © Damian King

What Is the 'Bystander Effect' and How Do People Overcome It? This story appeared in the June 2020 issue as "Action!" Subscribe to Discover magazine for more stories like this. On April 9, 2017, three security officers from the Chicago Department of Aviation forcibly removed David Dao from an overbooked United Airlines flight. Dao, a 69-year-old doctor, was dragged down the plane’s aisle after he refused to give up his seat. Bystander Effect: What Is It and What You Can Do About It What the bystander effect looks like A little after 3 a.m. on March 13, 1964, Catherine “Kitty” Genovese parked her car and walked to her apartment in Queens, New York, after finishing her shift as a bar manager. Serial killer Winston Moseley was out to victimize someone that night.

Bystander Effect: What Is It and What You Can Do About It What the bystander effect looks like A little after 3 a.m. on March 13, 1964, Catherine “Kitty” Genovese parked her car and walked to her apartment in Queens, New York, after finishing her shift as a bar manager. Serial killer Winston Moseley was out to victimize someone that night. Bystander Effect Bystander Effect Definition Individuals who see or hear an emergency (but are otherwise uninvolved) are called bystanders. The bystander effect describes the phenomenon in which such individuals are less likely to seek help or give assistance when others are present. This does not mean that bystanders are apathetic to the plight of others, for bystanders often show signs of distress, anxiety, and concern if they delay responding or fail to respond at all. It also does not necessarily mean that a victim will be less likely to receive help as the number of bystanders present increases—after all, the greater the number of other people present, the greater is the likelihood that at least one of them will intervene.

The Bystander Effect and Altruism Learning Objectives Explain the factors that influence human altruism, including reciprocal altruism and diffusion of responsibility. Go to YouTube and search for episodes of “Primetime: What Would You Do?” You will find video segments in which apparently innocent individuals are victimized, while onlookers typically fail to intervene. The events are all staged, but they are very real to the bystanders on the scene. An avoidable murder of a student caught on tape: the sickening power of the bystander effect On Sept. 17, the life of a 16-year-old high schooler in Long Island ended tragically in a violent brawl outside a strip mall. Khaseen Morris was told to show up outside the mall at a certain time by several others his age, after he was seen walking home the girlfriend of another boy. Morris showed up and was immediately attacked by a group of five teenagers.

Bystander Effect Bystander effect, the inhibiting influence of the presence of others on a person’s willingness to help someone in need. Research has shown that, even in an emergency, a bystander is less likely to extend help when he or she is in the real or imagined presence of others than when he or she is alone. Moreover, the number of others is important, such that more bystanders leads to less assistance, although the impact of each additional bystander has a diminishing impact on helping. Investigations of the bystander effect in the 1960s and ’70s sparked a wealth of research on helping behaviour, which has expanded beyond emergency situations to include everyday forms of helping. By illuminating the power of situations to affect individuals’ perceptions, decisions, and behaviour, study of the bystander effect continues to influence the course of social psychological theory and research.

Now. Powered by Northrop Grumman If you see someone in distress, will you help them? We all like to consider ourselves to be good people, but when we’re caught in the moment, we freeze. What is the bystander effect? For more than 50 years, psychologists have observed this phenomenon again and again in experiments and in real life. The research overwhelmingly shows the more people that are present when there’s an emergency, the less likely they are to help.