Financial Literacy: What's the Point? From taking out loans to pay for higher education to investing for retirement, Americans are shouldering enormous levels of personal financial responsibility—more so than ever before. 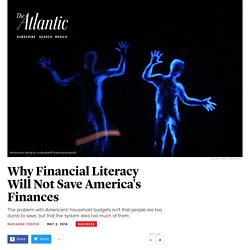 At the same time, financial products have both proliferated and become much more complex. Americans now face an Alphabet (and Numbers) soup of saving and investment options (401(k)s, 529s) and a head spinning array of credit options (credit cards, mortgages, home-equity loans). While Americans are not expected to manage their own legal cases or medical conditions, they are expected to manage their own finances. Sex ed is required. Why isn't financial education? My parents opted me out. 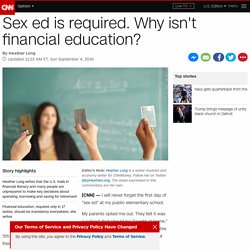 They felt it was a subject that should be "taught at home. " I was the only child opted out of the entire 5th grade. The teachers sent me to the playground, a very boring place without friends. That was 1994. By then, most of America had accepted that public schools would -- and should -- teach children about the birds and bees.

I learned a lot about condoms, STDs and intercourse from school (my parents stopped opting me out eventually). While sexual education is mainstream in K-12 schools, financial education is not. Americans are stumped by the simplest financial questions. And then we wonder why so many Americans have serious money issues. The American Dream isn't possible without understanding how to save, invest and use debt wisely. The reason why this is a huge problem is because America places almost the entire burden of life's biggest financial decisions on the shoulders of individuals. 10-warren-buffett-quotes-that-teach-us-about-inves. Financial illiteracy may have cost investors $200 billion over 20 years.

Back in the day, I used to believe individual investors could manage their own money and even sometimes beat the pros at their own game. 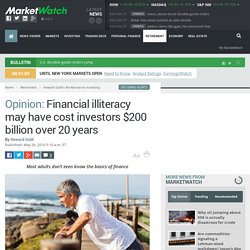 But after years of watching them make every mistake in the book, I don’t think many investors know what they’re doing. Now it turns out there’s a reason for that: Many investors are financially illiterate. It’s not just the poor schlub who racks up massive credit-card debt, relies on payday loans and who can’t answer basic questions about finance; most investors can’t, either, and I use the word “investor” for anyone who’s putting money into retirement accounts, college-savings plans, etc. In fact, U.S. investors’ financial illiteracy may have cost them around $200 billion over the past two decades, based on data provided by a leading financial-services research firm. 36% of adults lack retirement savings, including many 65 or older. More than a third of American adults have no retirement savings, and 14% of those ages 65 and older also haven’t put money away yet, according to a new study. 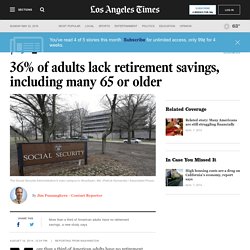 The low savings rate for people at or approaching retirement age is alarming, said Greg McBride, chief financial analyst for Bankrate.com, which conducted the survey. The results were released Monday. Uk.businessinsider. The Best Of Graham And Dodd's Security Analysis: Part IV. The Surprising Relevance of the Baltic Dry Index. On January 11th of this year, online financial circles lit up with dire news. 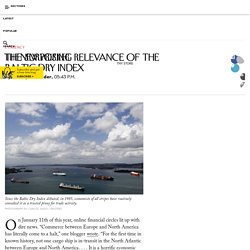 “Commerce between Europe and North America has literally come to a halt,” one blogger wrote. “For the first time in known history, not one cargo ship is in-transit in the North Atlantic between Europe and North America. . . . It is a horrific economic sign; proof that commerce is literally stopped.” What You Think You Know About Money, but Don’t, Can Hurt You. Photo Americans have grown more confident about their financial acumen since the market meltdown that ended in 2009. 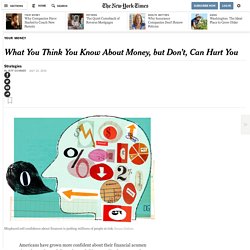 Yet they seem to know less about the subject than they did then. And most people didn’t even know much about it in 2009. These troubling conclusions arise from the latest data in a long-running study by the Finra Investment Education Foundation, which has been assessing Americans’ financial knowledge, attitudes and well-being for years. The “Financial Capability in the United States 2016” study is based on an online survey of more than 25,000 people. In fact, they suggest that misplaced self-confidence is putting millions of people at risk. Over all, the study found that most Americans have “relatively low levels of financial literacy.” Five of the questions have been on the quiz for years, making statistical comparisons possible.

The worst performance was on a question about how bond prices respond to rising interest rates. 3 guidelines to navigate the economic fog. Insights With investors facing a mixed economic outlook, Russ offers guidelines on what to keep an eye on and what to expect. 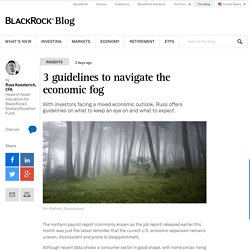 The nonfarm payroll report (commonly known as the job report) released earlier this month was just the latest reminder that the current U.S. economic expansion remains uneven, inconsistent and prone to disappointment. Although recent data shows a consumer sector in good shape, with home prices rising and household spending accelerating, a sharp deceleration in payroll growth calls into question the case for a consumer-led recovery.

Meanwhile, the manufacturing sector is still struggling with last year’s rapid rise in the U.S. dollar and the collapse in commodity prices. The Science Behind Why You Don’t Save (And What To Do About It) Businessinsider.