4 Ways Exxon Stopped Action on Climate Change. In the last few months, exposé after exposé has uncovered how Exxon knew about the dangerous reality of climate change before the media, politicians and just about everyone else. 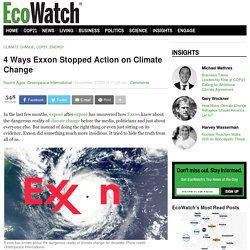 But instead of doing the right thing or even just sitting on its evidence, Exxon did something much more insidious. It tried to hide the truth from all of us. As we approach COP21, a global meeting to address the climate crisis, let’s take a look back on four examples of how far Exxon has gone to stop climate action: 1. That Time Exxon Learned in 1982 That Climate Change Would Lead to Environmental Catastrophe As early as 1977, Exxon’s own scientists were researching human-caused global warming. So Exxon knew. Now, the catastrophic events Exxon predicted are here. 2. Of course, Exxon isn’t alone in funding and spreading climate denialism. 3. For decades, Mobil—and then ExxonMobil—ran a weekly “advertorial” on the opinion page of the New York Times. The harm this caused to the planet is undeniable. 4. Exxon's climate lie: 'No corporation has ever done anything this big or bad'.

I’m well aware that with Paris looming it’s time to be hopeful, and I’m willing to try. 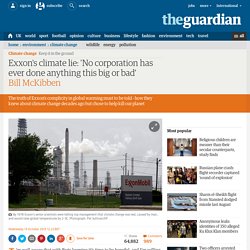 Even amid the record heat and flooding of the present, there are good signs for the future in the rising climate movement and the falling cost of solar. But before we get to past and present there’s some past to be reckoned with, and before we get to hope there’s some deep, blood-red anger. In the last three weeks, two separate teams of journalists — the Pulitzer-prize winning reporters at the website Inside Climate News and another crew composed of Los Angeles Times veterans and up-and-comers at the Columbia Journalism School — have begun publishing the results of a pair of independent investigations into ExxonMobil.

To be specific: But of course Exxon did dispute that fact. They helped organise campaigns designed to instil doubt, borrowing tactics and personnel from the tobacco industry’s similar fight. I’m aware that anger at this point does little good. Michael Mann: Exxon Doubled Down on Climate Denial and Deceit. Thanks to a months-long investigation by the Pulitzer-prize winning InsideClimate News, we learned last week that ExxonMobil’s own scientists had secretly confirmed the science behind human-caused climate change as early as the late 1970s. 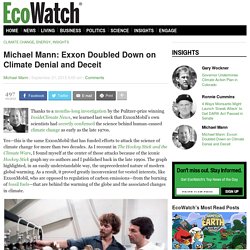 Yes—this is the same ExxonMobil that has funded efforts to attack the science of climate change for more than two decades. As I recount in The Hockey Stick and the Climate Wars, I found myself at the center of those attacks because of the iconic Hockey Stick graph my co-authors and I published back in the late 1990s. The graph highlighted, in an easily understandable way, the unprecedented nature of modern global warming. As a result, it proved greatly inconvenient for vested interests, like ExxonMobil, who are opposed to regulation of carbon emissions—from the burning of fossil fuels—that are behind the warming of the globe and the associated changes in climate. Pages: 1 • 2 • 3. Exxon Advertised Against Climate Change for Decades After Top Executives Knew Burning Fossil Fuels Would Warm the Planet.

This week, Inside Climate published some new revelations about one of the world’s biggest oil companies: that scientists working for Exxon knew about climate change as early as 1977. 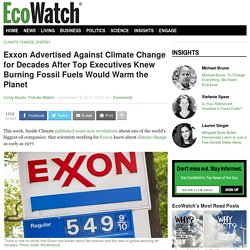 Exxon’s own scientists conducted an extensive research program on climate change and “The Greenhouse Effect,” running complex CO2 monitoring experiments and publishing peer-reviewed papers, because the company was deeply interested in this emerging threat to its core business, oil and ultimately the company’s survival. 10 Largest Companies 'Obstructing' Climate Policy. New research reveals that nearly half (45 percent) of the world’s 100 largest companies are “obstructing climate change legislation.” 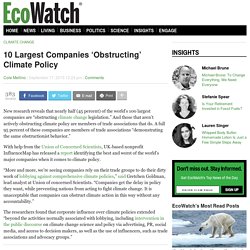 And those that aren’t actively obstructing climate policy are members of trade associations that do. A full 95 percent of these companies are members of trade associations “demonstrating the same obstructionist behavior.” With help from the Union of Concerned Scientists, UK-based nonprofit InfluenceMap has released a report identifying the best and worst of the world’s major companies when it comes to climate policy. “More and more, we’re seeing companies rely on their trade groups to do their dirty work of lobbying against comprehensive climate policies,” said Gretchen Goldman, lead analyst at Union of concerned Scientists. “Companies get the delay in policy they want, while preventing nations from acting to fight climate change.

The companies were graded on an A to F scale. Exxon Exposed for Spending Millions on Climate Change Denial. ExxonMobil spokesman Richard Keil told a carefully worded whopper last week. 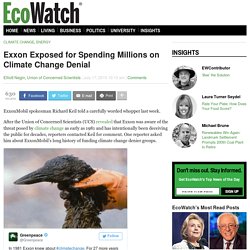 After the Union of Concerned Scientists (UCS) revealed that Exxon was aware of the threat posed by climate change as early as 1981 and has intentionally been deceiving the public for decades, reporters contacted Keil for comment. One reporter asked him about ExxonMobil’s long history of funding climate change denier groups. “I’m here to talk to you about the present,” Keil said. “We have been factoring the likelihood of some kind of carbon tax into our business planning since 2007. We do not fund or support those who deny the reality of climate change.” ExxonMobil no longer funds climate change deniers?! Technically, perhaps, because practically no one can say with a straight face that global warming isn’t happening anymore.

ExxonMobil is still funding those folks, big time. Keil said he wanted to talk about the present, so why don’t we? ExxonMobil Claimed it Stopped Funding Deniers Eight Years Ago.