Global Development Professionals Network. A shortage of bricks-and-mortar banks in India has forced the Reserve Bank of India (RBI) to redefine banking, with the central bank announcing it will offer licences to companies – from supermarket chains to real estate cooperatives – that are interested in opening their own bank. 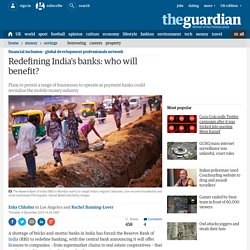 Under the guidelines issued last week, RBI wants payment banks to target India’s migrant labourers, low-income households and small businesses, offering savings accounts and remittance services with a low transaction cost. Designed to reach the 700 million unbanked Indians, any interested organisation must commit to setting up at least 25% of its physical access points in rural communities. This is an interesting development, considering that rural branches of Indian banks have declined from 54% of total branches in 1994 to 37% in 2013. “Today, place need not mean physical proximity, it can mean electronic proximity, or proximity via correspondents,” he said at a lecture in August in Mumbai. 9M Kenyans save Sh135 Billion through M-Shwari. Customers of mobile banking product M-Shwari have saved Sh135 billion since it was launched two years ago. 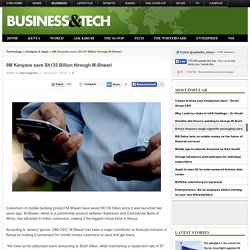 M-Shwari, which is a partnership product between Safaricom and Commercial Bank of Africa, has attracted 9 million customers, making it the biggest virtual bank in Kenya. According to Jeremy Igunze, CBA CEO, M-Shwari has been a major contributor to financial inclusion in Kenya by making it convenient for mobile money customers to save and get loans. “We have so far disbursed loans amounting to Sh24 billion, while maintaining a repayment rate of 97 percent which is by far more impressive than the repayment rates for loans advanced by commercial banks,” said Igunze. Payment banks: How it is possible to build a business around financial inclusion - The Economic Times. Dattaram, 50, earns Rs 9,000 a month doing domestic chores in three to four homes in a Mumbai neighbourhood. 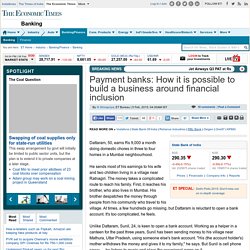 He sends most of his earnings to his wife and two children living in a village near Ratnagiri. The money takes a complicated route to reach his family. First, it reaches his brother, who also lives in Mumbai. His brother despatches the money through people from his community who travel to his village. At times, a few hundreds go missing, but Dattaram is reluctant to open a bank account. Unlike Dattaram, Sunil, 24, is keen to open a bank account. The 40-plus applicants for RBI's payments bank licence will look to unbanked people like Sunil as low-hanging fruit to harvest as their first customers. The applicants, who include telecom companies, retailers, mobile wallet providers, large business houses and several others, are betting that the country's huge unbanked population will take to payments banks just as they took to cell phones. 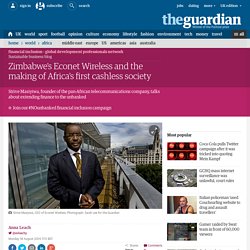 Telecommunications company, and now mobile banking service, Econet Wireless predicts that in less than 12 months notes and coins will be long-gone from this southern African country. “We do not expect anyone to still be using paper money in a year’s time,” the company’s CEO Douglas Mboweni recently said. “It will be just like Europe or America, where you no longer see people carrying bundles of cash.” The collapse of Zimbabwe’s economy in 2002 paved the way for Econet Wireless’s mobile payment system. “Hyperinflation had destroyed people’s confidence in financial institutions,” said the Zimbabwe company’s founder, Strive Masiyiwa, at the Mastercard Foundation Symposium on Financial Inclusion in July. “The lowest denomination circulating was $1,” Masiyiwa said. Masiyiwa was born in Zimbabawe (then Rhodesia) in 1961.

Econet Wireless was established in 1998, but not before a fight. Read more stories like this: Microfinance innovations in Zimbabwe. How Was mBanking Successfully Embraced in Bangladesh? Bringing mBanking to Bangladesh has had many bumps along the road. 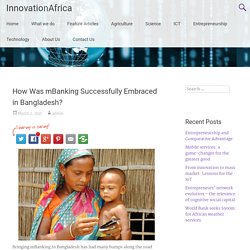 Before introducing mBanking to Bangladesh, 87% of the population didn’t have a bank account even though many individuals were subscribed to a mobile device. These statistics represented a huge untapped market for commercial banks. Several years back, establishing bank branches across rural area was not an easy option because of the costs and regulatory constraints the central bank (Bangladesh Bank) only granted maximum of 15 new branch-opening licenses each year.

To address the issue, the country inaugurated mBanking services in 2011. Dutch Bangla Bank Limited (DBBL) and “BRAC Bank Limited” (bKash), enabled millions of banked and unbanked people for different financial services. There was no need to have an Internet connection to register the mobile number with national ID & user photo to any service provider agent. Now in 2015, 19 banks provide mBanking services. Existing mBanking Service Conclusion Go to Source.