Financial market (Wikipedia) In economics, typically, the term market means the aggregate of possible buyers and sellers of a certain good or service and the transactions between them. 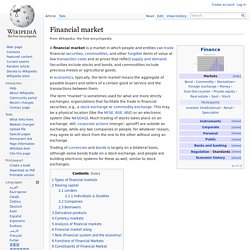 The term "market" is sometimes used for what are more strictly exchanges, organizations that facilitate the trade in financial securities, e.g., a stock exchange or commodity exchange. This may be a physical location (like the NYSE, BSE, NSE) or an electronic system (like NASDAQ). Much trading of stocks takes place on an exchange; still, corporate actions (merger, spinoff) are outside an exchange, while any two companies or people, for whatever reason, may agree to sell stock from the one to the other without using an exchange. Trading of currencies and bonds is largely on a bilateral basis, although some bonds trade on a stock exchange, and people are building electronic systems for these as well, similar to stock exchanges.

Derivative (finance) Many money managers use derivatives for a variety of purposes, such as hedging — by taking a position in a derivative, losses on portfolio holdings may be minimized or offset by profits on the derivative. 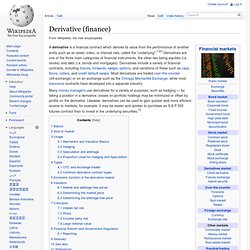 Likewise, derivatives can be used to gain quicker and more efficient access to markets; for example, it may be easier and quicker to purchase an S & P 500 futures contract than to invest in the underlying securities.[3] Derivatives are a contract between two parties that specify conditions (especially the dates, resulting values and definitions of the underlying variables, the parties' contractual obligations, and the notional amount) under which payments are to be made between the parties.[4][5] The most common underlying assets include commodities, stocks, bonds, interest rates and currencies, but they can also be other derivatives, which adds another layer of complexity to proper valuation.

Still, even these scaled down figures represent huge amounts of money. Futures contract. Forward contract. In finance, a forward contract or simply a forward is a non-standardized contract between two parties to buy or to sell an asset at a specified future time at a price agreed upon today.[1] This is in contrast to a spot contract, which is an agreement to buy or sell an asset today. Swap (finance) Swaps were first introduced to the public in 1981 when IBM and the World Bank entered into a swap agreement.[2] Today, swaps are among the most heavily traded financial contracts in the world: the total amount of interest rates and currency swaps outstanding is more thаn $348 trillion in 2010, according to Bank for International Settlements (BIS). 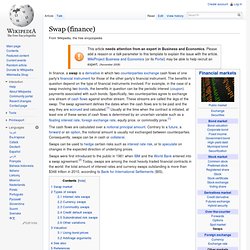 The Bank for International Settlements (BIS) publishes statistics on the notional amounts outstanding in the OTC derivatives market. At the end of 2006, this was USD 415.2 trillion, more than 8.5 times the 2006 gross world product. However, since the cash flow generated by a swap is equal to an interest rate times that notional amount, the cash flow generated from swaps is a substantial fraction of but much less than the gross world product—which is also a cash-flow measure. The majority of this (USD 292.0 trillion) was due to interest rate swaps. These split by currency as:

Security (finance) A security is a tradable asset of any kind.[1] Securities are broadly categorized into: The company or other entity issuing the security is called the issuer. A country's regulatory structure determines what qualifies as a security. For example, private investment pools may have some features of securities, but they may not be registered or regulated as such if they meet various restrictions. Securities may be classified according to many categories or classification systems: Securities are the traditional way that commercial enterprises raise new capital.

Investors in securities may be retail, i.e. members of the public investing other than by way of business. Corporate bonds represent the debt of commercial or industrial entities. Euro debt securities are securities issued internationally outside their domestic market in a denomination different from that of the issuer's domicile. Hybrid securities combine some of the characteristics of both debt and equity securities. Stock. For "capital stock" in the sense of the fixed input of a production function, see Physical capital. 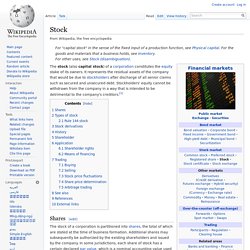 For the goods and materials that a business holds, see Inventory. Shares[edit] IBEX 35 highest dividend yielding stocks. Debt. A debt is an obligation owed by one party (the debtor) to a second party, the creditor; usually this refers to assets granted by the creditor to the debtor, but the term can also be used metaphorically to cover moral obligations and other interactions not based on economic value. 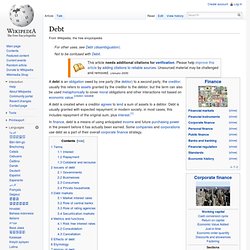 [citation needed] A debt is created when a creditor agrees to lend a sum of assets to a debtor. Debt is usually granted with expected repayment; in modern society, in most cases, this includes repayment of the original sum, plus interest.[1] In finance, debt is a means of using anticipated income and future purchasing power in the present before it has actually been earned. Some companies and corporations use debt as a part of their overall corporate finance strategy. Terms[edit]