Europe After the Greek Debt Crisis. A Hard Landing in China Could 'Shake the World' China's slowdown is already playing out across the world, dragging down commodity prices and weighing on trade partners. 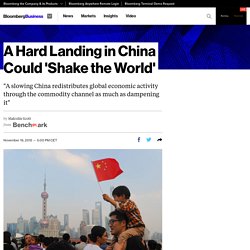 And that's while the economy is still growing at about 7 percent. So imagine what happens in a hard-landing scenario. Is the Euro Membership Preventing Finland from Thriving? Ukraine’s invasion and its effect on gold. Back in late March 2014 there was a push for the major banks and construction companies in Russia to delist on the (LSE) London Stock Exchange with the final large bank, Russian Standard Bank, being delisted on Nov. 21. 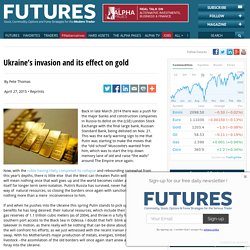 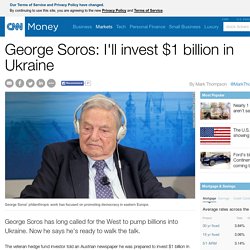 "There are concrete investment ideas, for example in agriculture and infrastructure projects. I would put in $1 billion," he told Der Standard. "This must generate a profit. My foundation would benefit from this, not me personally. " Greece is more useful to Russia inside the EU than out. With Gideon Rachman Gideon Rachman is away until September 1st, working on a special project. 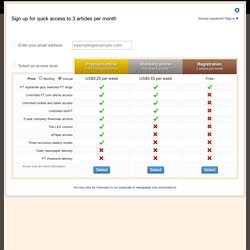 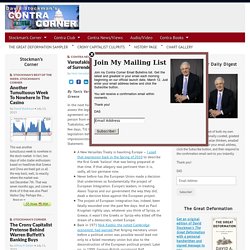 Why BRICS trade in local currency doesn’t work for India. The BRICS countries are keen to start using their local currencies for mutual settlements. 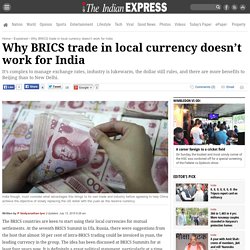 At the seventh BRICS Summit in Ufa, Russia, there were suggestions from the host that almost 50 per cent of intra-BRICS trading could be invoiced in yuan, the leading currency in the group. The idea has been discussed at BRICS Summits for at least four years now. It is definitely a great political statement, particularly at a time when the Bretton Woods institutions — International Monetary Fund (IMF, or just the ‘Fund’) and International Bank for Reconstruction and Development (World Bank, or just the ‘Bank’) — have failed to react to the increasingly louder voices of developing countries in a rapidly changing global economic order. Germany won’t spare Greek pain – it has an interest in breaking us. Greece’s financial drama has dominated the headlines for five years for one reason: the stubborn refusal of our creditors to offer essential debt relief. 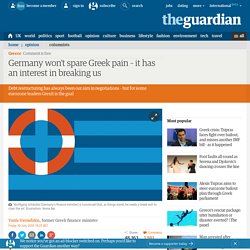 Why, against common sense, against the IMF’s verdict and against the everyday practices of bankers facing stressed debtors, do they resist a debt restructure? The answer cannot be found in economics because it resides deep in Europe’s labyrinthine politics. In 2010, the Greek state became insolvent. Two options consistent with continuing membership of the eurozone presented themselves: the sensible one, that any decent banker would recommend – restructuring the debt and reforming the economy; and the toxic option – extending new loans to a bankrupt entity while pretending that it remains solvent.

Official Europe chose the second option, putting the bailing out of French and German banks exposed to Greek public debt above Greece’s socioeconomic viability. China and Russia Lay Foundation for Massive Economic Cooperation. In the past decade, Beijing and Moscow have been more competitors than partners. 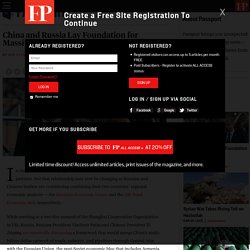 But that relationship may now be changing as Russian and Chinese leaders are considering combining their two countries’ regional economic projects — the Eurasian Economic Union and the Silk Road Economic Belt, respectively. While meeting at a two-day summit of the Shanghai Cooperation Organization in Ufa, Russia, Russian President Vladimir Putin and Chinese President Xi Jinping are reportedly discussing a framework that would merge China’s multi-billion dollar network of roads, railways, and pipelines through Central Asia with the Eurasian Union, the post-Soviet economic bloc that includes Armenia, Belarus, Kazakhstan, Kyrgyzstan, and Russia. The two projects would be combined under the auspices of the Shanghai Cooperation Organization, and if the proposal is completed, it would make the opaque organization the preeminent economic body from Shanghai to St. Petersburg. Germany failed to learn from its own history — and now Greece is paying the price - Business Insider.

Will the U.S. Wage War Against Russia? Russia’s Finances Are Not as Vulnerable as They Appear. Though the country still faces difficult economic conditions, the problem of external debt has been exaggerated. 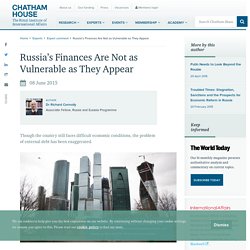 A large volume of scheduled external debt repayments has led to speculation that Russia could experience a financial crisis in the near future. However, these financial vulnerabilities are not as worrying to Russian policy-makers as they might appear. A significant share of Russia’s external debt is owed not to Western banks, but instead to other Russian parent or holding companies registered abroad. Bond Markets Herald an End to Cheap Government Debt. Bond markets got choppy at the end of April, when institutional investors began lining up to bet against the market. 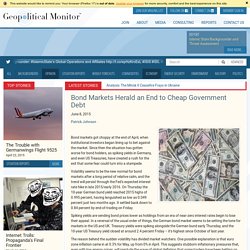 Since then the situation has gotten worse for bond holders, as spiking yields in Germany, and even US Treasuries, have created a rush for the exit that some fear could turn into a stampede. Volatility seems to be the new normal for bond markets after a long period of relative calm, and the trend will persist through the Fed’s expected interest rate hike in late 2015/early 2016. On Thursday the 10-year German bund yield reached 2015 highs of 0.995 percent, having languished as low as 0.049 percent just two months ago. China’s defence against supply chain disruption. Swift Sanctions. With the potential unraveling of the second ceasefire agreement between Ukraine and Russian-backed separatists, U.S. and EU policymakers are searching for new ways to convince Russia to cease its destabilizing activities in the former Soviet Republic.

While in recent weeks the focus has been on providing the Ukrainian military with lethal aid, analysts are now considering more powerful economic sanctions as a way to punish Moscow and deter it from continuing its support of the Ukrainian rebels. One such idea gaining traction is to cut Russian financial institutions off from the Society for Worldwide Interbank Financial Telecommunication, or SWIFT. As noted by Fareed Zakaria in a recent Washington Post op-ed, severing Russian banks’ connection to SWIFT, a European organization that facilitates global interconnection of financial institutions by providing standardized means of communicating financial information, would seriously damage the Russian economy.

Punishing Russia. Sensible Sanctions Using Financial Penalties the Right Way. The United States has used economic sanctions to address a wide range of undesirable activities, from Russian aggression in Ukraine, to human rights abuses in Syria, to cyberattacks from China and North Korea. Recently, U.S. President Barack Obama is employing sanctions for a new purpose: to deter international aggression and uphold international norms. Such sanctions allow Obama to take nonmilitary action in cases where the costs of using force are too high but a strong response is required. Yet while these tools may deter aggressive actions in certain circumstances, they may actually encourage bad behavior by signaling to international aggressors that the United States is unwilling to use military force to prevent those countries from threatening U.S. interests.

Only one country with global strategy - Business Insider. Protecting America's Competitive Advantage. Two months from now, the U.S. Congress may shutter a government agency that, in the past six years, has supported more than 1.3 million American jobs and generated more than $2 billion in deficit-reducing profits. The Export-Import Bank of the United States empowers American exporters by equipping those that cannot access private financing with credit insurance and working capital, among other tools.

Franklin Templton is one of them. The investment group snapped up Ukrainian international debt with a face value of almost $5 billion at the end of August, nearly a fifth of the country's outstanding international government bonds. Rothschild looks to organize Ukraine bondholders ahead of talks. Forget Tanks. Russia’s Ruble Is Conquering Eastern Ukraine. Russia's economy: In better shape than you might think. Russia Rebounds, Despite Sanctions. Sanctions meant to punish Russia for snatching Crimea from Ukraine one year ago were supposed to hurt Russian business. Stopping a Russian bond invasion. All it took was 11 days — and one schtum Kremlin spokesman — to make people wonder recently just how strong and secure a ruler Vladimir Putin really is.

Ukraine Debt Rating Now Super-Duper Junk. The world's economic center is quickly moving to China. China Challenges Dollar Hegemony With New Infrastructure Bank. Here’s one reason Vladimir Putin may be smiling. U.S. Hegemony and Dollar Threatened By New Chinese Bank. Backgrounder: China’s Asian Infrastructure Investment Bank - Geopoliticalmonitor.com. The West’s Tricky Economic War With Russia. Was The Price Of Ukraine's "Liberation" The Handover Of Its Gold To The Fed? De-Dollarization Continues As Russia Seeks AIIB Membership. All of the countries joining China’s alternative to the World Bank. China emerges as winner over U.S. in creation of Asian infrastructure bank. Which Countries Control The Global Stock Market? Chinese Cash Versus American Might. Time for Russia & Vietnam to think of switching to local currencies – Medvedev — RT Business. Larry Summers: U.S. must wake up to the ‘new economic era’ Here is what you need to know about Putin's meeting with Tsipras — RT Business.