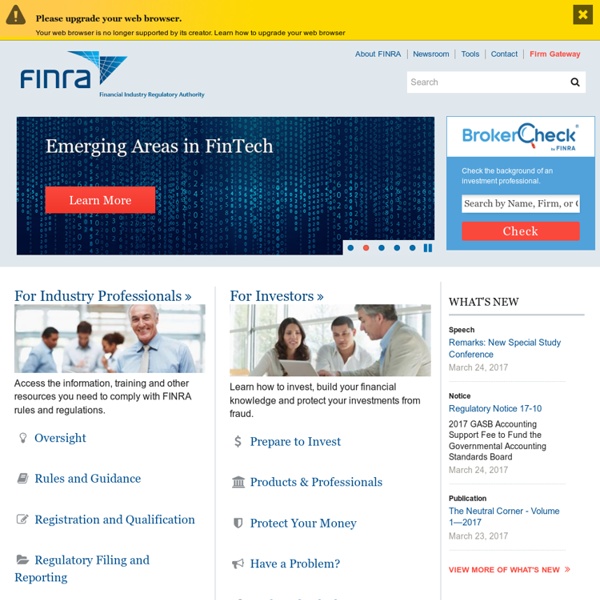 Forex Trading: A Beginner's Guide Forex is short for foreign exchange, but the actual asset class we are referring to is currencies. Foreign exchange is the act of changing one country's currency into another country's currency for a variety of reasons, usually for tourism or commerce. Due to the fact that business is global there is a need to transact with most other countries in their own particular currency.

Education “If you don’t know where you are going, any road will get you there.” — Lewis Carroll Daktori’s first goal is to help doctors see a path to a more financially rewarding future in medicine. We offer a wide range of education and training aids as part of our Financial Fellowship Program. Broker-Dealers: Why They Ask for Personal Information Brokers generally request personal information from their customers, including financial and tax identification information, to comply with U.S. government laws and rules, as well as rules imposed by self-regulatory organizations (SROs). Brokers request personal information from new customers as well as from customers who have had long-standing relationships with their firms. Here are some of the reasons why brokers need to gather this information: Under SRO rules, when a broker recommends that a customer buy or sell a particular security, the broker must have a reasonable basis for believing that the recommendation is suitable for that customer. In making this assessment, the broker must consider the customer’s risk tolerance, other security holdings, financial situation (income and net worth), financial needs, and investment objectives. Information on FINRA’s suitability rule, along with links to other materials concerning suitability, may be found in the FINRA Manual.

Terms & Conditions - tradorax - Binary Options These Terms of Use govern the Client’s use of the Company Internet Website and all applications, software and Services (collectively, “The Services”) available via this Website. Use of the Website By accessing this Website, the client signifies his agreement with and understanding of the following Terms of Use. The client warrants and represents to the Company that he is legally entitled to visit the Website and make use of information made available via the Website. The Company reserves the right at its sole discretion to change, modify, add, or remove any portion of this Website or these Terms of Use at any time and for any reason without a notice to the client. Changes to these Terms of Use will be effective when posted. Continued use of this Website following any such changes shall constitute the client’s acceptance of such changes.

20 Things the Rich Do Every Day So what do the rich do every day that the poor don’t do? Tom Corley, on his website RichHabitsInstitute.com, outlines a few of the differences between the habits of the rich and the poor. 1. 70% of wealthy eat less than 300 junk food calories per day. 97% of poor people eat more than 300 junk food calories per day. 23% of wealthy gamble. 52% of poor people gamble. 2. 80% of wealthy are focused on accomplishing some single goal. Only 12% of the poor do this. 3. 76% of wealthy exercise aerobically four days a week. 23% of poor do this.

Jumpstart Our Business Startups Act The Jumpstart Our Business Startups Act or JOBS Act, is a law intended to encourage funding of United States small businesses by easing various securities regulations. It passed with bipartisan support, and was signed into law by President Barack Obama on April 5, 2012. The term "The JOBS Act" is also sometimes used informally to refer to just Titles II and III of the legislation (an example is here), which are the two most important pieces to much of the crowdfunding and startup community. Title II went into effect on September 23, 2013.[1] Title III is still pending.

10 tips for beginner investors If you are frustrated by pitiful returns on your savings accounts, it might be time to make your first foray into the stockmarket. 1. Investing isn't just for high rollers You don't have to have Warren Buffett's bank balance to dabble on the stockmarket. Most investment funds will accept monthly deposits of £50 or lump sums of between £500 and £1,000. Invest wisely - Ready to start saving money? Here's how to do it right - Money Magazine When you're young, go Roth Vanguard reports that more than half of 401(k) retirement plans it administers now offer a Roth option. Instead of getting a tax break when you put the money aside, as in most 401(k)s, savers in Roth plans get totally tax-free withdrawals in retirement. "If you're not yet in a high income tax bracket, the value of the upfront tax break isn't as important," says financial planner Michael Kitces. "Use those years to build tax-free retirement funds." Don't miss out by default Many employers make it easy to start 401(k) saving by signing up employees automatically. Yet according to Vanguard, a large administrator of 401(k)s, 88% their clients' plans set the default below the 6% you usually need to get the largest company match.

Budgeting 101: A Guide to Keeping Track of Your Finances - Part 2 Do you ever get to the end of the month and wonder what’s happened to all of your money? You can’t remember what you spent it on or how much was actually spent. You need to have a plan with your money – that’s where budgeting comes in. It can help you figure out what you should be spending each month and will then prompt you to keep track of your spending habits. It can seem a little overwhelming at first, but there are a few simple steps you can take to get your budget up and running.

Financial Stability Oversight Council The Financial Stability Oversight Council ( FSOC ) is a United States federal government organization, established by Title I of the Dodd–Frank Wall Street Reform and Consumer Protection Act , which was signed into law by President Barack Obama on July 21, 2010. [ 1 ] The Dodd-Frank Act provides the Council with broad authorities to identify and monitor excessive risks to the U.S. financial system arising from the distress or failure of large, interconnected bank holding companies or non-bank financial companies , or from risks that could arise outside the financial system; to eliminate expectations that any American financial firm is " too big to fail "; and to respond to emerging threats to U.S. financial stability. The Act also designates the Secretary of the Treasury as Chairperson. Inherent to the FSOC's role as a consultative council is facilitation of communication among financial regulators.

Economist Jokes I believe that even Adam Smith would enjoy these jokes. JokEc is a collection of professional humor for the benefit of economists as well as non-economists.1st WWW-edition 24/10/1994 (d/m/y) Update 16/04/2001 Part of the NetEc group since 27/3/1997Before the 2nd Millennia ended, JokEc had existed for over five years and had some 450,000 hits!Use the find function for searching. Progress Continues in Trans-Pacific Partnership Talks September 15, 2012 Leesburg, Virginia – Trans-Pacific Partnership (TPP) negotiators have continued to make progress at the 14th round of negotiations, which ended today in Leesburg, Virginia. Responding to direction in the September 9th statement of TPP Leaders issued at Vladivostok, Russia, negotiators in Leesburg focused on resolving outstanding issues where possible and narrowing differences on those that still need work. Over the 10-day negotiating round, negotiators from the United States and the other eight TPP countries – Australia, Brunei Darussalam, Chile, Malaysia, New Zealand, Peru, Singapore and Vietnam – advanced their efforts to reach agreement on the texts of the 29 chapters of the agreement. The teams were pleased with progress made on a wide range of chapters, including market access, customs, rules of origin, technical barriers to trade, sanitary and phytosanitary standards, cross border services, telecommunications, government procurement, and others.

Trans-Pacific Partnership (TPP): 14th Round of TPP Negotiations Set for Leesburg, Virginia TPP Leaders at the APEC Summit in Japan, 2010, photo credit to Gobierno de Chile STATEMENT OF THE MINISTERS AND HEADS OF DELEGATION FOR THE TRANS-PACIFIC PARTNERSHIP COUNTRIESDecember 10, 2013|Singapore We, the Ministers and Heads of Delegation for Australia, Brunei Darussalam, Canada, Chile, Japan, Malaysia, Mexico, New Zealand, Peru, Singapore, the United States, and Vietnam, have just completed a four-day Ministerial meeting in Singapore where we have made substantial progress toward completing the Trans-Pacific Partnership agreement.