At least two dead after floods hit vast area of western Canada. Officials in Calgary say that up to 100,000 thousand people could have to leave their homes because of severe flooding in western Canada. 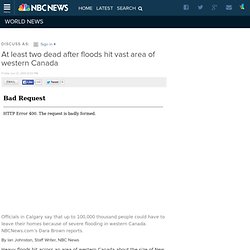 NBCNews.com's Dara Brown reports. By Ian Johnston, Staff Writer, NBC News Heavy floods hit across an area of western Canada about the size of New York state on Friday, leaving at least two people dead and forcing 100,000 to evacuate. As many as four people may have died after being swept away in Alberta, according to the Royal Canadian Mountain Police. The RCMP said the bodies of two men were recovered from the Highwood River near the flood-swept community of High River, CBC reported. A woman pulled by currents in her camper has not been located, STARS air ambulance spokesman Cam Heke told The Associated Press. The Bow River, which runs through Calgary, a city of more than 1 million people, crested at more than five times its normal flow for this time of year, Reuters reported. Russia Warns Obama: Global War Over “Bee Apocalypse” Coming Soon. 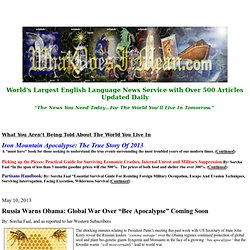 " What You Aren’t Being Told About The World You Live In Apocalypse: The True Story Of 2013 A “must have” book for those seeking to understand the true events surrounding the most troubled years of our modern times. Earth Tomorrow. “It is important to know more about the Earth and how we can make it a better place for ourselves and generations to come.” 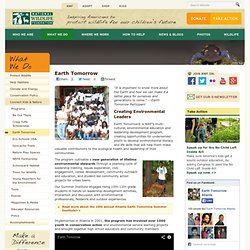 Our Summer Institute engages rising 10th-12th grade students in hands-on leadership development activities, interaction and discussion with environmental professionals, fieldwork and outdoor experiences. Related Resources: Factory Farms: Get the Facts & Take Action. Green Bride Guide. NRDC Flix. Science So What. The Technology Alterrus. Bay Area Permaculture. Open Atrium. Open Atrium is an intranet in a box that has group spaces to allow different teams to have their own conversations and collaboration. Open Atrium 2.x for Drupal 7 A new architecture for Drupal 7 that is built upon Panopoly and intended as an extensible collaboration framework. Adds the ability to have private "sections" within a collaboration space with granular access control. Drag/drop layout control with dozens of widgets that can be placed on dashboards and landing pages.

Comes with Discussions, Events, Issue tracking, and Document Wiki out of the box, along with the dashboards to manage it all. Collabtive - Open Source Collaboration. Our.windowfarms.org. FROGBOX. UsedCardboardBoxes.com. Quality Used Moving Boxes for Sale - Cheap. Green. Guaranteed. Foundups Michael Trout. Sorry for the abrupt ending... battery died :( please support my ad free videos and bee conservation work at Water not flowers is most important to bees. 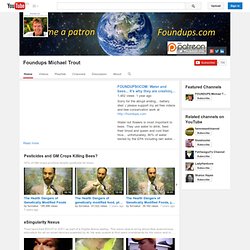 They use water to drink, feed their brood and queen and cool their hive... unfortunately, 90% of water tested by the EPA including rain water now have harmful pesticides in it. This toxicity is what is causing bees to collapse. What people fail to realized is that only 0.07% of fresh water on the planet is available to us and 70% of that is being contaminated by agro-chemicals like toxic GMO cops and from systemic pesticides... another 20% is being contaminated by industry... such as fracking and the refining of oils and other materials. We are poisoning is the US alone about the size of western Europe with toxic GM crops and systemic pesticides and as a result the bees and their fellow beneficial insects are suffering. Ground breaking tech. Environmental Law and Policy Center. Focusing On The Things That Matter. Michigan Woman Faces 93 Days in Jail for Planting a Vegetable Garden. Photo Credit: Julie BassUPDATE: Charges have been dropped by the city of Oak Park. 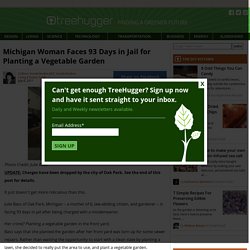 See the end of this post for details. It just doesn't get more ridiculous than this. Julie Bass of Oak Park, Michigan -- a mother of 6, law-abiding citizen, and gardener -- is facing 93 days in jail after being charged with a misdemeanor. Her crime? Planting a vegetable garden in the front yard.Bass says that she planted the garden after her front yard was torn up for some sewer repairs. Her garden consists of 5 raised beds, where she grows a mix of squashes, corn, tomatoes, flowers, and other veggies. About the City Ordinance Supposedly, Bass is in noncompliance with a city ordinance that states that only "suitable" plant material is allowed on the lawn area of residences.