Finding a Book When You've Forgotten Its Title. Make 2020 your best reading year yet. 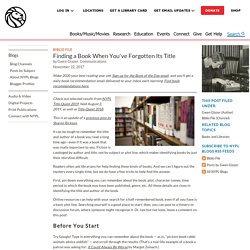 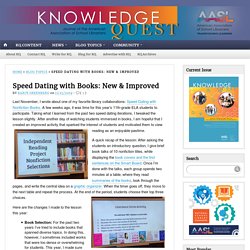 A few weeks ago, it was time for this year’s 11th-grade ELA students to participate. Taking what I learned from the past two speed dating iterations, I tweaked the lesson slightly. After another day of watching students immersed in books, I am hopeful that I created an improved activity that sparked the interest of students and motivated them to view reading as an enjoyable pastime. A quick recap of the lesson: After asking the students an introductory question, I give brief book talks of 10 nonfiction titles, while displaying the book covers and the first sentences on the Smart Board.

Teen Librarian Toolbox — @TLT16 Professional development for teen librarians. Harry Potter banned: Nashville Catholic school bans "Harry Potter" book series, citing risk of "conjuring evil spirits" A Catholic school in Nashville, Tennessee has banned the "Harry Potter" series because a reverend at the school claims the books include both good and evil magic, as well as spells, which, if read by a human can conjure "evil spirits," according to the Tennessean. 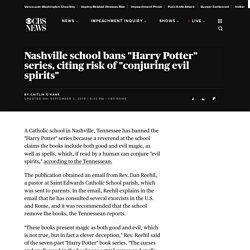 The publication obtained an email from Rev. Dan Reehil, a pastor at Saint Edwards Catholic School parish, which was sent to parents. In the email, Reehil explains in the email that he has consulted several exorcists in the U.S. and Rome, and it was recommended that the school remove the books, the Tennessean reports. "These books present magic as both good and evil, which is not true, but in fact a clever deception," Rev. Reehil said of the seven-part "Harry Potter" book series.

CBS News has reached out to the school district for comment. 5 Of The Best Children's Books About Disabilities And Inclusion. Did you know that more than 12% of the U.S. population has a disability? While its not always easy to explain disability to children, books have a way of illustrating what really matters, and bringing it to their level. They’re also a great way to start conversations about disability, inclusion, and advocacy. Here are some books to start those conversations, whether your child is a toddler or reading middle grade. 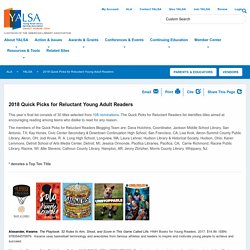 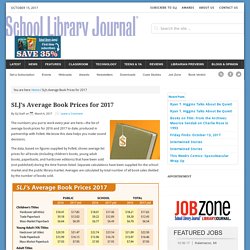 We know this data helps you make sound decisions. The data, based on figures supplied by Follett, shows average list prices for all books (including children’s books, young adult books, paperbacks, and hardcover editions) that have been sold (not published) during the time frames listed. Separate calculations have been supplied for the school market and the public library market. Averages are calculated by total number of all book sales divided by the number of books sold. Look for the next iteration in Spring of 2018. This article was featured in our free Extra Helping enewsletter. Teen Librarian Toolbox — @TLT16 Professional development for teen librarians. GUYS READ. 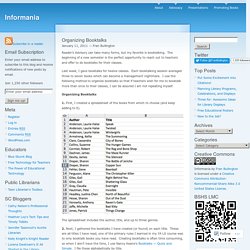 The beginning of a new semester is the perfect opportunity to reach out to teachers and offer to do booktalks for their classes. Last week, I gave booktalks for twelve classes. Each booktalking session averaged three to seven books which can become a management nightmare. I use the following method to organize booktalks so that if teachers wish for me to booktalk more than once to their classes, I can be assured I am not repeating myself. Organizing Booktalks 1. The spreadsheet includes the author, title, and up to three genres. 2. 3. I keep all of this information in my Booktalk Notebook that I keep for reference at the Circulation Desk. Giving the Booktalks. School Librarian's Role in Reading Toolkit.

Position Statement on the School Librarian's Role in Reading. Rationale: Reading is a foundational skill for 21st-century learners. 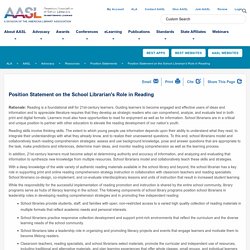 Guiding learners to become engaged and effective users of ideas and information and to appreciate literature requires that they develop as strategic readers who can comprehend, analyze, and evaluate text in both print and digital formats. Learners must also have opportunities to read for enjoyment as well as for information. School librarians are in a critical and unique position to partner with other educators to elevate the reading development of our nation’s youth. Reading skills involve thinking skills. Position Statement on the Value of Independent Reading in the School Library Program. The following position statement is currently under review to align with the National School Library Standards. 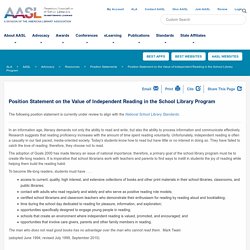 In an information age, literacy demands not only the ability to read and write, but also the ability to process information and communicate effectively. Research suggests that reading proficiency increases with the amount of time spent reading voluntarily. Unfortunately, independent reading is often a casualty in our fast paced, media-oriented society. Today's students know how to read but have little or no interest in doing so. They have failed to catch the love of reading; therefore, they choose not to read. The adoption of Goals 2000 has made literacy an issue of national importance; therefore, a primary goal of the school library program must be to create life-long readers.

To become life-long readers, students must have . . . The man who does not read good books has no advantage over the man who cannot read them. (adopted June 1994; revised July 1999, September 2010) Position Statement on Labeling Books with Reading Levels. The following position statement is currently under review to align with the National School Library Standards. 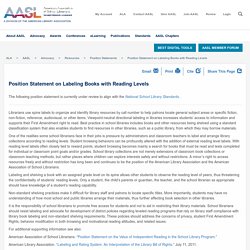 Librarians use spine labels to organize and identify library resources by call number to help patrons locate general subject areas or specific fiction, non-fiction, reference, audiovisual, or other items. Viewpoint-neutral directional labeling in libraries increases students’ access to information and supports their First Amendment right to read. Best practice in school libraries includes books and other resources being shelved using a standard classification system that also enables students to find resources in other libraries, such as a public library, from which they may borrow materials.

One of the realities some school librarians face in their jobs is pressure by administrators and classroom teachers to label and arrange library collections according to reading levels. For additional supporting information see also: American Association of School Librarians. Study: Teachers Value Independent Reading But Lack Class Time for It. Nearly all teachers and principals believe students should have time for independent reading at school, yet only about a third of teachers set aside time each day for this, according to a recent survey by Scholastic. 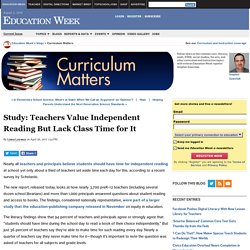 The new report, released today, looks at how nearly 3,700 preK-12 teachers (including several dozen school librarians) and more than 1,000 principals answered questions about student reading and access to books. The findings, considered nationally representative, were part of a larger study that the education-publishing company released in November on equity in education. The literacy findings show that 94 percent of teachers and principals agree or strongly agree that "students should have time during the school day to read a book of their choice independently. " But just 36 percent of teachers say they're able to make time for such reading every day. When independent reading occurs, students spend an average of 22 minutes on it. In School. Use the news to teach reading comprehension.

Allowing students to explore news articles that spark their curiosity can provide a bigger literacy boost than having them read nonfiction texts about random topics far removed from a youngster’s interests. At Lancaster Middle School near Buffalo, New York, students read news articles to help write stories for a classroom magazine and to prepare for debates in social studies. The Draw-a-Reader Test: Informal Assessment Supporting Teacher Inquiry. My department was trying to fill a position in science education and we were interviewing a candidate who had worked extensively with inner-city youth to support their interest in and confidence about science. The job candidate presented a fascinating Powerpoint presentation showing photographs of the summer workshops she facilitated in which girls and boys from economically disadvantaged homes gathered for six weeks in the summer to explore science. To measure the impact of the summer program on children's perceptions of what it meant to be a scientist, the facilitators asked students to take the Draw a Scientist Test (DAST) at the beginning and the end of their summer experience.

The DAST was designed "as an open-ended projective test to detect children's perceptions of scientists" (Nuno, 1998) by asking them to draw a picture of a scientist doing science. Other researchers used Chambers' data to develop a checklist of children's stereotypes about scientists (i.e. Next Steps. Knowledge Quest. I’ve Got Research. Yes, I Do. I’ve Got Research. How About You? In 1847, Hungarian doctor, Ignaz Semmelweis made a remarkable discovery. When doctors washed their hands in a solution of chlorine and water, childbirth fever rates at Vienna General Hospital dropped from 18% to near zero.

Offended that Semmelweis implied doctors were killing their own patients, the medical community rejected hand washing as an infection prevention measure, and drove Semmelweis out of medicine and into an insane asylum. A few years later, Louis Pasteur and Joseph Lister made scientific advances that reinforced Semmelwies’s claims about germ theory and infection. Hand washing between patient examinations is considered best practice today. In spite of all scientific evidence, we still live in a world where hand washing isn’t universal practice.