I Have a Dream speech by Martin Luther King .Jr HD (subtitled) J.K. Rowling Speaks at Harvard Commencement. The "Chosen Ones" Choose Themselves. In 1994, a young woman asked for an order of restraint against her husband and filed for divorce. 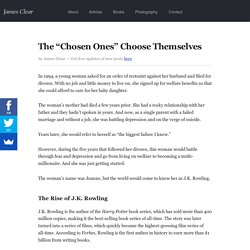 With no job and little money to live on, she signed up for welfare benefits so that she could afford to care for her baby daughter. The woman’s mother had died a few years prior. She had a rocky relationship with her father and they hadn’t spoken in years. And now, as a single parent with a failed marriage and without a job, she was battling depression and on the verge of suicide. Habits of Successful People: Start Before You Feel Ready.

In 1966, a dyslexic sixteen-year-old boy dropped out of school. 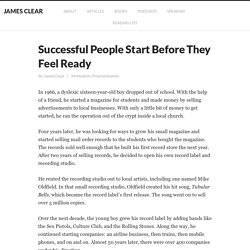 With the help of a friend, he started a magazine for students and made money by selling advertisements to local businesses. With only a little bit of money to get started, he ran the operation out of the crypt inside a local church. Four years later, he was looking for ways to grow his small magazine and started selling mail order records to the students who bought the magazine. The records sold well enough that he built his first record store the next year. After two years of selling records, he decided to open his own record label and recording studio.