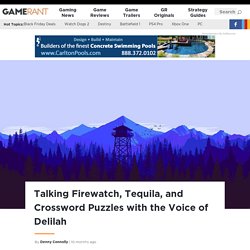 Firewatch is a game that is all about character, so obviously recruiting top tier voice talent was a major concern for Campo Santo. The game is all about firewatch volunteer Henry’s summer in the woods and his walkie-talkie conversations with his boss, Delilah, are the game’s driving force. The chemistry and tension between the Henry and Delilah are crucial to Firewatch’s success and luckily both the actors that Campo Santo recruited nailed their performances. The playable protagonist is voiced by Mad Men’s Rich Sommer and the female lead is performed by The Walking Dead’s Cissy Jones. AdventureX 2016 - Writing for Games (Panel) Untitled. The Witness has now been on sale for a week, so it seems like a good time to post a financial summary. 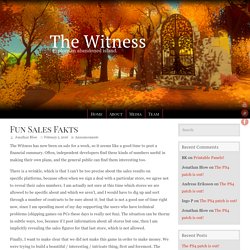 Often, independent developers find these kinds of numbers useful in making their own plans, and the general public can find them interesting too. There is a wrinkle, which is that I can’t be too precise about the sales results on specific platforms, because often when we sign a deal with a particular store, we agree not to reveal their sales numbers. I am actually not sure at this time which stores we are allowed to be specific about and which we aren’t, and I would have to dig up and sort through a number of contracts to be sure about it; but that is not a good use of time right now, since I am spending most of my day supporting the users who have technical problems (shipping games on PCs these days is really not fun). 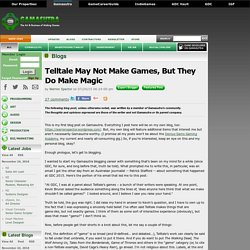 The thoughts and opinions expressed are those of the writer and not Gamasutra or its parent company. This is my first blog post on Gamasutra. Everything I post here will be on my own blog, too: But, my own blog will feature additional items that interest me but aren't necessarily Gamasutra-worthy. (I promise all my posts won't be about the Denius-Sams Gaming Academy, my current and nearly all-consuming gig.) Q&A: Turning a Telltale game into 'a Telltale experience' With multiple hit titles under its belt and four projects currently underway, The Walking Dead developer Telltale Games has become something of a powerhouse for story-rich adventure games. 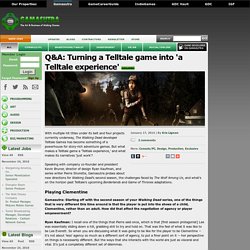 But what makes a Telltale game a 'Telltale experience,' and what makes its narratives 'just work'? Speaking with company co-founder and president Kevin Bruner, director of design Ryan Kaufman, and series writer Pierre Shorette, Gamasutra probes about new directions for Walking Dead's second season, the challenges faced by The Wolf Among Us, and what's on the horizon past Telltale's upcoming Borderlands and Game of Thrones adaptations. Gamasutra: Starting off with the second season of your Walking Dead series, one of the things that is very different this time around is that the player is put into the shoes of a child, Clementine, rather than an adult. How did that affect the negotiation of agency or player empowerment? Pierre Shorette: It's unique too. Telltale Games: Bringing Great Stories to Life. At 3PM on a Friday afternoon in a small conference room in Moscone West, in San Francisco, off a hallway shaded from the bustle of the Wondercon comics convention, Telltale CEO Dan Conners stands before a small crowd of journalists and comic fans in cheap suits and rickety chairs for his panel, named 'Telltale Games: Bringing Great Stories To Life'. 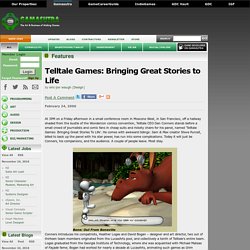 He comes with awkward tidings: Sam & Max creator Steve Purcell, billed to back up the panel with his star power, has run into some complications. Today it will just be Conners, his companions, and the audience. A couple of people leave. Most stay. Telltale Tells All (Pt. 1) - An Interview with Dave Grossman. Telltale Tells All (Pt. 1) - An Interview with Dave Grossman By Frank Cifaldi Dave Grossman is the Senior Designer at San Rafael, California-based Telltale Games, currently serving as Lead Designer on the upcoming Sam & Max: Season One, the license for which was recently acquired by Telltale after the IP's previous video game treatment, Sam & Max: Freelance Police, was cancelled by its publisher, LucasArts. 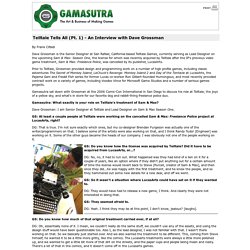 Josh Bycer's Blog - Tracing my Troubles with Telltale Games. The following blog post, unless otherwise noted, was written by a member of Gamasutra’s community. 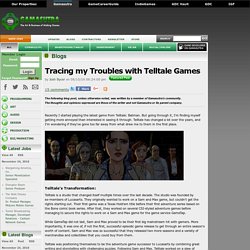 The thoughts and opinions expressed are those of the writer and not Gamasutra or its parent company. Recently I started playing the latest game from Telltale: Batman. But going through it, I'm finding myself getting more annoyed than interested in seeing it through. Telltale has changed a lot over the years, and I'm wondering if they've gone too far away from what drew me to them in the first place. Video: How Telltale adapted Fables into The Wolf Among Us. Telltale Games has made a name for itself as a creator of story-driven games based on established franchises, among them The Walking Dead, Game of Thrones and Tales from the Borderlands. 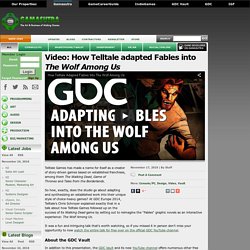 So how, exactly, does the studio go about adapting and synthesizing an established work into their unique style of choice-heavy games? At GDC Europe 2014, Telltale's Chris Schroyer explained exactly that in a talk about how Telltale Games followed up on the success of its Walking Dead game by setting out to reimagine the "Fables" graphic novels as an interactive experience: The Wolf Among Us. It was a fun and intriguing talk that's worth watching, so if you missed it in person don't miss your opportunity to now watch the entire talk for free over on the official GDC YouTube channel. Gamasutra and GDC are sibling organizations under parent UBM Tech. How is Telltale reinventing the Batman mythos with its new game series? Licensed games can be a tricky beast sometimes. 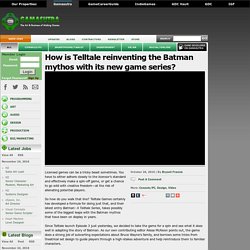 You have to either adhere closely to the licensor’s standard and effectively make a spin-off game, or get a chance to go wild with creative freedom—at the risk of alienating potential players. So how do you walk that line? Telltale Games certainly has developed a formula for doing just that, and their latest entry Batman: A Telltale Series, takes possibly some of the biggest leaps with the Batman mythos that have been on display in years. Since Telltale launch Episode 3 just yesterday, we decided to take the game for a spin and see what it does well in adapting the story of Batman. Video: How Telltale designs narrative-driven games. It's easy to talk about games as "narrative-driven" experiences, but much more challenging to actually design and create one that guides players through a good story while still affording them meaningful choices. 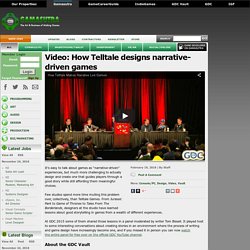 Few studios spend more time mulling this problem over, collectively, than Telltale Games. From Jurassic Park to Game of Thrones to Tales From The Borderlands, designers at the studio have learned lessons about good storytelling in games from a wealth of different experiences. Wes Platt's Blog - How to write an adventure game with just one ending. The following blog post, unless otherwise noted, was written by a member of Gamasutra’s community. The thoughts and opinions expressed are those of the writer and not Gamasutra or its parent company. No one makes you sort through inventory puzzles to make the chandelier fall during The Phantom of the Opera. You don’t have test your key-tapping skills to get to the helicopter scene in Miss Saigon. You’re not expected to defeat quick-time events to learn Willy Loman’s fate in Death of a Salesman.

These would just be distractions from the real experience. Knee Deep is more interactive than these remarkable shows, yet our game is inspired from such an intense focus on characters. Your blog posts, news articles, and investigative reports can draw a lot of hits or alienate people who might prove valuable assets in the long run. I’ve written a broad script that affords choice, but characters have marks they’re going to hit. In the first iteration, Act 1: Wonderland didn’t have just one ending. A guide to create the ideal adventure game - Feature - Adventure Classic Gaming - ACG - Adventure Games, Interactive Fiction Games - Reviews, Interviews, Features, Previews, Cheats, Galleries, Forums.

What is an ideal adventure game? The answer to this question has eluded adventure game designers, developers, and players. Many so-called adventure games of today have blurred the line that, in the past, has so clearly defined the adventure genre of yesteryear. Recently, I have taken an interest in the issue, mostly to see if it is possible to reestablish this missing line. The goal of this article is to outline the elements that I think are required to create the ideal adventure game. Although this topic is obviously very subjective, I hope to share with you something that I think you can at least accept as good guidelines for designing adventure games.

Dan Marshall's Blog - How to Design Brillo Point and Click Adventure Game Puzzles. The following blog post, unless otherwise noted, was written by a member of Gamasutra’s community. The thoughts and opinions expressed are those of the writer and not Gamasutra or its parent company. Hello! In The Games Of Madness: 4-Layers, A Narrative Design Approach. Introduction This blog post will be about a new way to approach narrative design in games - the 4 Layers Approach.

It is based on a GDC talk I gave in March this year. The approach is primarily meant to suggest a workflow that focuses on the story and makes sure the narrative and gameplay are connected. Astroblog. Traditional Adventure Games Are Rubbish. Seven Deadly Sins of Adventure Games. We know why adventure genre died, or, to be precise, when and how it committed suicide. But surely all the latest discoveries in design (the trinity of Presence, Immersion and Engagement, ludonarrative dissonance, PENS model, etc.) have shown adventure game creators the way, and modern point and clicks are much better than the old ones, right? Sadly, wrong. How to write... an Adventure game. How to make an Adventure Game. Gamedevelopment.tutsplus. Where Are the Funny Video Games? Can a Video Game Ever Be a True Comedy? Adventure Author context paper. Adventures in games research - Feature - Adventure Classic Gaming - ACG - Adventure Games, Interactive Fiction Games - Reviews, Interviews, Features, Previews, Cheats, Galleries, Forums.