What You Pawn I Will Redeem. Suddenly, a Knock on the Door. “Tell me a story,” the bearded man sitting on my living-room sofa commands. 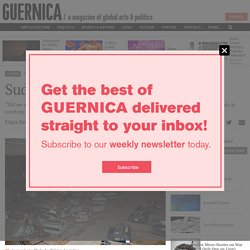 The situation, I must admit, is anything but pleasant. I’m someone who writes stories, not someone who tells them. And even that isn’t something I do on demand. The last time anyone asked me to tell him a story, it was my son. 10 Outstanding Short Stories to Read in 2018. For years, the #longreads hashtag on Twitter has been filled with great story recommendations from people around the world. 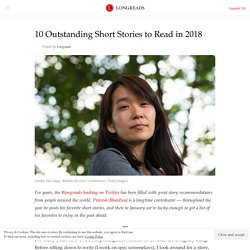 Pravesh Bhardwaj is a longtime contributor — throughout the year he posts his favorite short stories, and then in January we’re lucky enough to get a list of his favorites to enjoy in the year ahead. For many years now I’ve been posting short stories on Twitter. It’s a nightly thing: Before sitting down to write (I work on spec screenplays), I look around for a story, read it, then share it. I end up reading almost every day, irrespective of whether I am able to write something or not. Harrison. Contents of the Dead Man's Pockets. Contents of the Dead Man's Pockets Jack Finney At the little living-room desk Tom Benecke rolled two sheets of flimsy and a heavier top sheet, carbon paper sandwiched between them, into his portable. 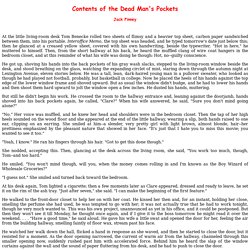 Interoffice Memo, the top sheet was headed, and he typed tomorrow's date just below this; then he glanced at a creased yellow sheet, covered with his own handwriting, beside the typewriter. "Hot in here," he muttered to himself. Story 2 Ruthless. Top 10 contemporary short stories. This summer, I read the entries for this year’s BBC National short story prize, and discussed with my fellow judges the vexed question of how the “best” might be identified. 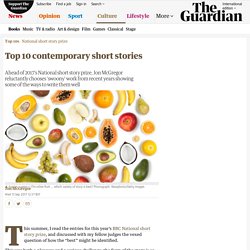 This was both a pleasure and a serious challenge: the form of the story is so capacious and diverse that at times we were comparing apples and pears, or at least looking at an unfamiliar fruit and arguing over whether to call it an apple or a pear. (Rest assured, though: the challenge is not impossible. An apple is always better than a pear.) Friday Tyrant - Pee on Water. Just tore over this story for like the 20th time since I first came across it for an issue of New York Tyrant. 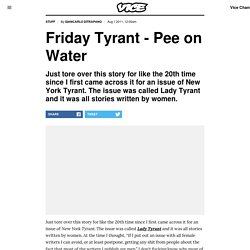 The issue was called Lady Tyrant and it was all stories written by women. At the time I thought, “If I put out an issue with all female writers I can avoid, or at least postpone, getting any shit from people about the fact that most of the writers I publish are men.” I don't fucking know why most of the stories in the Tyrant turn out to be written by men. Contemporary Short Stories High School Students Will Love. Short stories offer a wealth of teaching opportunities for students of all ages. 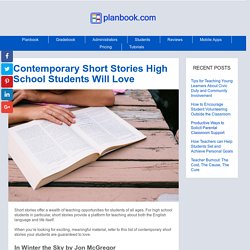 For high school students in particular, short stories provide a platform for teaching about both the English language and life itself. When you’re looking for exciting, meaningful material, refer to this list of contemporary short stories your students are guaranteed to love. In Winter the Sky. In the summer of 2002, Granta’s Bad Company issue, which featured work by Milan Kundera, Arthur Miller, Gary Shteyngart and Edmund White, introduced a startlingly new voice: Jon McGregor. 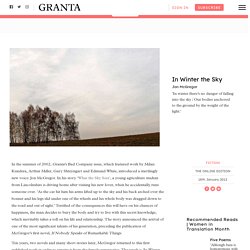 In his story ‘What the Sky Sees’, a young agriculture student from Lincolnshire is driving home after visiting his new lover, when he accidentally runs someone over. ‘As the car hit him his arms lifted up to the sky and his back arched over the bonnet and his legs slid under one of the wheels and his whole body was dragged down to the road and out of sight.’ Terrified of the consequences this will have on his chances of happiness, the man decides to bury the body and try to live with this secret knowledge, which inevitably takes a toll on his life and relationship.

The story announced the arrival of one of the most significant talents of his generation, preceding the publication of McGregor’s first novel, If Nobody Speaks of Remarkable Things. Roald Dahl Short Stories. Roald Dahl is known for clever, unsettling and highly entertaining short stories. 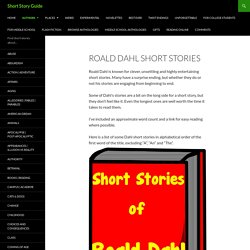 Many have a surprise ending, but whether they do or not his stories are engaging from beginning to end. Some of Dahl’s stories are a bit on the long side for a short story, but they don’t feel like it. Even the longest ones are well worth the time it takes to read them. I’ve included an approximate word count and a link for easy reading where possible. Here is a list of some Dahl short stories in alphabetical order of the first word of the title, excluding “A”, “An” and “The”. An African Story | 5,550 words An old man thinks he hears a noise.

Fivedials no25. “Cat Person” Audio: Kristen Roupenian reads. Margot met Robert on a Wednesday night toward the end of her fall semester. She was working behind the concession stand at the artsy movie theatre downtown when he came in and bought a large popcorn and a box of Red Vines. “That’s an . . . unusual choice,” she said. Nine Stories by J D Salinger. Eleven Classic Short Stories Podcast by Saki. Product Details Description A slim volume podcast collection of eleven classic short stories read by Mike Bennett. 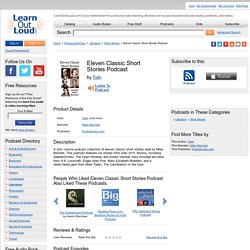 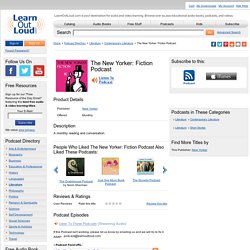 People Who Liked The New Yorker: Fiction Podcast Also Liked These Podcasts: Reviews & Ratings User Reviews Rate this title Podcast Episodes. MonkStry. Symbols and Signs. For the fourth time in as many years, they were confronted with the problem of what birthday present to take to a young man who was incurably deranged in his mind. Desires he had none. Man-made objects were to him either hives of evil, vibrant with a malignant activity that he alone could perceive, or gross comforts for which no use could be found in his abstract world.

Because They Wanted To. A Beneficiary. Caches of old papers are like graves; you shouldn’t open them. Her mother had been cremated. There was no marble stone incised “Laila de Morne, born, died, actress.” She had always lied about her age; her name, too—the name she used wasn’t her natal name, too ethnically limiting to suggest her uniqueness in a cast list. It wasn’t her married name, either. List of Short Stories Online. Harvey’s Dream. Janet turns from the sink and, boom, all at once her husband of nearly thirty years is sitting at the kitchen table in a white T-shirt and a pair of Big Dog boxers, watching her. More and more often she has found this weekday commodore of Wall Street in just this place and dressed in just this fashion come Saturday morning: slumped at the shoulder and blank in the eye, a white scruff showing on his cheeks, man-tits sagging out the front of his T, hair standing up in back like Alfalfa of the Little Rascals grown old and stupid.

Lorry Raja by Madhuri Vijay. What happened was that my older brother, Siju, got a job as a lorry driver at the mine and started acting like a big shot. He stopped playing with Munna the way he used to, tossing him into the air like a sack of sand, making him sputter with laughter. A Tiny Feast. The Zero Meter Diving Team by Jim Shepard. Guilt, Guilt, Guilt. Bullet. Wk 8 Dance in America. Emergency by Denis Johnson. Brownies. Story Hour in the Library - ZZ Packer. Bloom Silver Water.