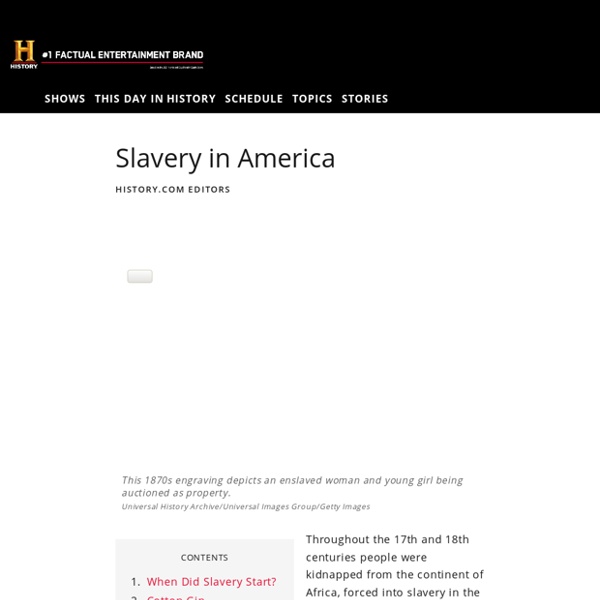 The South would reach the breaking point the following year, when Republican candidate Abraham Lincoln was elected as president. Within three months, seven southern states had seceded to form the Confederate States of America; four more would follow after the Civil War (1861-65) began. Though Lincoln’s antislavery views were well established, the central Union war aim at first was not to abolish slavery, but to preserve the United States as a nation. Abolition became a war aim only later, due to military necessity, growing anti-slavery sentiment in the North and the self-emancipation of many African Americans who fled enslavement as Union troops swept through the South. Five days after the bloody Union victory at Antietam in September 1862, Lincoln issued a preliminary emancipation proclamation, and on January 1, 1863, he made it official that “slaves within any State, or designated part of a State…in rebellion,…shall be then, thenceforward, and forever free.”

Riches & Misery: The Consequences Of The Atlantic Slave Trade Copyrighted image Copyright: BBC A recreation of an oriental-style party thrown by William Beckford of Fonthill (Orlando Wells) from the OU/BBC co-production The Slavery Business The movement of millions of Africans to the New World, during a period of roughly four hundred years, was by any standards a major historical phenomenon, with long-term international consequences. To assess these consequences, we need to look at the three corners of the Atlantic's "triangular trade". First, what effects did the trade (and the loss of so many people) have on Africa itself? Second, how important was the trade to the development of the Americas? Slavery in the United States The slave market in Atlanta, Georgia, 1864 (Library of Congress) When the North American continent was first colonized by Europeans, the land was vast, the work was harsh, and there was a severe shortage of labor. Men and women were needed to work the land. White bond servants, paying their passage across the ocean from Europe through indentured labor, eased but did not solve the problem. Early in the seventeenth century, a Dutch ship loaded with African slaves introduced a solution—and a new problem—to the New World.

Here's Everyone Who's Immigrated to the U.S. Since 1820 From 1820 to 2013, 79 million people obtained lawful permanent resident status in the United States. The interactive map below visualizes all of them based on their prior country of residence. The brightness of a country corresponds to its total migration to the U.S. at the given time. Use the controls at the bottom to stop / resume the animation or to move back and forth in time. education Welcome back, {* welcomeName *} {* loginWidget *} Welcome back! {* #signInForm *} {* signInEmailAddress *} {* currentPassword *} {* /signInForm *} Your account has been deactivated. Digital History Printable Version Although slavery was highly profitable, it had a negative impact on the southern economy. It impeded the development of industry and cities and contributed to high debts, soil exhaustion, and a lack of technological innovation. The philosopher and poet Ralph Waldo Emerson said that “slavery is no scholar, no improver; it does not love the whistle of the railroad; it does not love the newspaper, the mail-bag, a college, a book or a preacher who has the absurd whim of saying what he thinks; it does not increase the white population; it does not improve the soil; everything goes to decay.” There appears to be a large element of truth in Emerson’s observation.

Compare Sweden To The United States With its 318,892,103 people, The United States is the 3rd largest country in the world by population. It is the 3rd largest country in the world by area with 9,826,675 square kilometers. Britain's American colonies broke with the mother country in 1776 and were recognized as the new nation of the United States of America following the Treaty of Paris in 1783. During the 19th and 20th centuries, 37 new states were added to the original 13 as the nation expanded across the North American continent and acquired a number of overseas possessions. The two most traumatic experiences in the nation's history were the Civil War (1861-65), in which a northern Union of states defeated a secessionist Confederacy of 11 southern slave states, and the Great Depression of the 1930s, an economic downturn during which about a quarter of the labor force lost its jobs.

Jim Crow Laws and Racial Segregation - Social Welfare History Project Jim Crow Laws and Racial Segregation Introduction: Immediately following the Civil War and adoption of the 13th Amendment, most states of the former Confederacy adopted Black Codes, laws modeled on former slave laws. These laws were intended to limit the new freedom of emancipated African Americans by restricting their movement and by forcing them into a labor economy based on low wages and debt. Vagrancy laws allowed blacks to be arrested for minor infractions. A system of penal labor known as convict leasing was established at this time. Black men convicted for vagrancy would be used as unpaid laborers, and thus effectively re-enslaved.

Slavery in America began when the first African slaves were brought to the North American colony of Jamestown, Virginia, in 1619, to help in the production of tobacco. Slavery was practiced throughout the American colonies in the 17th and 18th centuries, and African- American slaves helped build the economic foundation of the new nation. Native slavery was also practiced in North America. by nadazahrai Oct 31