Simple GTD® with Apple’s Reminders App. If you aspire to get a little more organised in 2013 you are short of excuses since that does not necessarily involve buying, installing, learning and setting up a productivity black belt application such as OmniFocus. 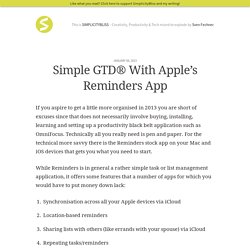 Technically all you really need is pen and paper. For the technical more savvy there is the Reminders stock app on your Mac and iOS devices that gets you what you need to start. While Reminders is in general a rather simple task or list management application, it offers some features that a number of apps for which you would have to put money down lack: Synchronisation across all your Apple devices via iCloudLocation-based remindersSharing lists with others (like errands with your spouse) via iCloudRepeating tasks/reminders Overall, managing your obligations and commitments in life is more than doable using Reminders. The Ultimate Guide to OmniFocus 2 - Tuts+ Computer Skills Tutorial.

The most advanced task management apps are often the most confusing to use when you’re just getting started. 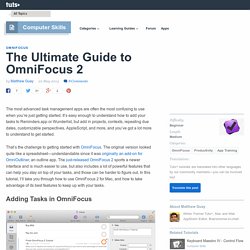 It’s easy enough to understand how to add your tasks to Reminders.app or Wunderlist, but add in projects, contexts, repeating due dates, customizable perspectives, AppleScript, and more, and you’ve got a lot more to understand to get started. That’s the challenge to getting started with OmniFocus. The original version looked quite like a spreadsheet—understandable since it was originally an add-on for OmniOutliner, an outline app. The just-released OmniFocus 2 sports a newer interface and is much easier to use, but also includes a lot of powerful features that can help you stay on top of your tasks, and those can be harder to figure out. 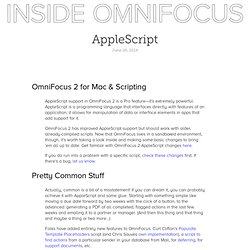 AppleScript is a programming language that interfaces directly with features of an application; it allows for manipulation of data or interface elements in apps that add support for it. OmniFocus 2 has improved AppleScript support but should work with older, already-compiled scripts. Templates.scpt. OmniFocus is an incredible piece of software. 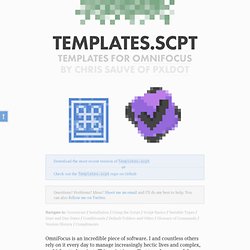 I and countless others rely on it every day to manage increasingly hectic lives and complex, multi-facetted projects.This script is an effort to reduce one of the largest sources of friction remaining in my OmniFocus setup: maintaining and creating projects that don't recur on even intervals, but occur frequently enough that their planning and capture becomes a time sink. Screencast Installation Download the most recent version of the script (Templates.scpt) from the link above. Journal - Scripts for OmniFocus 2 for Mac. At Omni we’re hard at work putting the finishing touches on OmniFocus 2 for Mac. 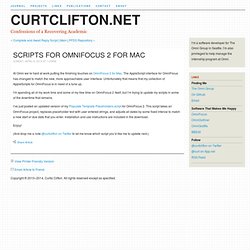 The AppleScript interface for OmniFocus has changed to match the new, more approachable user interface. The Big OmniFocus 2 For Mac Round-Up. OmniFocus 1 for Mac has been around since early 2008 and was more than due for an upgrade. 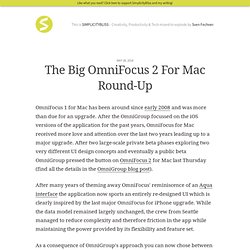 After the OmniGroup focussed on the iOS versions of the application for the past years, OmniFocus for Mac received more love and attention over the last two years leading up to a major upgrade. After two large-scale private beta phases exploring two very different UI design concepts and eventually a public beta OmniGroup pressed the button on OmniFocus 2 for Mac last Thursday (find all the details in the OmniGroup blog post). As a consequence of OmniGroup's approach you can now chose between a Standard and a Professional version of OmniFocus 2 for Mac. While the Standard version will work perfectly fine for all "casual" users, the Professional version maintains features like Perspectives and the AppleScript interface used by power users. Email Follow-Up in Mail.app. I have been using all sorts of tricks, methodologies and scripts to manage email follow-up. 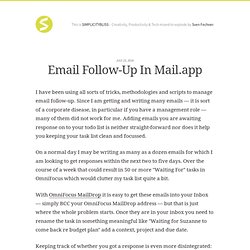 Since I am getting and writing many emails — it is sort of a corporate disease, in particular if you have a management role — many of them did not work for me. Adding emails you are awaiting response on to your todo list is neither straight-forward nor does it help you keeping your task list clean and focussed.

On a normal day I may be writing as many as a dozen emails for which I am looking to get responses within the next two to five days. Over the course of a week that could result in 50 or more "Waiting For" tasks in OmniFocus which would clutter my task list quite a bit. Gamify Your Life. Simple GTD® with Apple’s Reminders App. A Few Reminders.app Tips, Tricks & AppleScripts. The state of the Mac OS X todo manager market is something I am currently researching for one of my next posts. 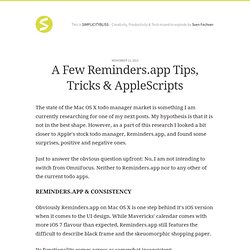 My hypothesis is that it is not in the best shape. However, as a part of this research I looked a bit closer to Apple's stock todo manager, Reminders.app, and found some surprises, positive and negative ones. Just to answer the obvious question upfront: No, I am not intending to switch from OmniFocus. Neither to Reminders.app nor to any other of the current todo apps. Reminders.app & Consistency Obviously Reminders.app on Mac OS X is one step behind it's iOS version when it comes to the UI design.

Its functionality comes across as somewhat inconsistent: A Few Tricks & Useful Scripts Finally, if you want to do simple GTD® with Reminders you can follow my tutorial which actually is consistently amongst the top 10 posts of my blog. Reminders.app on OS X is somewhat limited and inconsistent, but for its simplicity offers a lot of possibilities. Enhancing Reminders with AppleScript and Macros – MacStories. As The Omni Group keeps working on OmniFocus 2 for Mac and Apple continues seeding new betas of iOS 7 and OS X Mavericks to developers, I have been reconsidering Reminders’ simplicity and enjoying the built-in iCloud sync, which, unlike other types of iCloud , is working fine for me.

However, two things I miss from OmniFocus are the possibility to integrate the app with a web browser through bookmarklets and the system-wide Quick Entry panel ; I use both tools on a daily basis to easily save a browser’s tab into OmniFocus’ Inbox, or to bring up a text field where I can jot down an idea and know that, no matter the app I’m using, it’ll be saved into OmniFocus. Hog Bay Software Wiki — TaskPaperArticles. Ofexport/DOCUMENTATION.md at master · psidnell/ofexport. Ofexport - export to text, taskpaper, html, opml. Quote: 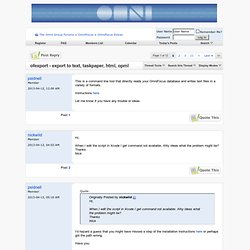 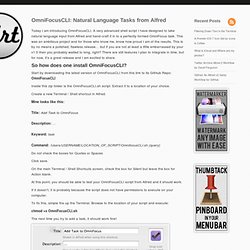 A very advanced shell script I have designed to take natural language input from Alfred and hand-craft it in to a perfectly formed OmniFocus task. This was an ambitious project and for those who know me, know how proud I am of the results. This is by no means a polished, flawless release… but if you are not at least a little embarrassed by your v1.0 then you probably waited to long, right? Tree-tools/OmniFocus scripts at master · RobTrew/tree-tools. OmniFocus Scripts. Projects. When I’m not programming for a living, I often program for fun. It’s a sickness, really. Here’s some non-commercial software that I’ve written or collaborated on with former students. OmniFocus. Enter OmniFocus Tasks from Windows. I’ve been using OmniFocus as my primary task list manager for some time now. At work I use my company’s provided equipment which happens to be PC/Windows based. For a long time I’ve struggled with how could I effectively add new tasks at work from my PC to OmniFocus, without having to bring in my personal iPhone or MBP.

For a long time I’d use the mail clipping functionality in OmniFocus, but that’s gotten messy due to our Exchange Server automatically adding signature and footers to outgoing emails. So I’ve been wondering what’s my next best option? Voila… Federico Vitticci (@vitticci) gave me an answer. Perquisites: Here are the things you’ll need to make this work. Working with OmniFocus with Android and Windows. OmniFocus is my to-do app of choice, however it’s Mac-only. I often have to use a Windows PC and I own an Android phone. Here are some solutions for working with OmniFocus when I am away from my Mac or iPad: Capture 1.

Ofthemes. We are changing some of the icons and images inside omnifocus.app so the installation it's not as simple as just double clicking the .ofocus-theme file. There is a small script to copy the resources to the proper places, just follow this instructions: Get and install the latest version from Github: Just copy and paste in a terminal: curl -L -O unzip master.zip; rm master.zip cd Omnifocus-modernize-theme-master sh . /install.sh When prompted, click "Replace" to apply the theme, and restart OmniFocus. Notes and troubleshooting - If you have the App Store version of omnifocus, you will need to run the script using sudo (sudo sh . Alternative Ways To Add Actions Into OmniFocus – MacStories. Auto-Open Files, Apps Or Scripts On Mac When A Calendar Event Is Due. One of the things I love about well-built reminder apps – like the stock Reminder app in iOS – is that alerts can be triggered not just by time but by location as well.

While the Reminder app in iOS has only limited choices as to what can trigger an alert, there are other apps available that give you a richer choice. As far as triggers are concerned, you will find apps supporting quite a variety of them, but alerts are a different story, and are often limited in type; you’ll get an audio alert, or a notification on your screen but there seemingly isn’t much else that can be done. 43 Folders Series: Inbox Zero. These are posts from a special 43 Folders series looking at the skills, tools, and attitude needed to empty your email inbox — and then keep it that way.

You can visit each of the posts by clicking the title. And don’t miss the “Related Articles” for our all-time popular posts on productively dealing with email. Looking for the Inbox Zero video? The full 1-hour video for Merlin’s Inbox Zero presentation at Google is available for free down here — or check out this post about the video and slideshow. Posts in the Inbox Zero series 43F Series: Inbox Zero [Introduction] - “Clearly, the problem of email overload is taking a toll on all our time, productivity, and sanity, mainly because most of us lack a cohesive system for processing our messages and converting them into appropriate actions as quickly as possible.”Inbox Zero: Articles of faith - “When I first suggested the email DMZ and said there was a way to get your inbox to zero in 20 minutes, I wasn’t lying.