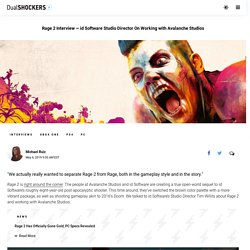 The people at Avalanche Studios and id Software are creating a true open-world sequel to id Software’s roughly eight-year-old post-apocalyptic shooter. This time around, they’ve switched the brown color palette with a more vibrant package, as well as shooting gameplay akin to 2016’s Doom. We talked to id Software’s Studio Director Tim Willits about Rage 2 and working with Avalanche Studios. Building Ori and the Will of the Wisps with 80 people working from home. The Fall & Rise of Hitman (Documentary) How A Plague Tale: Innocence’s rat hordes were made. What it was like working at Kojima Productions Los Angeles. OnOn stage at the 2013 Game Developers Conference, Tom Sekine took the podium to confirm what many already knew: Metal Gear creator Hideo Kojima was starting a new development studio in Los Angeles. 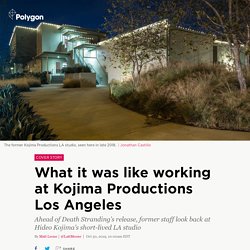 Long-rumored, and even advertised on industry site Gamasutra, the studio had been hiring for the previous six months. But as things in the game industry often go, it hadn’t been formally announced. “As of today, it is official,” said Sekine. With Sekine installed as studio head, the team was in the early stages of planning Kojima Productions Los Angeles, a sister studio to Kojima Productions in Tokyo born in part from Kojima’s love of Los Angeles and the movie business. THQ Nordic parent Embracer Group now has 26 studios, more to be announced. How ArenaNet is rewriting the narrative for its narrative writers. Telltale: The Human Stories Behind The Games. Toxic management cost an award-winning game studio its best developers.

In 2012, on a light-drenched stage amid screams and cheers, Star Trek actress Zoe Saldana announced Spike Video Game Awards’ game of the year: The Walking Dead. 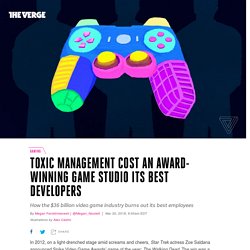 The win was a huge coup for its relatively small developer, Telltale Games. Its emotional, storytelling-focused take on the popular zombie franchise beat out hugely popular games like Dishonored and Mass Effect 3 that required hundreds of developers and cost tens of millions of dollars to make. The Telltale Games team, including co-founders Kevin Bruner and Dan Connors, and The Walking Dead creator Robert Kirkman, made their way onstage to accept the award. Inside Improbable, the $1billion UK startup building the Matrix. CCP: “It’s all about passion, curiosity and drive” – MCV.

Resident Evil, Monster Hunter World and Devil May Cry 5: How Capcom got its mojo. Like many Japanese companies, it's felt that Capcom has had a hard time figuring out what to do in the modern games market. 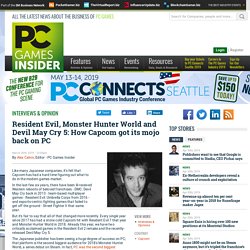 In the last few six years, there have been ill-received Western reboots of beloved franchises - DMC: Devil May Cry back in 2013 - team-based multiplayer games - Resident Evil: Umbrella Corps from 2016 - and esports-centric fighting games that failed to get off the ground - Street Fighter V that same year. But it's fair to say that all of that changed more recently. Every single year since 2017 has had a stone cold Capcom hit with Resident Evil 7 that year and Monster Hunter World in 2018. 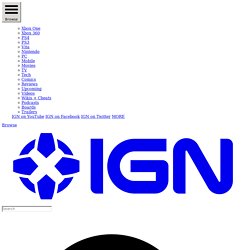 “We have a lot of ideas, we’re working on a lot of cool things.” By Caleb Lawson This month's IGN First is a bit different than usual. Rather than highlighting a single game -- we'll get back to that next month -- we're highlighting the Japanese game industry as a whole. We visited some of the biggest studios in Japan to focus on their games and creative processes. How Warner Bros came from nowhere to take on EA and Activision. There was a time – just a few years ago – when the big movie studios were a legitimate threat to the likes of Ubisoft, EA and Activision. 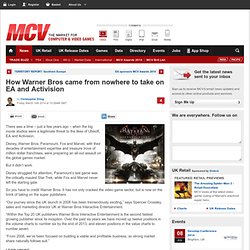 Disney, Warner Bros, Paramount, Fox and Marvel, with their decades of entertainment expertise and treasure trove of million dollar franchises, were preparing an all-out assault on the global games market. But it didn’t work. Disney struggled for attention, Paramount’s last game was the critically mauled Star Trek, while Fox and Marvel never left the starting gate. So you have to credit Warner Bros. Life After Death: The History of Turtle Rock Studios. The Secret History of Volition - Features. What started out as a simple interview about a studio evolved into this: an hour-long documentary about the 18-year history of Volition, Inc. 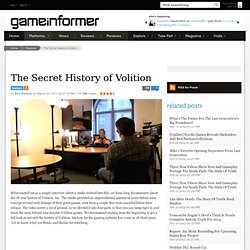 The studio provided an unprecedented amount of never-before-seen concept art and early footage of their great games, even from a couple that were canceled before their release. The video covers a lot of ground, so we divided it into four parts so that you can jump right in and learn the story behind your favorite Volition games. The fall of THQ. THQ's staff saw the stock price falling. 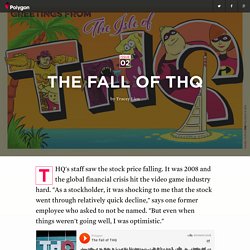 It was 2008 and the global financial crisis hit the video game industry hard. "As a stockholder, it was shocking to me that the stock went through relatively quick decline," says one former employee who asked to not be named. "But even when things weren't going well, I was optimistic. " And he had reason to be. THQ wasn't doing well, but neither was anyone else. Meet The Players Who Create EVE Online Propaganda. Samahiel Sotken is not your average EVE Online player. 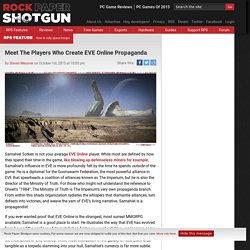 The final years of Irrational Games, according to those who were there. The employees were shocked. 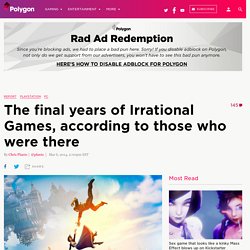 Irrational Games, the developer that created the BioShock series along with a number of other critically beloved video games, was viewed, by a number of sources close to the studio, as closure-proof: It had pedigree, talent and — to the outside world — creative carte blanche from its parent companies, 2K Games and Take-Two Interactive. When the studio's co-founder and president, Ken Levine, invited the team of nearly 100 employees into a meeting about the company's history last month, many were surprised to realize, as the presentation progressed, that this very history was coming to an end. More than a half dozen individuals who worked for Irrational Games during the development of BioShock Infinite, some of whom were there that final day, agreed to speak with Polygon anonymously about their experiences within the company.

Interview: Paul Porter, Sumo Digital – MCV. Could you please give an overview of Sumo’s history? Sumo was started in 2003, following the closure of Infogrames in Sheffield, by myself, Carl Cavers, Darren Mills and James North-Hearn.