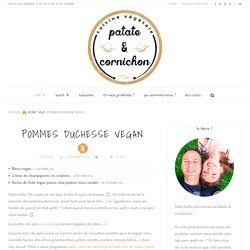 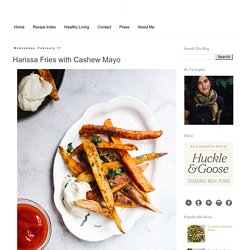 They are my warm, salty, and greasey version of a little security blankey. And if I could take them along with me in my purse everywhere I venture, I surely would. For me they are reminiscent of fall fairs, road trip dives, date nights, and carefree summer evenings - I'm feeling warm and fuzzy inside already! Every year around exam time when life would just became too hard to manage and anything but leggings and a topknot was too uncomfortable to bare, roasting up a tray of oven fries became our favourite easy dinner and study aid (that and the odd bag of kettle chips - pepperoncini pleeeease). Years later and school behind me, I still turn to oven fries after a long or turbulent day at work, or just when I feel I need a hug but there's nobody around. These fries are like the more sophisticated version of my old go to, primarily because they aren't doused in ketchup. There are two key steps to follow to make for crispy oven fries. 2 Tbsp. 1. 2. 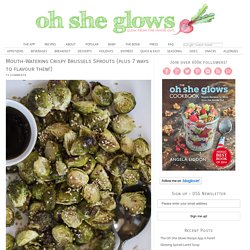 I can see it now, you’re raising an eyebrow and giving me the stink eye because your “b.s.” detector is going off. In fact, you probably didn’t even click on this post!? *sings* I’m all by myself. Or, maybe you share my excitement for this misunderstood vegetable. Cheesy Sweet Potato & Chickpea Bowl. I know that right now, it’s expected of me, as a food blogger, to share recipes that are super green and springy and use terms like “Rejuvenating,” “Purifying,” and “Goddess.” 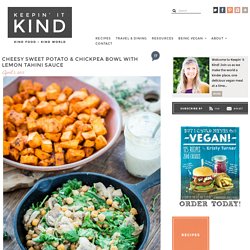 Bonus points if it involves asparagus. But I can’t quit this sweet potato & chickpea bowl. I can’t and I won’t. I’ve talked before about not wanting to do a lot of cooking when I get home from the office. With this recipe, I can pop the nooch (nutritional yeast)-coated sweet potatoes (aka The Best Damn Roasted Sweet Potatoes Ever) in the oven for half an hour and cook up the chickpeas in the last 5-10 minutes that they’re in the oven. 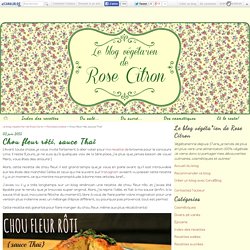 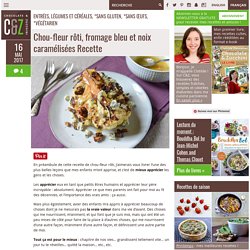 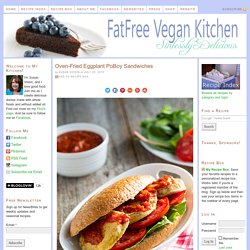 I lost no time checking that theory out on one of my favorite summer veggies, eggplant. Giardiniera Roasted Vegetables - Beard + Bonnet. In the past I have declared my utter dislike of all things pickled , but I think it is time for me to retract those statements. 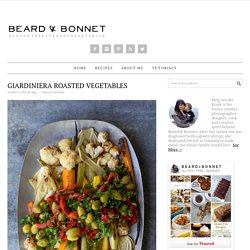 I have recently learned that I really only have a dislike for dill pickles. Yay me!!! Honey-Roasted Carrots & Beets with Carrot-Top & Marcona Almond Pesto. This week our CSA members are receiving beautiful bunches of beets and carrots (along with many other seasonal gems!) 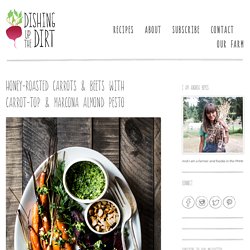 And I couldn’t wait to prepare this lovely platter of roasted roots. We tossed the veggies in some oil and a touch of honey before roasting them until tender. Favorite Lemon Pepper Baked Tempeh Cubes + Tempeh and Herbed Rice Bowl. I was chatting with a friend recently, and she mentioned that she likes the idea of tempeh, but every time she plans to make it and goes searching for recipes, she gets overwhelmed. 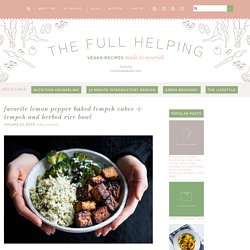 “Do I really have to steam it first?” She asked. “Is it that bitter?” My answers were no, and no. For the most part, I think that tempeh can be really easy to prepare, so long as you use a good marinade. The idea behind steaming tempeh prior to cooking is that tempeh has a naturally bitter taste. Once the cubes are baked, you can use them for essentially any type of dish. Cauliflower shawarma + homemade (gf+df) chickpea pita bread.

Even though I think it's totally wrong to do so, I am calling this cauliflower shawarma because the spice blend used here is hard to describe any other way. And also because this recipe was inspired by a cauliflower shawarma recipe I saw in a recent special issue of Saveur, and if they got away with calling it shawarma, then I am hoping I can too. Depending on the day, I might tell you that Middle Eastern / Israeli food is the most inspiring to me. On other days it might be Indian, or Japanese .... on some days Italian. But today I am going with Israeli food because falafel is one of my favorite foods of all time, and also because I have not been able to get this vegetarian knock-off schwarma off my mind since I first made it.

This blend of spices, and the use of sumac (my new favorite spice), packs such a powerful flavor punch. Since you would be making the extra effort to make this from scratch, then I would suggest eating these warm out of the oven. Baked Farro Risotto with Cauliflower. If you’ve picked up a copy of The Easy Vegetarian Kitchen, you’re probably already familiar with my love of using farro in risottos.

The chewy texture of cooked farro lends itself well to the overall dish. Even when using the pearled variety, it feels a bit heartier than if using arborio rice. Of course, time isn’t always on our sides to make regular risotto and that’s where this baked version comes in handy. No stirring and adding liquids, just throwing things in a pot a few times. Moroccan Millet & Roasted Carrot Pilaf. January has been mild here in New York so far, but we’re moving into that time of year when winter becomes a reality.

The holiday lights have been taken down, the new year’s commotion has passed, and we stare ahead at a long few months of slush. I’m a cold weather person at heart–a homebody who secretly relishes any opportunity to nest–but even I feel susceptible to gloom during this seasonal stretch. I fight back with as much colorful, warming food as possible, and this golden Moroccan millet & roasted carrot pilaf is my latest antidote to grayness outside. It took me a long time to warm up to millet; when I first tried it, it seemed dry to me, less fluffy and flavorful than quinoa and less dense and substantive than farro or barley.

Over time, I’ve come to appreciate its mild sweetness and its texture, which is perched nicely between the lightness of quinoa and the heft of rice. Recipe type: main dish. Vegan Pizza Dip. Vegan Pizza Dip. Easy Pizza Dip with sauteed mushrooms, olives, pizza sauce and from scratch vegan mozzarella cream sauce. Gluten-free Recipe. Can be soy-free. SuperBowl is just around the corner. Sadly Seahawks wont be there this year and Russell will be missed. Socca with Avocado and Salsa Verde. Last week I discovered that the farmers market was not only open for the season, but a stone's throw away from where we live, and on a day when I wasn't working! Pinch me, 'cause this never happens. So on Sunday after our slow morning wake up, multiple bodums, and a quick rifle through the change jars for cash, Adam and I headed to the market to see what treasures we could find.

Being the first clear day after nearly a week of thunderstorms, it's safe to say the market was a little intense. Baring the crowds we were able to muster together a pretty spectacular array of goodies before becoming overwhelmed and in need of more hit of caffeine. Throwing together whatever is on sale, seasonal, or simply going off in the fridge into one of our staple dishes is a lifesaver for weekday meals. Socca with Avocado and Salsa Verde Serves 2. 1 Cup Chickpea Flour1 Cup Water2 Tbsp. Vegan Enchiladas Recipe with Lentils and Black Beans. 'Everyday Cooking' with Minimalist Baker’s Dana Shultz. You may not recognize the name Dana Shultz, but chances are good you’ve enjoyed one of her recipes. On her hugely popular health blog, Minimalist Baker, Shultz crafts tantalizing dishes that are as simple as they are delicious—each recipe requires 10 or fewer ingredients, takes less than 30 minutes to prepare, or can be made in a single bowl.

In recent years, recipes have also been plant-based and largely gluten-free, but don’t let that scare you off—unless you’re afraid of peanut butter cup pie or garlic mac & cheese! April 26 marks the debut of Shultz’s first print cookbook, Everyday Cooking: 101 Entirely Plant-Based, Mostly-Gluten-Free, Easy and Delicious Recipes. We chatted with Shultz about the new book, how Portland has influenced her recipes, and how to make the best vegan enchiladas. Prior to Minimalist Baker, did you have experience in photography, food, or writing? Minimalist Baker stands out in part for its very specific concept. Not at all, at least as far I can tell.

Portobello Nachos - Golubka Kitchen. This post was created in partnership with Newman’s Own Organics. Roasting up a bunch of goodies and serving them up right on the baking sheet together with sauce and toppings is a sure way to a fun dinner or a low-maintenance spread for last minute company. In the winter, I’ll bake an assortment of roots rubbed with plenty of spices, and slather them with herby sauce or tahini/cashew cream to go alongside some beans or grains.