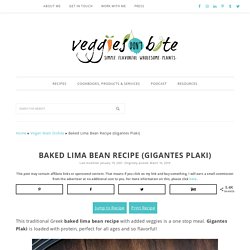 Gigantes Plaki is loaded with protein, perfect for all ages and so flavorful! This recipe was originally published on 11/5/15 I’m back with amazing Greek recipes from Yiayia’s kitchen. Per usual, she put her own spin on the traditional version, because she’s my mom and nothing is ever good enough as is (so we all know where I get it from). Lima Beans (Gigantes Beans) Our BFF This lima bean recipe is a kid favorite, and by favorite I mean 2 1/2 kids shovel it in when she brings it over. Are lima beans good for you?

Lima beans are an excellent source of protein and fiber. The high fiber content prevents your blood sugar from rising too fast, so it’s great for people that need to watch that. The protein in lima beans help make this an all in one meal. Lima beans also have iron, which is needed for those of us who don’t eat meat. A few other healthy bean recipes you may like are: Sophia DeSantis Prep Time 15 mins. Creamy Vegan Risotto with Spinach. Vegan Pot Pie Recipe with a Flaky Crust - Namely Marly. This vegan pot pie recipe is a savory dish filled with vegan chicken and vegetables in a gravy-like sauce. 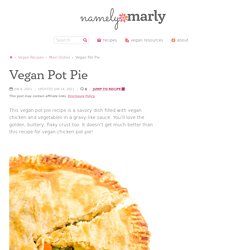 You’ll love the golden, buttery, flaky crust too. It doesn’t get much better than this recipe for vegan chicken pot pie! I used to love pot pie when I was a kid. We didn’t have them around very much, but when we did, I was the first in line for dinner! Creamy Vegan Curry Lentil Casserole Recipe. Make this easy Vegan Curry Lentil Casserole whenever that craving for restaurant-style creamy lentil dishes hits. 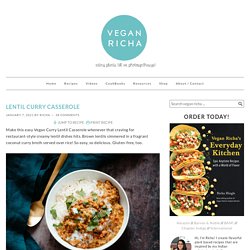 Brown lentils simmered in a fragrant coconut curry broth served over rice! So easy, so delicious. Gluten-free, too. We all have that bag of dried lentils somewhere in the back of our pantry, just waiting for us to find them, add some spices and simple pantry staple ingredients to them, and create an unexpectedly delicious and healthy dish that everyone will LOVE! Smoky Squash Chili with Quinoa, Pinto & Black Beans. October 17, 2018 (last updated December 30, 2020) Smoky squash chili with quinoa, pinto and black beans is a hearty, healthy, and protein-rich recipe that is perfect for brisk days. 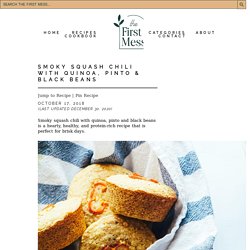 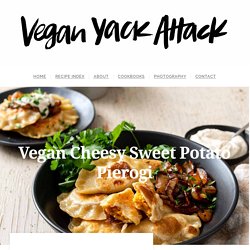 This batch of vegan cheesy sweet potato pierogi is exactly that! And even better when topped with the optional caramelized onions. I know I’ve said this before, but I’m half-Polish, so I grew up with a number of Central/Eastern European foods. My favorite to this day, is still pierogi! (Which btw is the plural of pierog in Polish). Vegan Lentil, Potato and Sausage Stew - Delish Knowledge. Here with more comfort food for you! 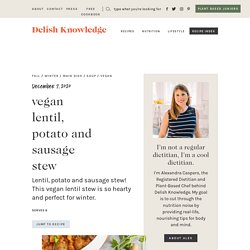 In the form of the coziest stick-to-your-ribs lentil, potato and sausage stew. It’s the kinda meal that you can have simmering on the stove all afternoon, warming the house while also making it smell amazing. Well, if you’re the kind of person who would prefer the smell of sizzling onions and garlic like I am. Garlicky Korean Mac and Cheese with Gochujang. Spicy Garlicky Korean Mac and Cheese with Gochujang. 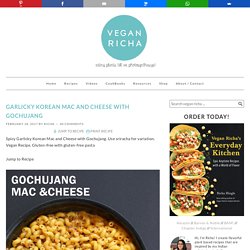 Use sriracha for variation. Jalapeno Chili Cornbread Casserole. I love baking of casseroles in fall and winter. 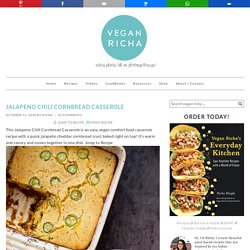 Just put everything in one dish no standing around and you get hot steaming amazing food. Everyone loves a good comfort food casserole and this chili cornbread casserole is especially delicious – so saucy and flavorful. It all starts out with a savory vegan lentil bean chili which is topped with an addicting maple sweetened jalapeño cornbread crust. You’ll find it difficult to stop nibbling away at that cornbread topping it’s so good with that hint of sweetness that balances out the heat from the chili and jalapenos. The cornbread is delicious and moist because of being baked on top of the chili! Vegan Lentil Shepherd's Pie - Mushroom Lentil Shepherdless Pie. Vegan Lentil Shepherd’s Pie – Mushroom and Lentil Shepherdless Pie with Gravy and Garlic mashed potatoes. 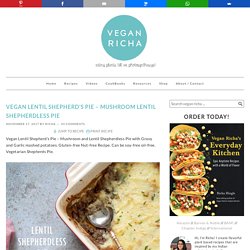 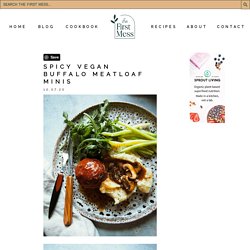 But they are incredibly flavourful, satiating, perfectly moist without being soggy, a bit nutty, and that sweet-spicy glaze really brings it home. I love that this recipe comes together simply with a lot of pantry ingredients. Our Canadian Thanksgiving is coming up this weekend and I wanted to make something that was homey and appropriate, but maybe also a bit different. I love the classic hippy-dip nut and lentil loaves so much, but I started thinking about that spicy-tangy buffalo sauce flavour in the loaf and in the glaze.

Pumpkin Chili (30 Minute Vegan Recipe) - Veggies Save The Day. Vegan Garden Keeper's Pie with Beets & Lentils. When my inbox is multi-paged, the bills are piling up, there’s drama at work, or when I’ve just had one of those days, you can find me out in the garden with my big girl boots on, just getting dirty and feeling the feelings. I planted a lot of things this year, all successful in some way or another. I still have some greens out there, but I saved the pulling of my absolute favourite vegetable for when the Fall was certifiably cool. The celery roots. The ones that look like baby aliens, but taste like absolute heaven. Creamy textured, sweet, kinda grassy like parsley, and celery-like. Mushroom Gravy Pie with Garlicky Kale Mashed Potatoes. I’m going to cut right to our mushroom gravy pie today.

My eyes have been bugging out a bit lately. I think it’s just excessive screen time mixed with a bit of seasonal allergies. The summer-like temperatures just keep going here, which means plenty of pollen and dust riding through the air and into our open windows. A little while ago, I asked my Instagram followers what their favourite part of the Thanksgiving meal was. I got the overwhelming impression that we all just love to smother carbs in gravy. French Onion Shepherd's Pie w/ Lentils & Cauliflower Potato Mash (vegan) Another great holiday entertaining recipe for you! This French onion shepherd’s pie is a total knockout. Super comforting, hearty enough to serve as a plant-based main, make ahead-friendly, and just so flavourful from all of the caramelized onions. Autumn Squash Wild Rice Bake - Vegan Yack Attack. Hearty wild rice with some of my favorite Fall vegetables makes for an easy, hearty, delicious dinner in the form of a dump-and-bake Autumn Squash Wild Rice Bake!

After all of the love that my Chipotle Brown Rice Bake has gotten, I thought it was time to make a fall-appropriate rice bake! The first version I made about a month ago was good, but this final version is REALLY good. The perfect chewiness of wild rice, with a litany of autumn flavors, and veggies that have been cooked through to an almost creamy consistency.

Did I mention there’s tempeh and tahini in there for a boost of protein and iron? Vegan Broccoli Rice Casserole - A Virtual Vegan. Black Bean Quinoa Casserole (Vegan) - Veggies Save The Day. Mushroom Brown Rice Bake with Crispy Lentils & Gremolata (vegan) The inspiration points for this mushroom brown rice bake are found in both the typical pilaf cooking method as well as mujaddara, a recipe that first appeared in a cookbook in Iraq in 1226 (!!). Mujaddara, at its core, contains cooked lentils, rice (sometimes bulgur), and crisp caramelized onions. Lots of great information on this dish can be found here. Bubble and Squeak - A Virtual Vegan. Neverhomemaker: New and Improved: Pumpkin Chili Recipe. Vegan Pumpkin Chili - Delish Knowledge. A Sweet and Savory Plant Based Side Dish. I know I just posted corn chowder, but it’s still corn season here, which means sweet corn is still on the menu.

This vegan corn pudding is an easy, multipurpose side dish that straddles the space between savory and sweet. Pudding vs. casserole vs. soufflé I recently got Toni Tipton-Martin’s wonderful cookbook, Jubilee. Martin has a recipe for corn pudding that she describes as “a way for families to enjoy corn in a lush custard.” She also notes that corn pudding is also sometimes known as corn soufflé, which “gives you a sense of how refined and light it can be.” Martin bases her recipe on Carla Hall’s recipe, which involves beaten egg whites and a stir halfway through baking. Chickpea Spinach Pie with Berbere Spice. Chickpea Spinach Pie with Berbere Spice. Easy Chickpea Spinach Pastry for holidays and company with vegan puff pastry. Use spices or blends of choice. Use lentils for variation. Vegan Shepherd's Pie - Simple Vegan Blog. Mushroom Stout Pie With Potato Biscuits. 1-Hour Vegan Pot Pies. Delicious, flaky, veggie-packed vegan pot pies in less than 1 hour.