February sky guide: Early morning lovers can catch Venus in a planetary line-up on Valentine's Day - Science. If you love the serenity of the early mornings in summer, then you are in for a treat this Valentine's Day. 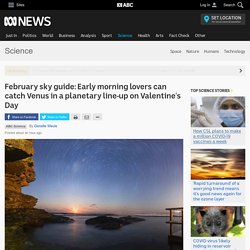 Venus — named after the Roman goddess of love — joins Jupiter and Saturn in a line above the eastern horizon with Mercury to the side about half an hour before dawn. "You'll have this beautiful line of planets," amateur astronomer Ian Musgrave said. "Venus will be about a handspan above the horizon, Jupiter will be above that, Mercury a bit off to the left, and Saturn will be above them all. 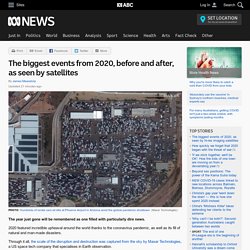 Meteorite crater discovered while drilling for gold in outback WA estimated to be 100 million years old - ABC News. Einsteinium: 100 years after Einstein's Nobel Prize, researchers reveal chemical secrets of element that bears his name. A century ago, an upstart German physicist by the name of Albert Einstein turned the scientific world on its head with his discovery of the photoelectric effect, which proved light to be both a particle and a wave. 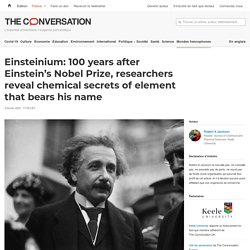 Awarded the 1921 Nobel prize in physics for his work, Einstein would later contribute to theories related to nuclear fusion and fission – arguably paving the way for the invention and detonation of nuclear weapons, as well as nuclear energy. And so, when elements previously unknown to science were discovered in the chemical debris of a nuclear explosion 69 years ago, it was fitting that scientists named what they found after the great physicist – adding “einsteinium” to the periodic table. 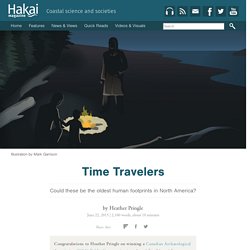 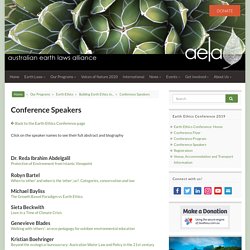 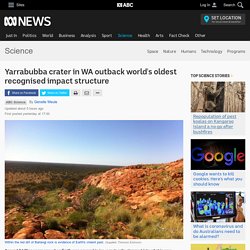 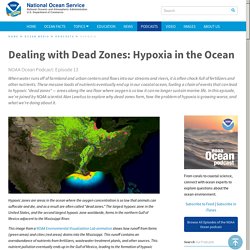 I’m Troy Kitch. In 2010, scientists discovered multicellular animals that don’t require oxygen to survive buried deep in the sediment at the bottom of the Mediterranean. Aside from some types of very simple bacteria and single-celled organisms, these are the only other known lifeforms on our planet that can survive in a zero oxygen environment. Grass growing around Mount Everest as global heating intensifies. Shrubs and grasses are springing up around Mount Everest and across the Himalayas, one of the most rapidly heating regions of the planet. 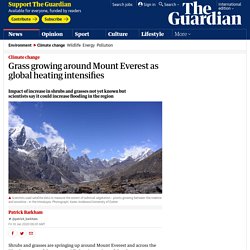 The impact on water supplies of the small but significant increase in vegetation between the treeline and snowline is not yet known but could increase flooding in the vast Hindu Kush Himalayan region, which covers 4.2msq km(1.6m sq miles), feeds Asia’s 10 largest river systems and supplies 1.4 billion people with water.

Scientists used satellite data to identify increases in vegetation in the inaccessible subnival (the highest zone allowing plant growth) ecosystem, made up of grasses and dwarf shrubs with seasonal snow. This ecosystem is known but could play a crucial role in the region’s hydrology, covering between five and 15 times the area of permanent glaciers and snow in the region. Uptick in Amazon Fire Activity in 2019. With the fire season in the Amazon approaching its midpoint, scientists using NASA satellites to track fire activity have confirmed an increase in the number and intensity of fires in the Brazilian Amazon in 2019, making it the most active fire year in that region since 2010. 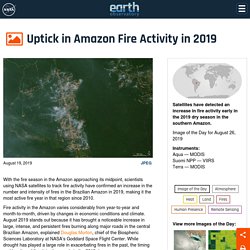 Fire activity in the Amazon varies considerably from year-to-year and month-to-month, driven by changes in economic conditions and climate. August 2019 stands out because it has brought a noticeable increase in large, intense, and persistent fires burning along major roads in the central Brazilian Amazon, explained Douglas Morton, chief of the Biospheric Sciences Laboratory at NASA’s Goddard Space Flight Center. Flat Earth: How did YouTube help spread a conspiracy theory? News BBC News Navigation Sections. 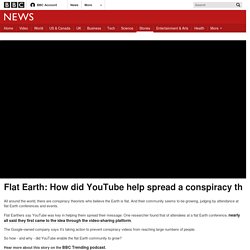 Half of the Worlds Oceans Will Change in Color by the End of this Century. Magnetic north just changed. Here's what that means. NASA Ozone Watch: Education. Identifying ozone variations This activity uses Ozone Watch to explore seasonal ozone hole data. Students use real ozone data to answer questions. Grade level: Middle (6-8), High (9-12) Constructing a model of ppbv of surface ozone This activity is associated with studies of surface ozone but can serve studies of stratospheric ozone as well. Outline of Earth sciences.

Earth science is a branch of the physical sciences which is a part of the natural sciences. It in turn has many branches. Earth's spheres[edit] Branches of Earth science[edit] Atmospheric science[edit] Atmospheric sciences Environmental science[edit] Atmosphere, Biosphere, Hydrosphere, and Lithosphere. Hawaii jolted by magnitude 6.9 quake as residents flee volcanic eruptions. The eruption affected Leilani Estates, a subdivision in the lower East Rift Zone of Kilauea volcano, according to the Hawaiian Volcano Observatory. Extinction event - Wikipedia. The Planet. Sixth mass extinction? Two-thirds of wildlife could be gone by 2020. Since 1970, there has already been a 58% overall decline in the numbers of fish, mammals, birds and reptiles worldwide, according to the WWF's latest bi-annual Living Planet Index.

New footprints from Laetoli and improving the science of fossil context. 14 Dec 2016. Where Our Human Ancestors Made an Impression. Article body copy. Laetoli. Natural Phenomena. Batagaika Crater Expands. Super stonehenge found below ground. Impact crater 19 miles wide found beneath Greenland glacier. A huge impact crater has been discovered under a half-mile-thick Greenland ice sheet. The enormous bowl-shaped dent appears to be the result of a mile-wide iron meteorite slamming into the island at a speed of 12 miles per second as recently as 12,000 years ago. Australian Indigenous Astronomy: Impact Craters in Aboriginal Dreamings, Part 2: Tnorala. By Duane Hamacher ----Notice to Aboriginal and Torres Strait Islander people: This article contains the names of people that have died.