Whatever Happened To New Math? How to Take SEL to the Next Level at Your School. Last month, the Aspen Institute’s National Commission on Social Emotional, and Academic Development released a long-awaited report titled “From a Nation at Risk to a Nation at Hope,” offering recommendations for further integrating social-emotional learning (SEL) into schools to support the whole student. 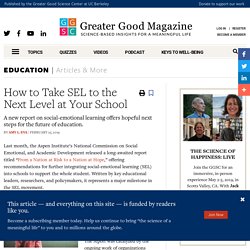 Written by key educational leaders, researchers, and policymakers, it represents a major milestone in the SEL movement. “The promotion of social, emotional, and academic learning is not a shifting educational fad; it is the substance of education itself,” the report says. Study: Kids Who Spend Time in Nature Become Happier Adults. The Empathetic School. Think we should be at school? Today’s climate strike is the biggest lesson of all. It started in front of the Swedish parliament, on 20 August – a regular school day. 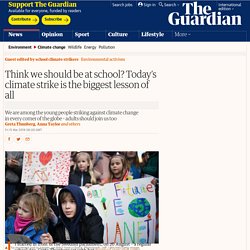 Greta Thunberg sat with her painted sign and some homemade flyers. This was the first school climate strike. Fridays wouldn’t be regular schooldays any longer. The rest of us, and many more alongside us, picked it up in Australia, Germany, Belgium, Switzerland, New Zealand, Uganda. DEY's mini-documentary with early childhood educator Kisha Reid - English. Better Than Carrots or Sticks. New research examines the use of humour in middle childhood. Laugh a minute The pair used existing video recordings compiled by a researcher at SUNY Geneseo in western New York State of 86 seven-year-olds playing with their siblings over 15 minutes. 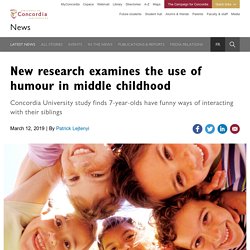 The siblings could be younger or older and of the same or opposite gender, but they were relatively close in age. Some pairs were given a toy village to play with, others a toy train set. Howe and Paine then developed a coding scheme to capture the different types of humour the children displayed. 'We get soft': Why Regina teacher says kids need to embrace cold, not escape it. When others hide inside and moan about the bitter cold, the kindergarten class at Prairie Sky School in Regina bundles up and goes outside no matter how frigid the temperature. 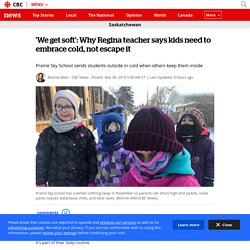 It's part of their daily routine. Their teacher, Anna Rose, says her students would have gone stir crazy if they had been forced to stay inside during the cold spell that stretched through most of February. "We were outside every day," Rose said. "The wind is the biggest challenge. 6 Problems with our School System. Children, Learning, and the Evaluative Gaze of School — Carol Black. The evaluative gaze of school is so constant a presence, so all-pervasive an eye, that many people have come to believe that children would actually not grow and develop without it. 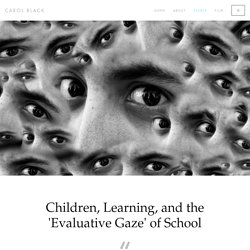 They believe that without their "feedback," without their constant "assessment," a child's development would literally slow or even stop. They believe that children would not learn from the things they experience and do and see and hear and make and read and imagine unless they have an adult to "assess" them (or unless the adult teaches them to "self-assess," which generally means teaching them to internalize the adult gaze.) For people whose experience is with children inside the school system, it may seem self-evident that this is true. How Early Academic Training Retards Intellectual Development. Source: Google Image approved for reuse In my last post I summarized research indicating that early academic training produces long-term harm. 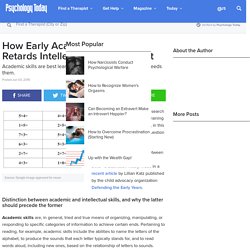 Now, in this post, I will delve a bit into the question of how that might happen. It's useful here to distinguish between academic skills and intellectual skills—a distinction nicely made in a recent article by Lillian Katz published by the child advocacy organization Defending the Early Years. article continues after advertisement Distinction between academic and intellectual skills, and why the latter should precede the former Academic skills are, in general, tried and true means of organizing, manipulating, or responding to specific categories of information to achieve certain ends.

I’m a big fan of treating Indigenous Knowledge — but specifically as a particular cultural synthesis of other areas of knowledge and as a cultural perspective within and upon the other areas. Today I’d like to bring attention to three current topics that clearly deal with Indigenous Knowledge but, on consideration, deal equally with history, anthropology, and archeology. I’ve included links to supporting resources. 1. These selected articles from the Canadian Broadcasting Company provide background and arguments: Diana Laufenberg: How to learn? From mistakes.

11 Things I Learned In My First Year of Teaching. 5 Pieces of Advice for New Teachers. This woman shared that she's #DisabledAndCute. The internet reacted. Curriculum. Social Justice Education. Alternative schooling.