What Would You Do? Bike Theft (White Guy, Black Guy, Pretty Girl) The Smoke-Filled Room. If you were sitting in a waiting room and smoke began to billow out of a vent in the wall, you'd probably do something about it. 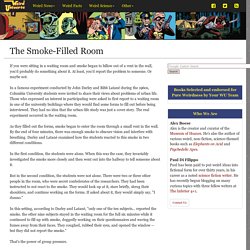 At least, you'd report the problem to someone. Or maybe not. In a famous experiment conducted by John Darley and Bibb Latané during the 1960s, Columbia University students were invited to share their views about problems of urban life. Those who expressed an interest in participating were asked to first report to a waiting room in one of the university buildings where they would find some forms to fill out before being interviewed. They had no idea that the urban-life study was just a cover story. As they filled out the forms, smoke began to enter the room through a small vent in the wall. In the first condition, the students were alone.

But in the second condition, the students were not alone. That's the power of group pressure. If you ever get the chance, check out Darley and Latané's book The Unresponsive Bystander: Why Doesn't He Help? The Bystander effect happens mainly because of 3 reasons. Diffusion of Responsibility - Definition and Examples - One Mind Therapy. Research on the Diffusion of Responsibility Many studies have looked at the bystander effect. 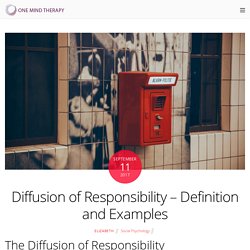 John Darley and Bibb Latané were two of the first psychologists to develop a diffusion of responsibility experiment. Following the murder of Kitty Genovese in the late 1960’s, Latané and Darley conducted studies investigating the effect. In their first and most well-known study, they looked at the relationship between group size and reporting danger. Study participants were asked to fill out a questionnaire in a room that was slowly filling with smoke. An interesting finding is that the phenomenon impacts groups of only three people.

Latané and Darley created a model of helping to describe the process through which individuals go before taking action. Pluralistic Ignorance (SOCIAL PSYCHOLOGY) - iResearchNet. Pluralistic Ignorance Definition Pluralistic ignorance occurs when people erroneously infer that they feel differently from their peers, even though they are behaving similarly.

As one example, imagine the following scenario: You are sitting in a large lecture hall listening to an especially complicated lecture. After many minutes of incomprehensible material, the lecturer pauses and asks if there are any questions. No hands go up. You look around the room. Another case of pluralistic ignorance that is familiar to many college students concerns drinking on campus. Pluralistic Ignorance and Social Dynamics. Kitty Genovese and The Bystander Effect. 10 Notorious Cases of the Bystander Effect. An avoidable murder of a student caught on tape: the sickening power of the bystander effect.

Khaseen Morris was told to show up outside the mall at a certain time by several others his age, after he was seen walking home the girlfriend of another boy. Morris showed up and was immediately attacked by a group of five teenagers. A senseless brawl erupted and Morris was stabbed repeatedly in the chest, dying later that night in the hospital. Bystander inaction, like 7-Eleven assault, more likely with more witnesses, experts say - Chicago Tribune. Phones turning us into apathetic bystanders, says top psychologist.

Smartphones are turning people into “apathetic bystanders” who would rather document unfolding events than help those in trouble, a London psychologist has warned. 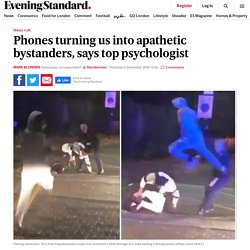 Dr Linda Papadopoulos said an obsession with filming incidents on mobile devices had turned people into “passive observers” instead of “active participants”. She made the comments after footage showing a man kung-fu-style kicking a female police officer into the path of a bus in the borough of Merton went viral online. Dr Papadopoulos told the Evening Standard: “Don’t just document — engage if you can help someone yourself, or by getting somebody. Be aware of your surroundings as an active participant, not just as a passive observer. Put the phone down, look around you sometimes.” Dr Papadopoulos, who is based in Ladbroke Grove, warned modern society was turning into one where people are “watching and telling on each other all the time”.

Two men have since been charged with ABH, which they both deny. Breaking the silence - preventing harassment and sexual misconduct. Be an Active Bystander We can all be bystanders. Every day events unfold around us. At some point, we will register someone in danger. When this happens, we will decide to do or say something (and become an active bystander), or to simply let it go (and remain a passive bystander). 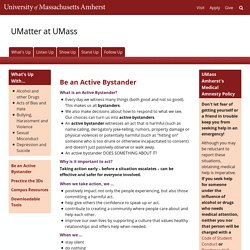 Every day we witness many things (both good and not so good). This makes us all bystanders. We also make decisions about how to respond to what we see. Our choices can turn us into active bystanders. An active bystander witnesses an act that is harmful (such as name-calling, derogatory joke-telling, rumors, property damage or physical violence) or potentially harmful (such as “hitting on” someone who is too drunk or otherwise incapacitated to consent) and doesn’t just passively observe or walk away. Why is it important to act? Taking action early – before a situation escalates – can be effective and safer for everyone involved. When we take action, we … positively impact not only the people experiencing, but also those committing a harmful act.