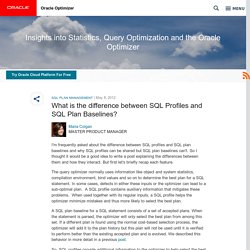 So I thought it would be a good idea to write a post explaining the differences between them and how they interact. But first let's briefly recap each feature. The query optimizer normally uses information like object and system statistics, compilation environment, bind values and so on to determine the best plan for a SQL statement. The Tom Kyte Blog: Something about nothing... Something about nothing. 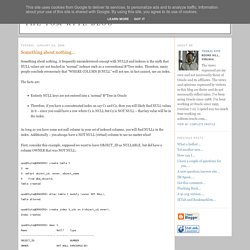 A frequently misunderstood concept with NULLS and indexes is the myth that NULL values are not tracked in “normal” indexes such as a conventional B*Tree index. Therefore, many people conclude erroneously that “WHERE COLUMN IS NULL” will not use, in fact cannot, use an index. Optimizer Access Paths. The database stores rows in data blocks. 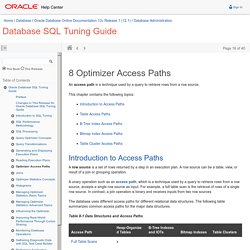 In tables, the database can write a row anywhere in the bottom part of the block. Oracle Database uses the block overhead, which contains the row directory and table directory, to manage the block itself. An extent is made up of logically contiguous data blocks. Tanel Poder's Performance & Troubleshooting blog. ORACLE-BASE - Stored Outlines and Plan Stability. Tracking Performance Problems – Inserting a Hint into SQL in a Compiled Program. December 18, 2009 What follows is part of a presentation that I gave in 2008. 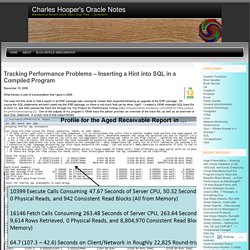 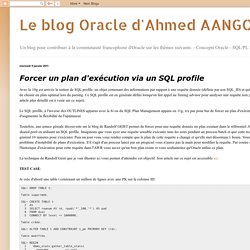 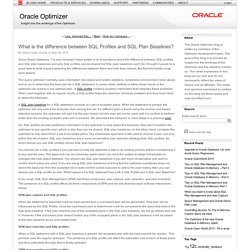 So I thought it would be a good idea to write a post explaining the differences between them and how they interact. But first let's briefly recap each feature. The query optimizer normally uses information like object and system statistics, compilation environment, bind values and so on to determine the best plan for a SQL statement. Interpreting Explain plan. What's an explain plan? 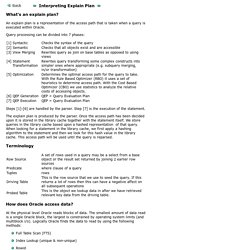 An explain plan is a representation of the access path that is taken when a query is executed within Oracle. Query processing can be divided into 7 phases: Steps [1]-[6] are handled by the parser. Time Model. Tasks that are performed via jobs in the database will be double accounted in the system time model that has been introduced with Oracle 10g. 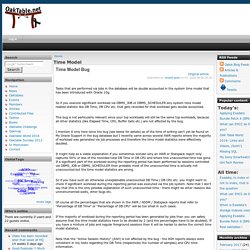 So if you execute significant workload via DBMS_JOB or DBMS_SCHEDULER any system time model related statistic like DB Time, DB CPU etc. that gets recorded for that workload gets double accounted. This bug is not particularly relevant since your top workloads will still be the same top workloads, because all other statistics (like Elapsed Time, CPU, Buffer Gets etc.) are not affected by the bug.

I mention it only here since the bug (see below for details) as of the time of writing can't yet be found on My Oracle Support in the bug database but I recently came across several AWR reports where the majority of workload was generated via job processes and therefore the time model statistics were effectively doubled. DBMS_XPLAN. The DBMS_XPLAN package provides an easy way to display the output of the EXPLAIN PLAN command in several, predefined formats. 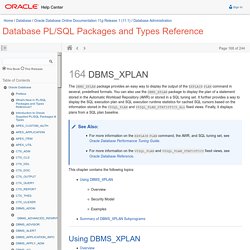 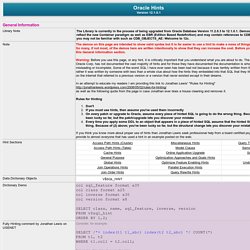 Influencing the Optimizer. Use hints to influence the optimizer mode, query transformation, access path, join order, and join methods. For example, The following figure shows how you can use a hint to tell the optimizer to use a specific index for a specific statement. The advantage of hints is that they enable you to make decisions normally made by the optimizer. In a test environment, hints are useful for testing the performance of a specific access path. For example, you may know that an index is more selective for certain queries, as in Figure 14-2.

Look into the data provided by the v$sql view: HASH_VALUE, ADDRESS, CHILD_ADDRESS, SQL_ID, EXACT_MATCHING_SIGNATURE, FORCE_MATCHING_SIGNATURE... It may be difficult to know if one ID is the same, will another ID be same as well?