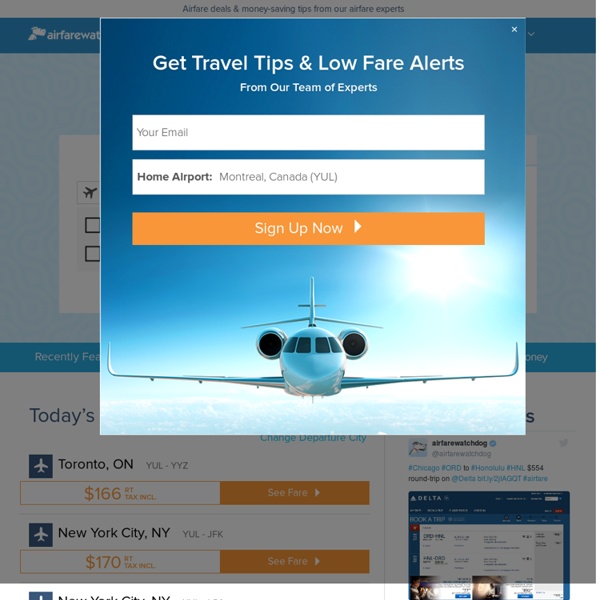 Related:  Plan it / Book it

Leftover Loot Since 9/11, the Transportation Security Administration has collected tons of items at security checkpoints; in 2006 alone, screeners took in more than 13 million items. What happens to all that stuff? The TSA turns it over to state surplus property agencies, which tend to sell it online or at retail stores. (Sometimes the contraband is sold in bulk.) Lifestyle We will never tire of the positive effects of nature. Its calming, soothing and inspiring influence will never go out of style. The more we rush, the more time we spend indoors staring at our screens and devices, the more urban our lifestyles become, the more we crave and need time away from it all. Yabbedoo Travel Matador’s travel suggestions for those concerned about the ongoing violence in Mexico. IN 2008, WHEN I told a good friend of mine, whose mother is Mexican, that I was planning a five-week stay in Mexico City, his response was something along the lines of a sardonic, “Good luck.” This attitude wasn’t based on any firsthand experience — to my knowledge, he’d never spent time in the DF, and it’d been years since he’d been in-country.

The 20 Best Travel Websites on the Internet - Golden Book Traveler Update: Visit the 2012 version of The 20 Best Travel Websites on the Internet I hope that everyone who attended my SXSW Core Conversation panel on How to Make Money Traveling Around the World enjoyed the presentation. As promised, I have a listing of my top 20 favorite travel websites (in no particular order). I’m still working on my eBook “70 Vacations in 7 Months“. Carrying off the art of one carry-on Phileas Fogg had Passepartout, Bertie Wooster had Jeeves and Sir Edmund Hillary had a retinue of stalwart Sherpas. The rest of us, alas, must schlep our own bags. That's the best reason to pack light, but it's not the only one.

Gondar travel guide Gondar's 17th century royal castle Gondar (also spelled Gonder) is a royal and ancient historical city of Ethiopia. It was the home of many emperors and princesses who led the country from the 12th century to the last decade of the 20th century, including Emperor Suseneos, Emperor Fasiledes, Empress Mentwab, Iyasu I, Tewodros II and Empress Taitu.

23 Best Travel Sites to Save You Money Find the best deals online for plane tickets, hotel rooms, vacation packages and car rentals, domestic or abroad. Feeling too pinched by the ever-troubled economy to travel? You can still find good deals to get away — if you know where to go online first. Here are the best travel sites we've found to help you bag the best bargains on airfares, lodging, car rentals and all your other travel needs. Note: All but one of the following sites are free to use. 1) Kayak.com scours hundreds of online sources for the cheapest fare available.