Emergency Contraception: Plan B. Obama Administration Claims Plan B Could Be Too 'Dangerous' For Young Women To Use Correctly. On Friday, a federal judge struck down the Obama Administration’s decision to restrict access to emergency contraception for Americans under 17 years old, ruling that Plan B should be available over the counter for women of all ages. 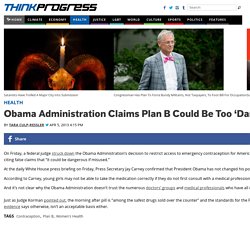 Judge Edward R. Korman criticized the Administration’s “politically-motivated effort” to placate religious conservatives and prevent young women from accessing an extremely safe contraceptive method. Nevertheless, the White House is standing by its policy to require young women to obtain a prescription for Plan B, citing false claims that “it could be dangerous if misused.” At the daily White House press briefing on Friday, Press Secretary Jay Carney confirmed that President Obama has not changed his position on restricting access to Plan B for women younger than 17. According to Carney, young girls may not be able to take the medication correctly if they do not first consult with a medical professional. Is Emergency Contraception Safe? - Morning After Pill. Not only could EC kill a tiny preborn life in its earliest stages, but the 'morning-after' pill is also very dangerous to a woman's health. 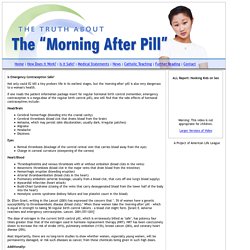 If one reads the patient information package insert for regular hormonal birth control (remember, emergency contraception is a mega-dose of the regular birth control pill), one will find that the side effects of hormonal contraceptives include: Head/Brain Cerebral hemorrhage (bleeding into the cranial cavity)Cerebral thrombosis (blood clot that drains blood from the brain)Melasma, which may persist (skin discoloration; usually dark, irregular patches) Migraine Headache Dizziness Eyes Retinal thrombosis (blockage of the central retinal vein that carries blood away from the eye)Change in corneal curvature (steepening of the cornea) Heart/Blood Dr.

The dose of estrogen in the current birth control pill, which is erroneously billed as "safe", has potency four times greater than that of the estrogen used in hormone replacement therapy (HRT). Additionally: The Dangers of the Morning-After Pill. In the mid-nineties, the World Health Organization (WHO) began to realize that increased access to routine methods of contraception led to increased rates of abortion. 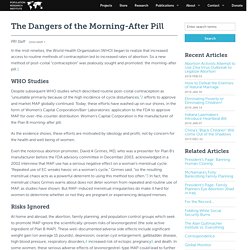 So a new method of post-coital “contraception” was zealously sought and promoted: the morning-after pill.1 WHO Studies Despite subsequent WHO studies which described routine post-coital contraception as “unsuitable primarily because of the high incidence of cycle disturbances,”2 efforts to approve and market MAP globally continued. Today, these efforts have washed up on our shores, in the form of Women’s Capital Corporation/Barr Laboratories’ application to the FDA to approve MAP for over-the-counter distribution. The Dangers of the Morning-After Pill. Pharmacist says Plan B morning-after pill and its generic copycats are dangerous for young girls. AUSTRALIA, February 5, 2016 (LifeSiteNews) -- A 26-year-old Australian mom has given birth to five healthy babies, all conceived naturally, after refusing the doctor’s advice that she must abort three of them in order to give the remaining two a better chance at life. 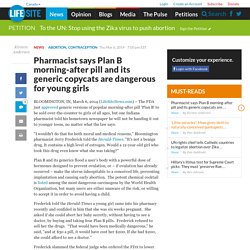 “After my initial ultrasound I was told I could consider the selection method to give 2 babies the best chance in life,” wrote mom Kim Tucci in a Facebook post last September. “I watched a YouTube video on the procedure and I cried. I could never do that! Was I selfish for not giving two the chance of 100% survival? All I knew is that I already love them and that every heart beat I heard I connect with them more. Last Thursday Kim and her husband Vaughn welcomed the five new members into their family — one boy and four girls —increasing the number of their children from 3 to 8. The quintuplets’ story began last March, after Kim and Vaughn had been trying for six months to conceive just one more child for their family. Plan B (Morning-After Pill) Uses, Side Effects & Warnings. Generic Name: levonorgestrel emergency contraceptive (LEE voe nor jes trel)Brand Names: Next Choice, Plan B, Plan B One-Step What is Plan B? 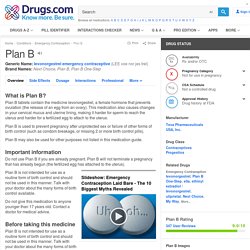 Plan B tablets contain the medicine levonorgestrel, a female hormone that prevents ovulation (the release of an egg from an ovary). This medication also causes changes in your cervical mucus and uterine lining, making it harder for sperm to reach the uterus and harder for a fertilized egg to attach to the uterus. Plan B is used to prevent pregnancy after unprotected sex or failure of other forms of birth control (such as condom breakage, or missing 2 or more birth control pills). Plan B may also be used for other purposes not listed in this medication guide. Important information. Plan B (Morning-After Pill): Effectiveness and Side Effects. Plan B One-Step is a type of emergency contraception. 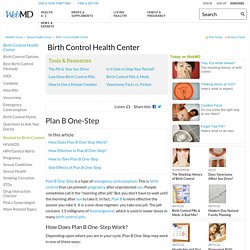 This is birth control that can prevent pregnancy after unprotected sex. People sometimes call it the "morning after pill. " But you don't have to wait until the morning after sex to take it. In fact, Plan B is more effective the sooner you take it. Emergency Contraception. Oct 01, 2014 Emergency contraception (EC), sometimes referred to as “the morning-after pill,” is a form of backup birth control that can be taken up to several days after unprotected intercourse or contraceptive failure and still prevent a pregnancy. 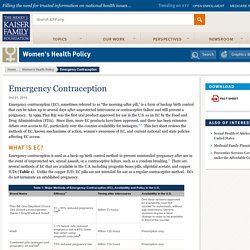 In 1999, Plan B® was the first oral product approved for use in the U.S. as an EC by the Food and Drug Administration (FDA). Since then, more EC products have been approved, and there has been extensive debate over access to EC, particularly over-the-counter availability for teenagers., This fact sheet reviews the methods of EC, known mechanisms of action, women’s awareness of EC, and current national and state policies affecting EC access. 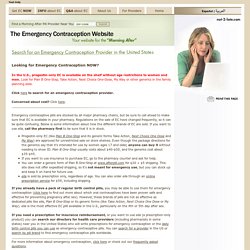 In the U.S., progestin-only EC is available on the shelf without age restrictions to women and men. Look for Plan B One-Step, Take Action, Next Choice One-Dose, My Way or other generics in the family planning aisle. Plan B One-Step® (levonorgestrel 1.5 mg)