- The Washington Post. Forget GDP – for the 21st century we need a modern economic measure. It is critically important we monitor societal progress and design responsive policies to 21s- century challenges, such as climate change, the marginalization of more than a billion people, resource depletion and emerging pollution-driven health crises. 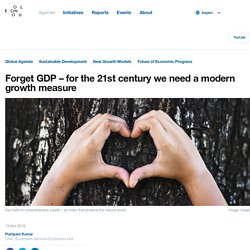 We need reliable metrics to know how we are performing on the yardsticks of our economy, sustainability and social harmony. Unfortunately, our radar to track progress is far from satisfactory. Countries still use a 20th-century metric to measure wellbeing: Gross Domestic Product, or GDP. GDP provides measurements of output, income and expenditure quite well, and these are needed to understand and devise fiscal and monetary policies. But this measure flatly fails when it comes to wellbeing. Black Friday is right: our relentless consumption is trashing the planet.

Everyone wants everything – how is that going to work? 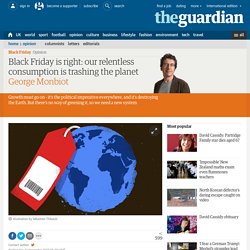 The promise of economic growth is that the poor can live like the rich and the rich can live like the oligarchs. But already we are bursting through the physical limits of the planet that sustains us. Climate breakdown, soil loss, the collapse of habitats and species, the sea of plastic, insectageddon: all are driven by rising consumption. The promise of private luxury for everyone cannot be met: neither the physical nor the ecological space exists. But growth must go on: this is everywhere the political imperative.

With every generation, the baseline of normalised consumption shifts. Every Friday is a Black Friday, every Christmas a more garish festival of destruction. The ancillary promise is that, through green consumerism, we can reconcile perpetual growth with planetary survival. Why? How to Shrink the Economy without Crashing It: A Ten-Point Plan Post Carbon Institute. The human economy is currently too big to be sustainable. 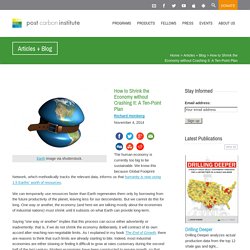 We know this because Global Footprint Network, which methodically tracks the relevant data, informs us that humanity is now using 1.5 Earths’ worth of resources. We can temporarily use resources faster than Earth regenerates them only by borrowing from the future productivity of the planet, leaving less for our descendants. But we cannot do this for long. One way or another, the economy (and here we are talking mostly about the economies of industrial nations) must shrink until it subsists on what Earth can provide long-term. Saying “one way or another” implies that this process can occur either advertently or inadvertently: that is, if we do not shrink the economy deliberately, it will contract of its own accord after reaching non-negotiable limits. Jevons' Paradox. 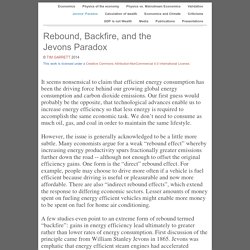 Our first guess would probably be the opposite, that technological advances enable us to increase energy efficiency so that less energy is required to accomplish the same economic task. We don’t need to consume as much oil, gas, and coal in order to maintain the same lifestyle. However, the issue is generally acknowledged to be a little more subtle. Many economists argue for a weak “rebound effect” whereby increasing energy productivity spurs fractionally greater emissions further down the road -- although not enough to offset the original efficiency gains. Comparison with mainstream  economic growth models.

It is important to compare any physics-based model with more mainstream macroeconomic growth models that do not explicitly appeal to physical principles, and it would be nice to think that the two approaches can be reconciled. 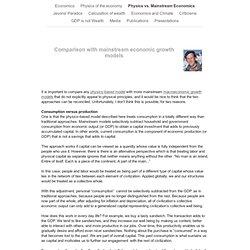 Unfortunately, I don’t think this is possible, for two reasons. Consumption versus production One is that the physics-based model described here treats consumption in a totally different way than traditional approaches. Mainstream models selectively subtract household and government consumption from economic output (or GDP) to obtain a capital investment that adds to previously accumulated capital. Economics as if the Laws of Thermodynamics Mattered. By David Jones There is no wealth but life. 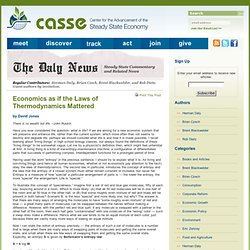 –John Ruskin Have you ever considered the question: what is life? If we are aiming for a new economic system that will preserve and enhance life, rather than the current system, which more often than not seems to destroy and degrade life, perhaps we should consider what life is and how it is made possible. I recall learning about “living things” in high school biology classes, but always found the definitions of these “living things” to be somewhat vague. Having used the word “entropy” in the previous sentence, I should try to explain what it is. To illustrate this concept of “specialness,” imagine first a set of red and blue gas molecules, fifty of each say, bouncing around in a room. S = k log W Boltzmann's tomb, with his famous entropy law above the bust That little equation of Boltzmann’s explains a huge number of phenomena. Another example: why do balls bounce lower and lower, but never start bouncing higher and higher?

David A. Freedom this time. Economic Theology: Angels Dancing on the Head of a Pin. By David A. 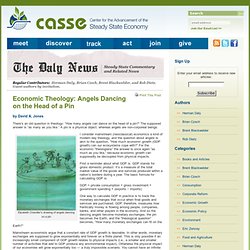 Jones There’s an old question in theology: “How many angels can dance on the head of a pin?” The supposed answer is “as many as you like.” A pin is a physical object, whereas angels are non-corporeal beings. Elizabeth Chandler's drawing of angels dancing on a pin I consider mainstream (neoclassical) economics a kind of modern day theology, and the question about angels is akin to the question, “How much economic growth (GDP growth) can our ecosystems cope with?” First a reminder about what GDP is. GDP = private consumption + gross investment + government spending + (exports − imports)