Future Timeline - Technology. 10 Futurist Predictions. As the world gets smaller by sharing more and more of the same cyberspace and social tools, we are, like it or not, becoming a bigger collective target for the bad guys. 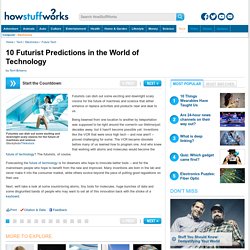 While our data puts us all "out there" in many ways, that same data enables those involved in dark networks and activities to get lost and take on false, covert identities in order to plan bigger and bigger attacks. Anonymous is one such dark group involved in "hactivism," having found its way into sensitive stores of information from the likes of the FBI, Visa and Mastercard, and government Web sites from the U.K. to China, causing large-scale, disabling computer terror.

It functions as a collective of many individuals and spreads its login and computer activities thin enough to lead authorities in too many directions to track, and its acts target everything from politics to commerce. Inventors & Inventions ChCh City Libraries. We have expanded and updated our list of inventors and their inventions and created some groupings to make it easier for you to find the information that you are looking for. 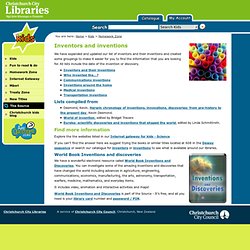 All lists include the date of the invention or discovery. Lists compiled from Explore the the websites listed in our Internet gateway for kids - Science If you can’t find the answer here we suggest trying the books or similar titles located at 608 in the Dewey sequence or search our catalogue for inventors or inventions to see what is available around our libraries. World Book Inventions and discoveries We have a wonderful electronic resource called World Book Inventions and Discoveries. It includes video, animation and interactive activities and maps! World Book Inventions and Discoveries is part of the Source - It’s free, and all you need is your library card number and password / PIN. Papers Past Inventions. DigitalNZ Inventors Images. Sweet Search. You Tube NZ Inventors. Books in the library. Famous New Zealanders ChCh City Libraries. Many Answers. NZHistory Online.

Legends — World-changing New Zealanders. Featuring 40+ definitive short biographies of New Zealanders who have changed or benefitted the world in some way. 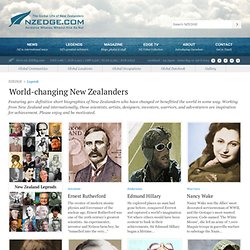 Working from New Zealand and internationally, these scientists, artists, designers, inventors, warriors, and adventurers are inspiration for achievement. Please enjoy and be motivated. Scientists Ernest Rutherford The creator of modern atomic physics and forerunner of the nuclear age, Ernest Rutherford was one of the 20th century's greatest scientists. Endurance Edmund Hillary He explored places no man had gone before, conquered Everest and captured a world’s imagination. 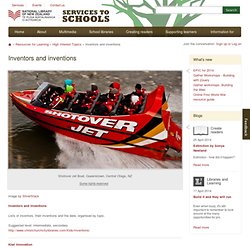