43 Technetium. Dmitriy Mendeleev Online. Dmitri Mendeleev. Born in Siberia, the last of at least 14 children, Dmitri Mendeleev revolutionized our understanding of the properties of atoms and created a table that probably adorns every chemistry classroom in the world. 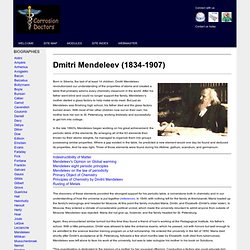 After his father went blind and could no longer support the family, Mendeleev’s mother started a glass factory to help make ends meet. But just as Mendeleev was finishing high school, his father died and the glass factory burned down. With most of her other children now out on their own, his mother took her son to St. Petersburg, working tirelessly and successfully to get him into college. In the late 1860's, Mendeleev began working on his great achievement: the periodic table of the elements.

The discovery of these elements provided the strongest support for his periodic table, a cornerstone both in chemistry and in our understanding of how the universe is put together (reference). "This investigation is dedicated to the memory of a mother by her youngest offspring. Dmitri Mendeleev ~ History of the periodic table. Mendeleev provided for variance from strict atomic weight order, left space for new elements, and predicted three yet-to-be-discovered elements including eke-silicon and eke-boron. 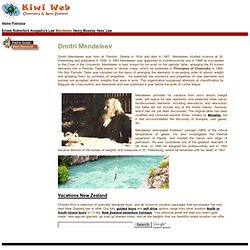 His table did not include any of the Noble Gases, however, which had not yet been discovered. The original table has been modified and corrected several times, notably by Moseley, but it had accommodated the discovery of isotopes, rare gases, etc. Mendeleev anticipated Andrews' concept (1869) of the critical temperature of gases. He also investigated the thermal expansion of liquids, and studied the nature and origin of petroleum. He was considered one of the greatest teachers of his time. Choose from a selection of specially designed tours and all inclusive vacation packages that encompass the very best New Zealand has to offer. Custom Search. Chemical Elements. Technetium Uses. Technetium - Overview, Discovery and naming, Physical properties. Photo by: concept w Overview Technetium is the only element below uranium that does not exist on Earth. 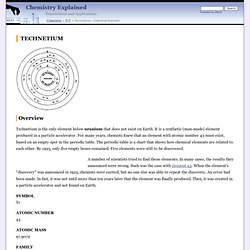 It is a synthetic (man-made) element produced in a particle accelerator. For many years, chemists knew that an element with atomic number 43 must exist, based on an empty spot in the periodic table. The periodic table is a chart that shows how chemical elements are related to each other. A number of scientists tried to find those elements. SYMBOL Tc FAMILY Group 7 (VIIB) Transition metal PRONUNCIATION tek-NEE-she-um Today, technetium has very few—but very important—uses.

Discovery and naming In the 1920s, a team of researchers were looking for elements with atomic numbers 43 and 75. So, chemists kept looking for element 43. Element 43 was found by Italian physicist Emilio Segre (1905-89) and his colleague Carlo Perrier. Physical properties Technetium is a silver-gray metal with a melting point of 2,200°C (4,000°F) and a density of 11.5 grams per cubic centimeter. 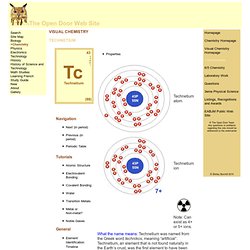 Technetium, an element that is not found naturally in the Earth’s crust, was the first element to have been artificially produced. Who identified technetium? Mendeleev’s periodic table had a place for element # 43. However, no element had been identified that fitted into the position # 43 in the table. Claims from chemists that element # 43 had been identified (in 1877, 1896 and 1908) were proved to be incorrect. In 1939, two Italian scientists working in Sicily, Emilio Segrè and Carlo Perrier, obtained a sample of radio-active molybdenum from Ernest Lawrence, a physicist working in the USA. It&#039;s Elemental - The Element Technetium. [Click for Isotope Data] Atomic Number: 43 Atomic Weight: 98 Melting Point: 2430 K (2157°C or 3915°F) Boiling Point: 4538 K (4265°C or 7709°F) 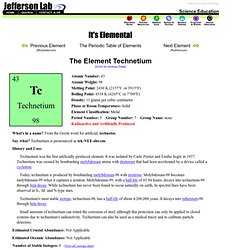 Technetium. A red giant star. Technetium was once thought to exist only in samples produced in the laboratory. Its spectral lines have now been observed in red giant stars. Tiny amounts also exist in uranium ores. Image by NASA/ESA. (1) Data Zone. Chemistry : Periodic Table : technetium : key information. Technetium: the essentials Since its discovery, searches for the element technetium in terrestrial materials have been made without success.

Technetium has been found in the spectrum of S-, M-, and N-type stars, and its presence in stellar matter is leading to new theories of the production of heavy elements in the stars. Technetium is a silvery-grey metal that tarnishes slowly in moist air. Until 1960, technetium was available only in small amounts. The chemistry of technetium is related to that of rhenium. Technetium. The elements of the periodic table sorted by the discovery year. Discovery Date. Discoveries of the chemical elements - Wikipedia, the free encyc. A Periodic Table of the Elements at Los Alamos National Laborato. Periodic Table - WebElements : historical information : Periodic. Timeline of Element Discovery - History of Chemistry. History of the Elements of the Periodic Table. Creative Chemistry AS and A Level Stuff. 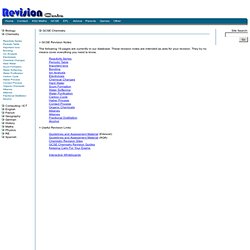