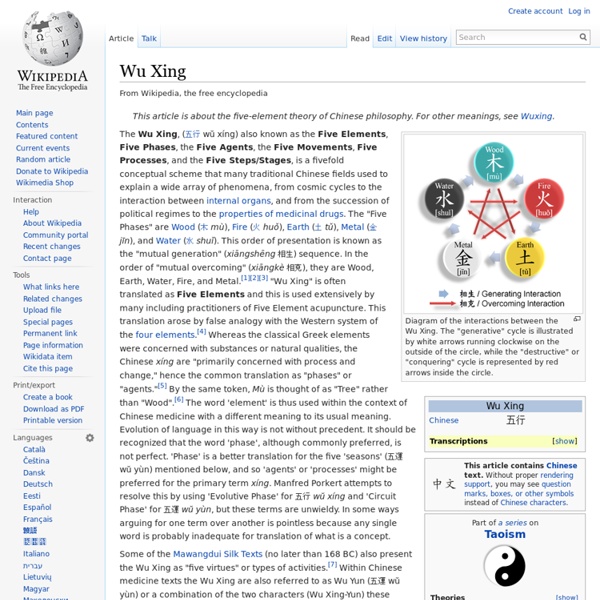 Diagram of the interactions between the Wu Xing. The "generative" cycle is illustrated by white arrows running clockwise on the outside of the circle, while the "destructive" or "conquering" cycle is represented by red arrows inside the circle. Some of the Mawangdui Silk Texts (no later than 168 BC) also present the Wu Xing as "five virtues" or types of activities.[7] Within Chinese medicine texts the Wu Xing are also referred to as Wu Yun (五運 wŭ yùn) or a combination of the two characters (Wu Xing-Yun) these emphasise the correspondence of five elements to five 'seasons' (four seasons plus one). Another tradition refers to the wŭ xíng as wŭ dé 五德, the Five Virtues (zh:五德終始說). The system of five phases was used for describing interactions and relationships between phenomena. The Phases[edit] The five phases are usually used to describe the state in nature: Cycles[edit] Inter-promoting (mother/son)Inter-acting (grandmother/grandson)Over-acting (kè cycle)Counter-acting (reverse kè) Bagua[edit]

Feng Shui Shopper Marina Lighthouse and Feng Shui Shopper presents Monthly Treasures March/April 2014 Feng Shui Newsletter “How a person masters his fate is more important than what his fate is.”~ Karl Wilhelm von Humboldt Divination and Inspiration: The I Ching A great source of guidance can be found in one of the oldest books on earth; the I Ching or Book of Changes. Ultimately this became a system based on the energy movements of Yin represented by broken lines and Yang solid lines. How to Use The I Ching or The Book of Changes for Divination Through the years readings were condensed to tossing three coins. ). ). The hexagram is divided into two trigrams; the bottom three lines are called the lower trigram; the top three lines are the upper trigram; together they create the 64 hexagrams below. Find the number and then look up the meaning here. The I Ching or Book of Changes is a wonderful resource to help understand the ebbs and flows of life. H. Enjoy and have a beautiful blossoming productive Spring!