Astrology's Element (Earth, Air, Water, Fire) Article. Hybrid Creatures of the Ancient Greek World. Astro Sundial. Google Image Result for. Chinese Astrology - Zi Wei Dou Shu ★《紫微斗数》 The Stems and Branches 天干地支「Tiān Gān Dì Zhī 」, or in short, 干支 「Gān Zhī 」 , is the most significant counting system in the Chinese Calendar.Its history goes back to even before the invention of Chinese characters.Stem-Branch symbols were found on ancient Chinese Oracle Bones or 甲骨文. 10 Heavenly Stems 天干 「Tiān Gān 」 Initially, the stems were created to count the DAY only.For example, the 1st day is 甲, 2nd day is 乙 .....the 10th day is 癸, and the11th day goes back to 甲 and so on. 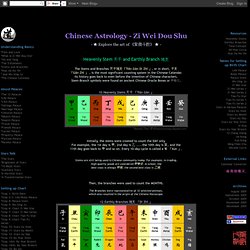 Every 10-day cycle is called a 旬 「Xún 」. Stems are still being used in Chinese community today. For example, in trading, high-quality goods are considered 甲等货. Secret Teachings of All Ages: The Pythagorean Theory of Music and Color. Index Previous Next HARMONY is a state recognized by great philosophers as the immediate prerequisite of beauty. 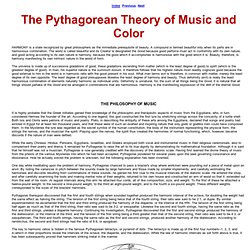 A compound is termed beautiful only when its parts are in harmonious combination. The world is called beautiful and its Creator is designated the Good because good perforce must act in conformity with its own nature; and good acting according to its own nature is harmony, because the good which it accomplishes is harmonious with the good which it is. The Elemental Dignities Dictionary - The Introduction To The Tarot Elements Visual Guide To Studying Elemental Dignities. Promoting the study and application of Elemental Dignities in Tarot readings was one of the reasons I began writing my Tarot blog. 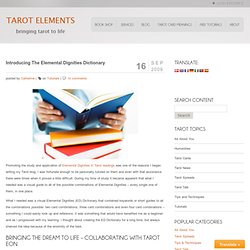 It was something that would have benefited me as a beginner and as I progressed with my learning. I thought about creating the ED Dictionary for a long time, but always shelved the idea because of the enormity of the task. Polychromies Secrètes. Crucifixion of the Parliament of Toulouse, detail of the medallion of Saint Mark, after restoration. 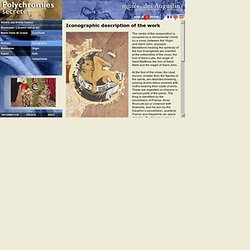 Détail. Crucifixion of the Parliament of Toulouse, detail of cortege, after restoration. Détail. The Four Elements. The four elements and the fifth hidden element Our forefathers referred to five elements, four that can be changed and experienced by the five senses and a fifth that represents space, a vast emptiness or a spirit that cannot be sensed by the four senses and cannot be changed. 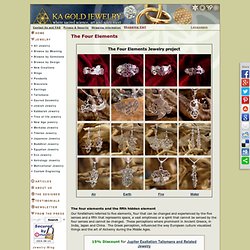 These perceptions where prominent in Ancient Greece, in India, Japan and China. The 4 Elements. 4 Elements ( 4 Corners ) The Four Elements. Symbolically, the number four finally brings us to the level of manifestation, matter and substance. 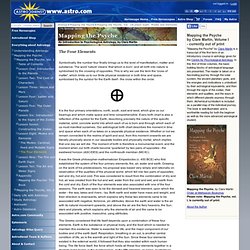 The word 'nature' means 'that which is born', and all birth into nature is symbolised by the crossing of opposites. This is why we use the term the 'cross of matter', which limits us to our finite physical existence in both time and space, symbolised by the symbol for the Earth itself - the cross within the circle: It is the four primary orientations, north, south, east and west, which give us our bearings and which make space and time comprehensible.

Every birth chart is also a reflection of the symbol for the Earth, describing precisely the nature of the specific material, solid, concrete world into which each of us is born and through which each of us must manifest ourselves. Our astrological birth chart describes the moment in time and space when each of us takes on a separate physical existence.

Audience: Sorry, Clare, but you mentioned five elements, not four. Clare: Yes. Golden Dawn Research Center - The Four Elements in the Western Tradition. Numerous astrological and metaphysical books give the impression that the Elements are more fundamental than the Twelve Signs of the Zodiac, because the Signs can be broken down into groups of four elements. 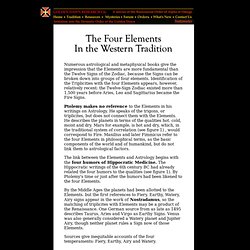 Identification of the Triplicities with the four Elements appears, however, relatively recent: the Twelve-Sign Zodiac existed more than 1,500 years before Aries, Leo and Sagittarius became the Fire Signs. Ptolemy makes no reference to the Elements in his writings on Astrology. The Four Temperaments. Around 500 years before the birth of our Savior, the spirit of science began to be applied to the practice of medicine. 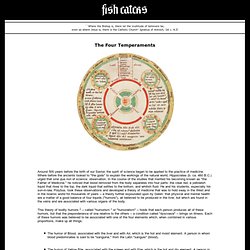 Where before the ancients looked to "the gods" to explain the workings of the natural world, Hippocrates (b. ca. 460 B.C.) urged that sine qua non of science: observation. In the course of the studies that merited his becoming known as "the Father of Medicine," he noticed that blood removed from the body separates into four parts: the clear red, a yellowish liquid that rises to the top, the dark liquid that settles to the bottom, and whitish fluid. This theory of bodily humors 1 -- called "humorism " or "humoralism" -- holds that each person produces all of these humors, but that the preponderance of one relative to the others -- a condition called "dyscrasia" -- brings on illness.

The 8 Trigrams. The Ba Gua diagram (literally 8 houses, also spelled as Pa Kua) is the basic tool for tool for Feng Shui analysis. When a Feng Shui analysis is performed, the practitioner refers to these basic concepts to analyze the situation within each area of the building. From this representation, the basis of the mathematical calculations are found. In other words, it is a tool for calculating the attributes of a building, not a general overlay to be used on a floor plan. Ba gua. The bagua (Chinese: 八卦; literally "eight symbols") are eight trigrams used in Taoist cosmology to represent the fundamental principles of reality, seen as a range of eight interrelated concepts. 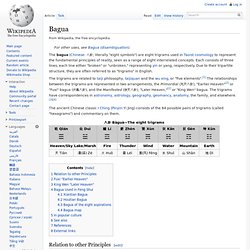 Each consists of three lines, each line either "broken" or "unbroken," representing yin or yang, respectively. Due to their tripartite structure, they are often referred to as "trigrams" in English. The ancient Chinese classic I Ching (Pinyin:Yi Jing) consists of the 64 possible pairs of trigrams (called "hexagrams") and commentary on them. Relation to other Principles[edit] Yin Yang elements. Early Development of Atomic Theory. Okanagan First Peoples- Ecology. The Syilx perspective on Earth ecology has some similarities to the wide spread belief in society that there are four elements-Earth, Air, Fire and Water. 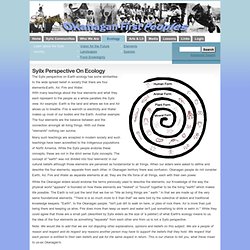 With many teachings about the four elements and what they each represent to the people as a whole parallels the Syilx view. An example: Earth is the land and where we live and Air allows us to breathe. Wu Xing. Wu Xing picture by lovelymokona - Photobucket. Map: Chan Dào (ZENTAO) - Yin Yang - Wu Xing - Yi Jing. TripAtlas.com. Wu Xing. Wu Xing - Chinese Philosophy. Chinese Philosophy |Yin and Yang|The Bagua (8 Trigrams)|Wu Xing (5 Moments) Five Directions. Template:Classic element. Aether (classical element) According to ancient and medieval science, aether (Greek: αἰθήρ aithēr[1]), also spelled æther or ether, also called quintessence, is the material that fills the region of the universe above the terrestrial sphere. [citation needed] The concept of aether was used in several theories to explain several natural phenomena, such as the traveling of light and gravity. In the late 19th century, physicists postulated that aether permeated all throughout space, providing a medium through which light could travel in a vacuum, but evidence for the presence of such a medium was not found in the Michelson–Morley experiment.[2]

Classical 4 elements. Segment of the macrocosm showing the elemental spheres of terra (earth), aqua (water), aer (air), and ignis (fire). Robert Fludd. 1617. Many philosophies and worldviews have a set of classical elements believed to reflect the simplest essential parts and principles of which anything can consist or upon which the constitution and fundamental powers of everything are based. Most frequently, classical elements refer to ancient concepts which some science writers compare to the modern states of matter, relating earth to the solid state, water to liquid, air to gaseous and fire to plasma.[1][2] Historians trace the evolution of modern theory pertaining to the chemical elements, as well as chemical compounds and mixtures of chemical substances to medieval, and Greek models.

Many concepts once thought to be analogous, such as the Chinese Wu Xing, are now understood more figuratively. Ancient[edit]