Water and Its Solutions. PeriodicTable.pdf. Explore_2ST.pdf. Periodic Table of the Elements by WebElements. P Table Families Groups. Dmitri Mendeleev. Dmitri Mendeleev revolutionized our understanding of the properties of atoms and created a table that probably embellishes every chemistry classroom in the world. 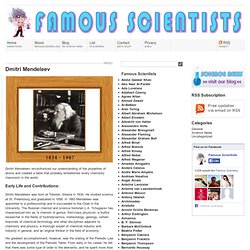 Early Life and Contributions: Dmitri Mendeleev was born at Tobolsk, Siberia in 1834. He studied science at St. Petersburg and graduated in 1856. In 1863 Mendeleev was appointed to a professorship and in succeeded to the Chair in the University. His greatest accomplishment, however, was the stating of the Periodic Law and the development of the Periodic Table. Legacy: Mendeleev was one of the first modern-day scientists in that he did not depend completely on his own work but rather was in correspondence with scientists around the world in order to receive data that they had collected. Besides his work on general chemical concepts as discussed earlier, Mendeleev spent much of his time working to improve technological advances of Russia. This work had been commissioned by the Russian Navy, which however did not adopt its use. 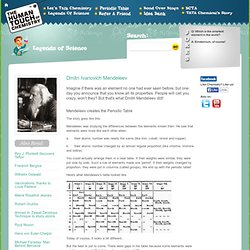 People will call you crazy, won't they? But that's what Dmitri Mendeleev did! Mendeleev creates the Periodic Table The story goes like this. Mendeleev was studying the differences between the elements known then. A. their atomic number was nearly the same (like iron, cobalt, nickel and copper) b. their atomic number changed by an almost regular proportion (like chlorine, bromine and iodine) You could actually arrange them in a neat table. Here's what Mendeleev's table looked like: Today of course, it looks a bit different. But the best is yet to come. Mendeleev predicts new elements! He actually predicted that these gaps would be filled by elements yet to be discovered. ...and gets proved right! No one believed Mendeleev until a French chemist called Emile Lecoq came along. The genius of Mendeleev’s periodic table - Lou Serico. Beryllium Video.

The genius of Mendeleev's periodic table - Lou Serico. Periodic Table of the Elements. The NEW Periodic Table Song (In Order) Lyrics There’s Hydrogen and Helium Then Lithium, Beryllium Boron, Carbon everywhere Nitrogen all through the air With Oxygen so you can breathe And Fluorine for your pretty teeth Neon to light up the signs Sodium for salty times Magnesium, Aluminium, Silicon Phosphorus, then Sulfur, Chlorine and Argon Potassium, and Calcium so you’ll grow strong Scandium, Titanium, Vanadium and Chromium and Manganese CHORUS This is the Periodic Table Noble gas is stable Halogens and Alkali react agressively Each period will see new outer shells While electrons are added moving to the right Iron is the 26th Then Cobalt, Nickel coins you get Copper, Zinc and Gallium Germanium and Arsenic Selenium and Bromine film While Krypton helps light up your room Rubidium and Strontium then Yttrium, Zirconium. 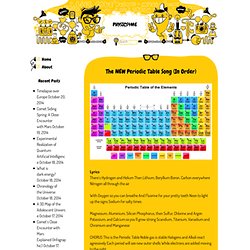 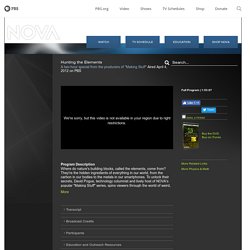 You have created fire! I could feel that puppy! How much gold is in 400 tons of dirt? MIKE LASSITER (Refinery Supervisor, Barrick Gold Corporation): There's about a million and a half dollars there. DAVID POGUE: Oh, man! Watch out with the hammer. LAWRENCE L. DAVID POGUE: We live in a world of incredible material variety. Yet everything we know, the stars, the planets and life, itself, comes from about 90 basic building blocks,… You have a periodic table table. …all right here, on this remarkable chart: the periodic table of the elements. It's a story that begins with the Big Bang and eventually leads to us. Manganese! And we're made, almost entirely, of just a handful of ingredients, including one that burns with secret fire inside us all. Join me as I explore the basic building blocks of the universe… Oh!