On Flipboard. That Dire Helium Shortage? Vastly Inflated. The Large Hadron Collider, a welder’s workshop, a nuclear reactor, an MRI, and a birthday party all share a common element. 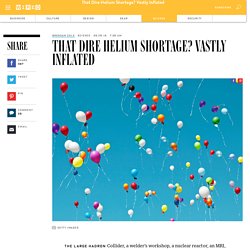 Literally: All of them need helium. Liquid or gaseous, room temperature or near absolute zero, the world uses up about 8 billion cubic feet of this noblest of gases every year. And you may have heard that we’re running out.

Deep sea mining – the gold rush on the ocean floor. Medallion’s strategy to challenge rare earth industry status quo. Tasman and Flinders seek merger — and lay down road-map for the critical metals sector. In what seems a striking new strategy, graphite and rare earths projects (and possibly tungsten, too) on Europe’s doorstep are to be merged into a new entity. 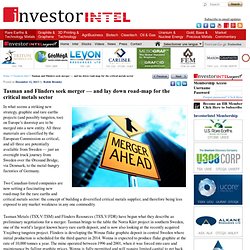 All three materials are classified by the European Commission as critical, and all three are potentially available from Sweden — just an overnight truck journey from Sweden over the Øresund Bridge, via Denmark, to the metal-hungry factories of Germany. Two Canadian-listed companies are now setting a fascinating new road-map for the rare earths and critical metals sector: the concept of building a diversified critical metals supplier, and therefore being less exposed to any market weakness in any one commodity. Tasman Metals (TSX.V:TSM) and Flinders Resources (TSX.V:FDR) have begun what they describe as preliminary negotiations for a merger.

Pioneering Rare Earths Producer Lynas is Years Ahead of Competition. Australia’s Lynas Corporation Limited (ASX: LYC | OTCQX: LYSDY) has the rare and esteemed distinction of being a rare earth element operational miner and a producer. 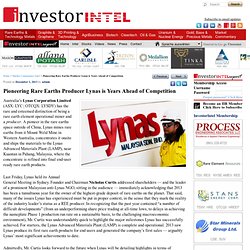 A pioneer in the rare earths space outside of China, Lynas mines rare earths from it Mount Weld Mine in Western Australia, concentrates it onsite and ships the materials to the Lynas Advanced Materials Plant (LAMP), near Kuantan in Pahang, Malaysia, where the concentrate is refined into final end-user ready rare earth products. Last Friday, Lynas held its Annual General Meeting in Sydney. Founder and Chairman Nicholas Curtis addressed shareholders — and the leader of a prominent Malaysian anti-Lynas NGO, sitting in the audience — immediately acknowledging that 2013 has been a tumultuous year for the owner of the highest-grade deposit of rare earths on the planet. Admittedly, Mr. Curtis looks forward to the future when Lynas will be detailing highlights in terms of production, sales and financials. Mr. In closing, Mr. China to Begin Trial Run of Rare Earth Products Exchange. Texas Rare Earth Resources releases robust revised PEA to confirm position as an American critical rare earth leading explorer. 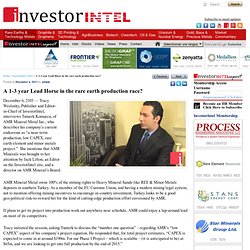 She mentions that AMR Minerals was brought to her attention by Jack Lifton, an Editor on the InvestorIntel site, and a director on AMR Mineral’s Board. AMR Mineral Metal owns 100% of the mining rights to Heavy Mineral Sands-like REE & Minor Metals deposits in southern Turkey. Rare Earth & Critical Minerals Week-in-Review: the saga continues...have we finally hit the bottom? 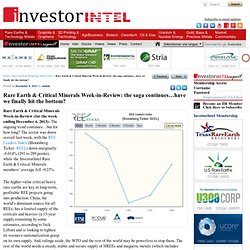 The sector was down overall last week, with the REE Leaders Index (Bloomberg Ticker: REEL) down marginally -0.014% (293 to 289 points), while the InvestorIntel Rare Earth & Critical Minerals members’ average fell -0.23%. The higher-value critical/heavy rare earths are key in long-term, profitable REE projects going into production. China, the world’s dominant source for all REEs, has a limited supply of the criticals and heavies (a 15-year supply remaining by some estimates, according to Jack Lifton) and is looking to tighten its resource-nationalization grasp on its own supply.

And, rulings aside, the WTO and the rest of the world may be powerless to stop them. The rest of the world needs a steady, stable and secure supply of HREEs and magnetic metals (which includes LREEs). Why the urgent need of REE projects outside of China? Focus Graphite Inc. U.S. Yale Study says we're a long way from finding substitutes for rare earth elements. Here’s some much needed good news for rare earths (and critical metals in general, even most non-critical ones). 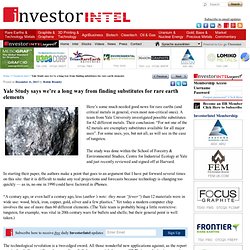 A team from Yale University investigated possible substitutes for 62 different metals. Their conclusion: “For not one of the 62 metals are exemplary substitutes available for all major uses”. For some uses, yes, but not all, as will see in the case of tungsten. The study was done within the School of Forestry & Environmental Studies, Centre for Industrial Ecology at Yale and just recently reviewed and signed off at Harvard. In starting their paper, the authors make a point that goes to an argument that I have put forward several times on this site: that it is difficult to make any real projections and forecasts because technology is changing too quickly — as in, no one in 1990 could have factored in iPhones. Subscribe here to receive free daily InvestorIntel updates The technological revolution is a two-edged sword. Rare earth metal shortage a 'ticking time-bomb' Joins research effort to solve shortage of rare earth metals critical to U.S. energy security.

November 15, 2013 WEST LAFAYETTE, Ind. - Researchers at Purdue University are part of a consortium of national laboratories, industry and other universities forming the Critical Materials Institute - a new national research hub focused on developing solutions to the shortages of rare earth metals and other materials critical for U.S energy security. 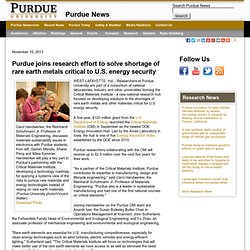 A five-year, $120 million grant from the U.S. Department of Energy launched the Critical Materials Institute (CMI) in September as the newest DOE Energy Innovation Hub. Led by the Ames Laboratory in Iowa, the hub is one of five Energy Innovation Hubs established by the DOE since 2010. Purdue researchers collaborating with the CMI will receive up to $2.5 million over the next five years for their work. A Scarcity of Rare Metals Is Hindering Green Technologies by Nicola Jones. 18 Nov 2013: Report by nicola jones With the global push to reduce greenhouse gas emissions, it’s ironic that several energy- or resource-saving technologies aren’t being used to the fullest simply because we don’t have enough raw materials to make them. 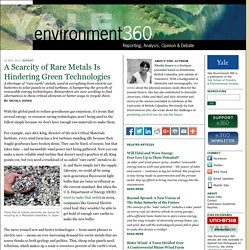 For example, says Alex King, director of the new Critical Materials Institute, every wind farm has a few turbines standing idle because their fragile gearboxes have broken down. They can be fixed, of course, but that takes time – and meanwhile wind power isn’t being gathered.