Preposition and postposition. Prepositions and postpositions, together called adpositions, are a class of words that express spatial or temporal relations (in, under, towards, before) or marking various semantic roles (of, for).[1] A less common type of adposition is the circumposition, which consists of two parts that appear on each side of the complement. 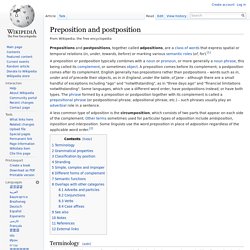 Other terms sometimes used for particular types of adposition include ambiposition, inposition and interposition. Interjection. Distinctions[edit] Interjections may be subdivided and classified in several ways. 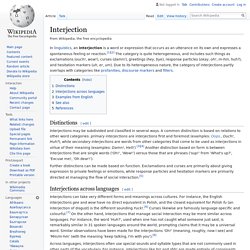 A common distinction is based on relations to other word categories: primary interjections are interjections first and foremost (examples: Oops., Ouch! , Huh?)

Conjunction (grammar) The definition may also be extended to idiomatic phrases that behave as a unit with the same function, e.g. 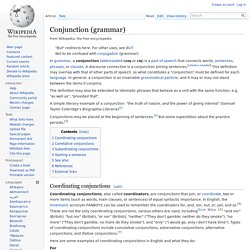 "as well as", "provided that". A simple literary example of a conjunction: "the truth of nature, and the power of giving interest" (Samuel Taylor Coleridge's Biographia Literaria)[1] Conjunctions may be placed at the beginning of sentences.[2] But some superstition about the practice persists.[3] Here are some examples of coordinating conjunctions in English and what they do: Glossary of English grammar and usage terms. Adjective: a word, phrase, or clause that describes a noun or pronoun. 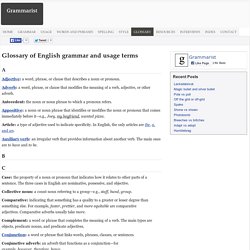 Coordinate adjectives are adjectives that appear in sequence with one another to modify the same noun. 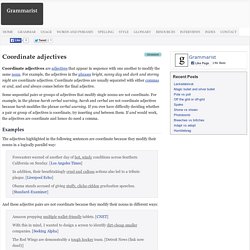 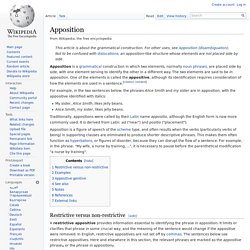 The two elements are said to be in apposition. One of the elements is called the appositive, although its identification requires consideration of how the elements are used in a sentence. [citation needed] For example, in the two sentences below, the phrases Alice Smith and my sister are in apposition, with the appositive identified with italics: Constructing Sentences: Parts of Speech. Constructing Sentences: Parts of Speech Words are traditionally classified into eight types, called parts of speech. 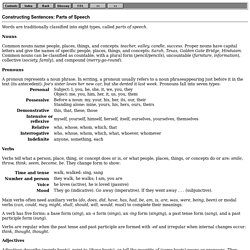 Nouns. Preposition and postposition. Adverb. Adverbs are traditionally regarded as one of the parts of speech. 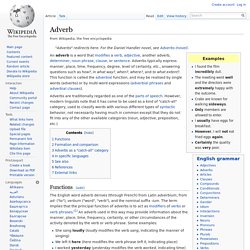 Adjective. In linguistics, an adjective is a describing word, the main syntactic role of which is to qualify a noun or noun phrase, giving more information about the object signified.[1] Etymology[edit] Adjective comes from Latin (nōmen) adjectīvum "additional (noun)",[2] a calque of Ancient Greek: ἐπίθετον (ὄνομα) epítheton (ónoma) "additional (noun)".[3][4] In the grammatical tradition of Latin and Greek, because adjectives were inflected for gender, number, and case like nouns (a process called declension), they were considered a subtype of noun. 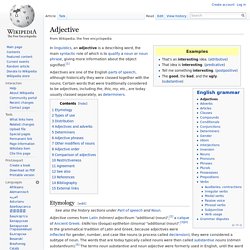 The words that are today typically called nouns were then called substantive nouns (nōmen substantīvum).[5] The terms noun substantive and noun adjective were formerly used in English, until the word noun came to refer only to the former type, and the second type came to be known simply as adjectives. Pronoun. In linguistics and grammar, a pronoun is a word that substitutes for a noun or noun phrase. 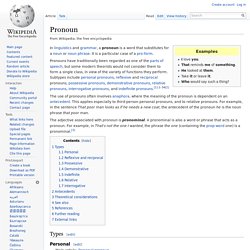 It is a particular case of a pro-form. Pronouns have traditionally been regarded as one of the parts of speech, but some modern theorists would not consider them to form a single class, in view of the variety of functions they perform. Subtypes include personal pronouns, reflexive and reciprocal pronouns, possessive pronouns, demonstrative pronouns, relative pronouns, interrogative pronouns, and indefinite pronouns.[1]:1–34[2] The adjective associated with pronoun is pronominal. A pronominal is also a word or phrase that acts as a pronoun. Verb. Agreement In languages where the verb is inflected, it often agrees with its primary argument (the subject) in person, number, and/or gender.

With the exception of the verb to be, English shows distinctive agreements only in the third person singular, present tense form of verbs, which are marked by adding "-s" ( walks) or "-es" (fishes). The rest of the persons are not distinguished in the verb (I walk, you walk, they walk, etc.). Noun. History [edit] Word classes (parts of speech) were described by Sanskrit grammarians from at least the 5th century BC. In Yāska's Nirukta, the noun (nāma) is one of the four main categories of words defined.[4] Definitions of nouns[edit] Nouns have sometimes been defined in terms of the grammatical categories to which they are subject (classed by gender, inflected for case and number).

Such definitions tend to be language-specific, since nouns do not have the same categories in all languages. Verbal noun. A verbal noun is a noun formed from or otherwise corresponding to a verb. Different languages have different types of verbal noun and different ways of forming and using them. An example of a verbal noun in English is the word singing in the sentence "Singing is fun" (this is a noun formed from the verb sing). Infinitive. Infinitive is a grammatical term used to refer to certain verb forms that exist in many languages. As with many linguistic concepts, there is not a single definition applicable to all languages. The word is derived from Late Latin infinitivus, a derivative of infinitus meaning "infinite". Infinitives are used mostly as non-finite verbs. In traditional descriptions of English, the infinitive is the basic dictionary form of a verb when used non-finitely, with or without the particle to.

Thus to go is an infinitive, as is go in a sentence like "I must go there" (but not in "I go there", where it is a finite verb). Transitions (linguistics) Elements in a coordinate relationship are equal in rank, quality, or significance. To show a link between equal elements, use a coordinating transition. To show similarity or reinforce: and, also, too, similarly, equally, identically, equally important, together with, not only ... but also, coupled with, in the light of, not to mention, as well as, furthermore, moreover, in the same fashion/ way, likewise, comparatively, correspondingly, by the same token, uniquely, to say nothing of.To introduce an opposing point: but, however, yet, on the contrary, on the other hand, in contrast, still, neither, nor, nevertheless, notwithstanding, besidesTo signal a restatement: that is, in other words, in simpler terms, to put it differently, English Transitional Words Database Rappaport, Bret (2010).

"Using the Elements of Rhythm, Flow, and Tone to Create a More Effective and Persuasive Acoustic Experience in Legal Writing" (PDF). Postposition - Definition and Examples.