Afro-Latin American and Afro-Latinx Art Historical Resources. BlacKKKShakespearean: A Call to Action for Medieval and Early Modern Studies – Profession. Two specters are haunting the study of the literature, culture, and history of the pre- and early modern periods. 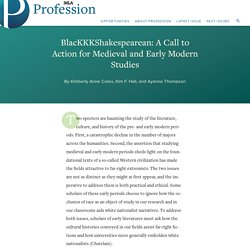 First, a catastrophic decline in the number of majors across the humanities. Second, the assertion that studying medieval and early modern periods sheds light on the foundational texts of a so-called Western civilization has made the fields attractive to far-right extremists. The two issues are not as distinct as they might at first appear, and the imperative to address them is both practical and ethical. Some scholars of these early periods choose to ignore how the occlusion of race as an object of study in our research and in our classrooms aids white nationalist narratives.

To address both issues, scholars of early literatures must ask how the cultural histories conveyed in our fields assist far-right fictions and how universities more generally embolden white nationalists (Chatelain). Currently, overwhelmingly: White scholars cite each other’s work. Start Early Notes 1. 2. Church of St. George, Ethiopia. Scholars Respond to an Exhibition about Medieval Prejudice. The Crucifixion (detail with Ecclesia and Synagoga), 1170s, from the Stammheim Missal, unknown illuminator, made in Hildesheim, Germany. 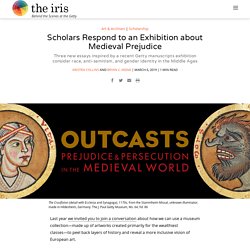 The J. Paul Getty Museum, Ms. 64, fol. 86 Last year we invited you to join a conversation about how we can use a museum collection—made up of artworks created primarily for the wealthiest classes—to peel back layers of history and reveal a more inclusive vision of European art. The online dialogue about the exhibition Outcasts: Prejudice and Persecution in the Medieval World inspired us to take action in two ways.

First, in response to requests to provide more digital resources around the exhibition, we invited three prominent scholars to expand on three of its themes: race, anti-semitism, and gender identity. Second, we began to organize another exhibition, Balthazar: A Black African King in Medieval and Renaissance Art (November 19, 2019–February 16, 2020), inspired by visitors’ reactions to and questions about Outcasts. Geraldine Heng Anthony Bale. Outcasts. More Details on Exhibition-in-Progress on Outcasts of the Medieval World. We recently posted about an exhibition-in-development, scheduled to open in January 2018, that examines images of “out-groups” in illuminated manuscripts. 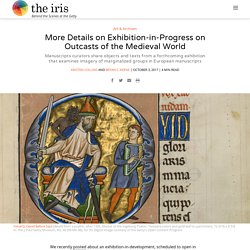 We were both grateful for and energized by the numerous comments here on The Iris, as well as on Twitter and Tumblr. We have taken many of your suggestions to heart and continue to refer to them as we make edits to the exhibition. For those of you who have followed our project with interest, we would like to share some of our work on the show, highlighting four of the objects we have selected for the show and our draft texts for the wall labels that will accompany them in the exhibition space. 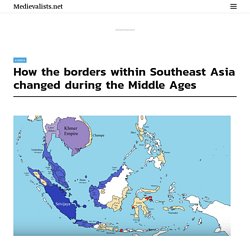 Here are seven videos that explain the changing borders. EmperorTigerstar begins this set by offering an examination of the region, starting in ancient times, and going every year starting in 500 AD: Ollie Bye has created this video, focusing on the Malay Archipelago, the lands of which now form countries such as Indonesia and Malaysia. This Youtuber has also created a video on Vietnam, starting in 300 BCE, and going every year from 1400: Anwoo History Mapper has created several maps, starting with this one on Thailand from the years 300 to 2018: Taking A Magnifying Glass To The Brown Faces In Medieval Art : Code Switch : NPR. Uncovering the African Presence in Medieval Europe. People of Color in European Art History: Archive. Race & medieval studies: a partial bibliography. The Story of the Black King Among The Magi. LOS ANGELES — “Away in a manger, no crib for a bed.” 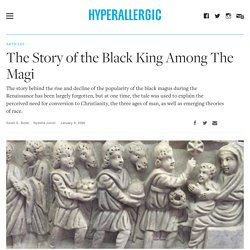 When we think of baby Jesus at Christmas, we may typically think of a nativity scene. Whether comprised of gingerbread, porcelain, or live performers, such nativity scenes usually include Mary, Joseph, and the baby Jesus surrounded by shepherds, angels, and assorted farm animals. Those bringing gifts to the baby Jesus are three magi or wise men, one of whom is frequently depicted as a black man. His inclusion illustrates the complexities of blackness in different time periods and locations.

He is both a token addition and a celebrated king. This traditional crowded nativity scene is not depicted in the New Testament gospels but constitutes a mash-up of different accounts of the birth of Jesus. While magi were understood to be wise men from the East, one magus becomes regarded as “black” as early as the 13th century. John Blanke - John Blanke Project.